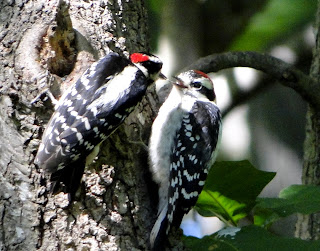 Downy Woodpeckers
I've been seeing lots of birds feeding their young at the birdfeeder--cardinals, downies, and red-bellied woodpeckers. This photo is of a downy father who had cracked the sunflower seed in the hole of the tree and then fed the baby. Later I saw the pair on the suet cake, the baby not feeding but waiting for the dad to give him his meal.

Solar Projects and the Gulf

With the disastrous oil gusher in the Gulf, I have been thinking a lot about the poor state of the environment. The Gulf will take decades to return but never to its former pristine state. With over 4000 oil rigs in the Gulf of Mexico and companies suing the government to stop the deep water drilling moratorium (which only affects 35 drilling rigs!!), I feel helpless.

However, I was browsing some blogs (mainly Green Gal--see blog roll on right) and looking at several of her listed blogs. They made me feel a little better--lots of young people are trying to lead a green life, building their own homes, gardening, cycling, and recycling. Further, there are a lot of elder folks who have lived that way since the 70s. I was privledged to meet at few at the Naturalist Rally at Mt. Rogers (see post). 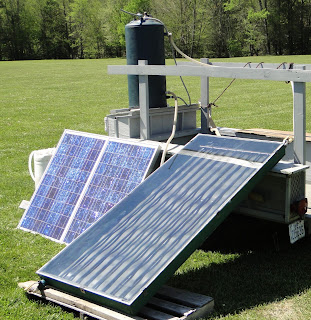 This solar water heating system was made by a retired man and was demonstrated at the Mt. Rogers Naturalist Rally last month. The two photovoltaic panels power the pump. The water flows through the PVC tubing against the black background, heating it quickly and then flows into the green water tank.

The elderly man said that this basic system is made of materials available at the hardware store. These solar systems were common in the 1930s before electricity was cheap and heavily promoted by industry and the government. 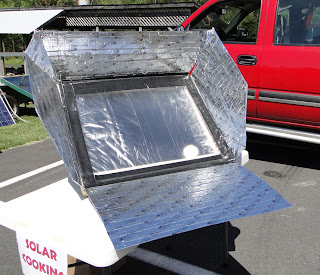 His wife demonstrated this solar oven, made of cardboard and aluminum foil. She and her husband travel to Africa to promote using solar ovens as a way to decrease deforestation.

I bought a sun oven a few years ago and have used it sporadically but did use it when I came home from the rally--it will bake brownies and make a good melted cheese sandwich but it's too small for much else. The highest temperature I recorded was 350 degrees.

Spurred by the oil spill, I also bought a battery-powered electric mower (Neutron). I figured I had to do something to use less oil. I ended up liking it much better than the gasoline mower--lighter and quieter. Also, there is no chance of spilling gasoline or oil which can leak into the ground.
Posted by Appalachian Lady at 4:20 PM 2 comments: 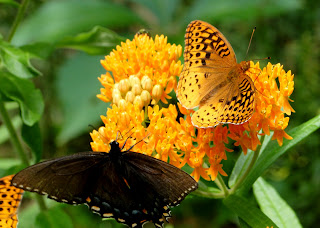 Every year, I enjoy watching the butterflies on the orange butterfly plant (or weed). It's a milkweed, about 2 feet tall. I usually see my first monarch on it in June or July. 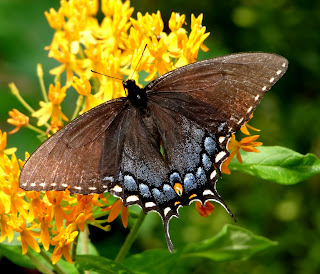 The Spicebush Butterfly was the only one while I counted as many as 10 Great Spangled Butterflies at one time on the butterfly plants. 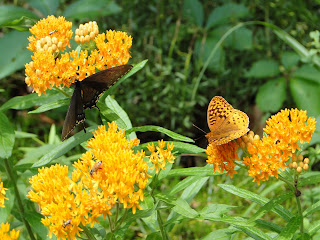 My colony of honey bees dispatched only one bee to work the milkweed. I saw two other types of wild bees--one copper-colored and the other green. 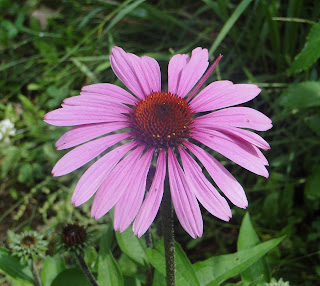 The purple cone flower is native and another favorite of butterflies. I decided to plant it only after seeing honey bees on it at Lowe's.

I have always planted flowers but now I try to plant more native species or those that bees, butterflies, and hummingbirds like.

Note: I started this post last night while doing a presentation on nature journals and blogs at Mountain Lake Hotel last evening. On my way there, I saw a baby turkey in the road--it was able to fly to its mother a few feet away. Wished I had gotten a photo!

On May 13, I went birding with a small group of local birders at Woods Hole, a hostel/bed and breakfast for Appalachian hikers (I know I am way behind on posting!).

Woods Hole is above 3000 feet elevation so you don't see cardinals or goldfinches I was told. We did see and hear plenty of birds including wood thrushes, rose-breasted grosbeaks, red-eyed vireos and others. 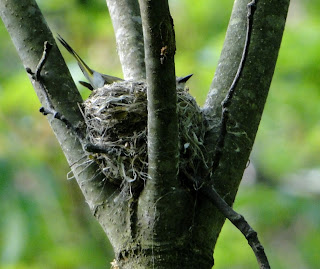 I wasn't good at identifying the birds from their songs like others were but I did spot this little tiny nest in a tree only a few feet from us. That's exciting. 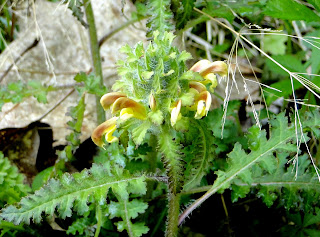 I have seen this flower before at Mountain Lake where it's typically reddish. Of course, I couldn't remember the name at the time. I figured it was in the snapdragon family and so it was easy to look up. 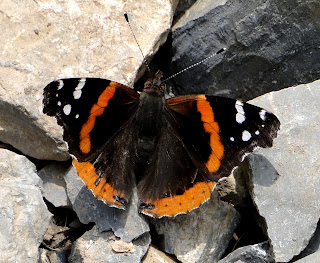 I had been seeing this butterfly for a few days at my house before I snapped this picture at Woods Hole. It will probably be flying around all summer according to my field guide. 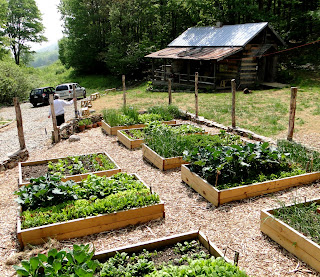 After we birded for awhile, we enjoyed a good breakfast (home-made biscuits and sausage with country eggs from down the road). From the front porch, I admired the great garden--this area was just one part of it. In the background is the log cabin that the owner's grandfather built for the hikers. We saw several wirey-legged hikers enjoying the owner's coffee which she roasts and grinds there. 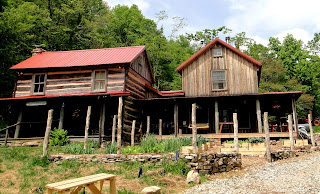 Looking toward the front porch where I stood before, you can see the house itself which is a log cabin dating back to the 1880s. The new addition (on the right) was completed last year. It has two bedrooms with shared bath they rent out, breakfast included.

I thought the builders did a great job of integrating the old and new structures. Also, from this view, you see the stone wall and fence which keeps the deer out of the raised beds. I wish I had photographed the great rock wall behind the house. They needed it to protect the house from run-off. The water flows into a pond which is to the right of this photo. The pond, which was flooded out in March, was built again and is now surrounded by blueberry bushes. I admire (and envy) the tremendous energy and hard work of the owners of Woods Hole.
Posted by Appalachian Lady at 3:36 PM 13 comments: