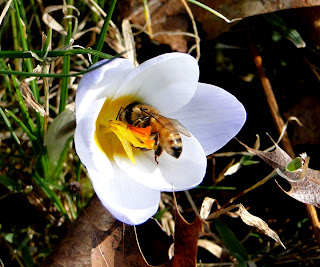 It is a chilly and rainy day in the Appalachians with temperatures in the 40s. Still, it has been unseasonably warm and dry. The rain is welcome as the fire danger has been very high with over 4000 wild fires reported in Virginia.

The honey bees have been foraging pollen in the past week. They get a little pollen from the few crocuses I have been blooming. From what I learned from local beekeepers, they are also foraging on willow and alder which generally grows near waterways--over a mile away. 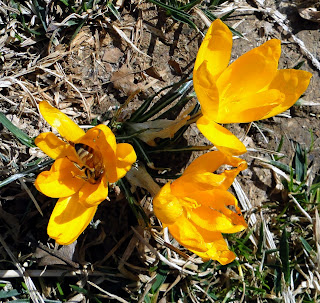 This yellow crocus bloomed yesterday while the snow crocuses pictured at the top have been blooming for a week. Now that I know bees like crocuses, I will buy a bunch next fall. I don't want them to have to fly a mile away to the willows if they can forage right near their hive. 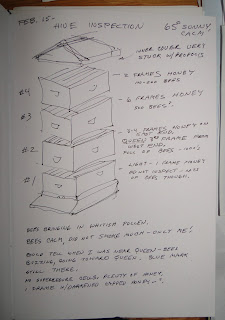 I inspected the beehive last Thursday (I noticed my journal date was wrong!)--first time since last fall. My main task was to see if they had enough winter stores of honey. They appeared to have plenty--many frames still uneaten. There was some pollen stores but since I have been seeing them bring in pollen, that might be alright. I did a varroa mite check--leaving the mite board in for a week and only saw a couple of mites so that's good. I did not see any signs of other problems like nosema. It's hard to estimate the number of bees but it's over 10,000. That should be alright if the queen has been laying eggs.

I did find the queen in the second box because she is still marked from my mentor last summer. She might have been laying eggs but I wasn't about to brush away bees to see. I carefully put that frame back into the box. I just lifted the bottom box (light probably no honey but with lots of bees) and put the whole hive back together.

Back at the house, I wrote notes in my journal right away. The journal page you see above is very different from what some beekeepers do. It is not super detailed but it has enough information for me. I also am very visual so drawing the hive components lets me put notes right where I found something to note. Doing my notes afterwards allows for a quick inspection, probably no more than 20 minutes. 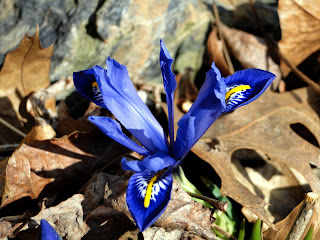 Dutch iris bloomed yesterday for the first time. These little bulbs only last a few days but are appreciated because they bloom so early when a week of warm weather comes around.

As I was walking in the woods, I saw a bat fly very low from the direction of our house into the woods. This is way too early for bats to come out of hibernation. I have learned that the fungus (another nosema) that is killing the bats in the east makes them come early out of hibernation and the bats perish from starvation. I hope that bat I saw doesn't die. 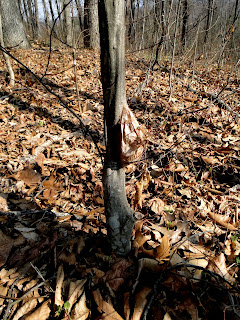 What is this growth on this small American Beech tree? 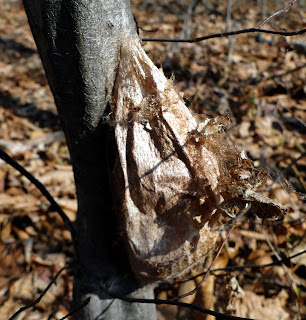 It's about 5 inches long and papery with something inside. I think it is some type of pupae that is overwintering. Does anyone have any ideas? 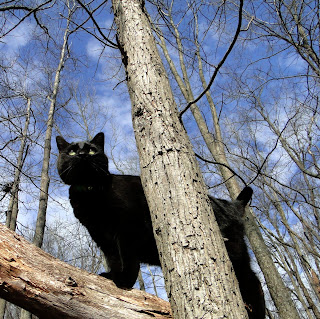 My cat, Sophie, loves to walk in the woods with me where she can climb up as high as she can get.

With days like these, spring cannot be far behind!
Posted by Appalachian Lady at 4:03 PM 6 comments: 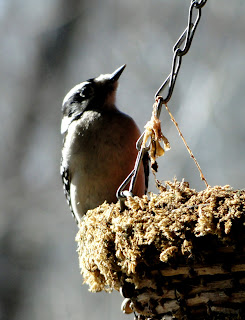 
This little downy came for some peanut butter I had put in this hanging planter. I can't wait for it to be warm enough to put some flowering plants in it. I looked this morning and all the peanut butter was gone so I replaced with sunflower seeds. 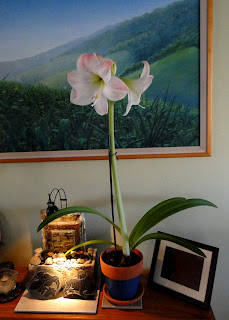 A friend gave us this giant amaryllis a few years ago. It has bloomed nicely ever since. It's especially welcome this time of the year when nothing is blooming outside. I have learned to let it bloom, die back, lay dormant for awhile in the basement. When it shows signs of growth, I bring it back up into the house and water it. 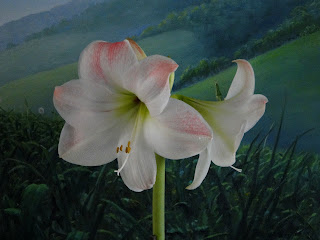 This close up is against my favorite painting done by Pat McKelvey who lived in this area years ago.
Posted by Appalachian Lady at 10:53 AM 7 comments:

As suggested by dAwN, I took a video outside today. The video starts with a view from the front porch, then the beehive, Kookie digging, and finally a white-throated sparrow. Excuse the shakiness on the sparrow. I should have used a tri-pod when using the telephoto. 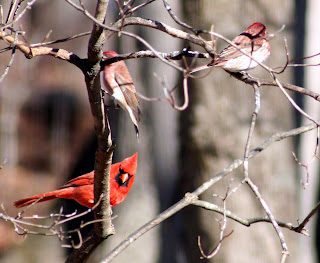 I know most of the country is experiencing some crazy winter weather. Snow in Dallas!! And, my relatives near St. Louis were snowed in a couple of days ago with Interstate 70 closed across Missouri. Unthinkable.

The winter has been fairly mild in our hollow. Last Saturday, the temperature rose to 65 degrees. My bees were flying further from the hive then I observed when the temperature was in the 40s. I found some on the compost pile. So, I sliced up a good orange and put it there just to see if they would eat it. 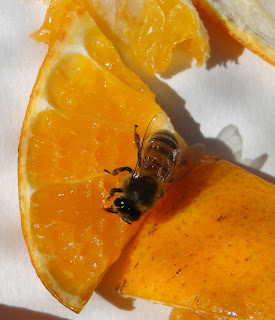 Within a few minutes, one bee landed on the cut orange slice and slurped up the juice like this was normal. That bee no doubt went back to the hive and communicated to the other bees via the waggle dance where the oranges were located (a short video explaining waggle dance is here). 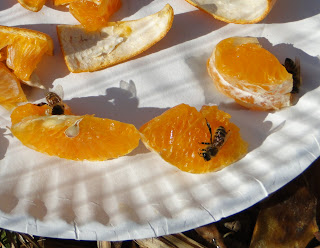 Evidently, the bee was successful in recruiting foragers. Within an hour, several bees were on the oranges.

After that experiment, I went on a walk through our woods. 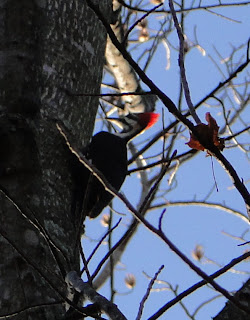 This pileated woodpecker landed on a tree nearby and made an alarm call. I didn't think he had seen me but then a few minutes later when I walked about 50 feet away, he did the same thing. He landed on a tree right in front of me, sounding more calls and then flew away quickly before I could take a photo. So, I guess he was telling me that these woods were his. 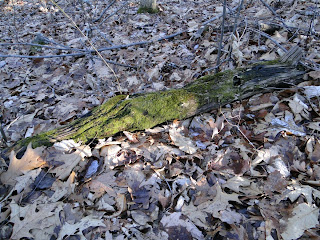 A winter walk in the woods is mostly brown so any green provides a strong contrast, such as this moss-covered log . . . 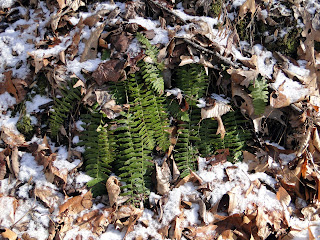 . . . or a Christmas Fern which stays green all winter. 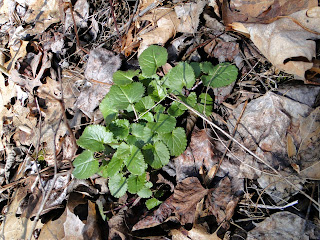 What most caught my eye the other day was the emerging leaves of the Golden Ragwort. This plant doesn't bloom until late spring but puts up leaves anytime it gets warm in late winter.

Maybe spring is just around the corner just like the groundhog predicted!
Posted by Appalachian Lady at 5:04 PM 4 comments: