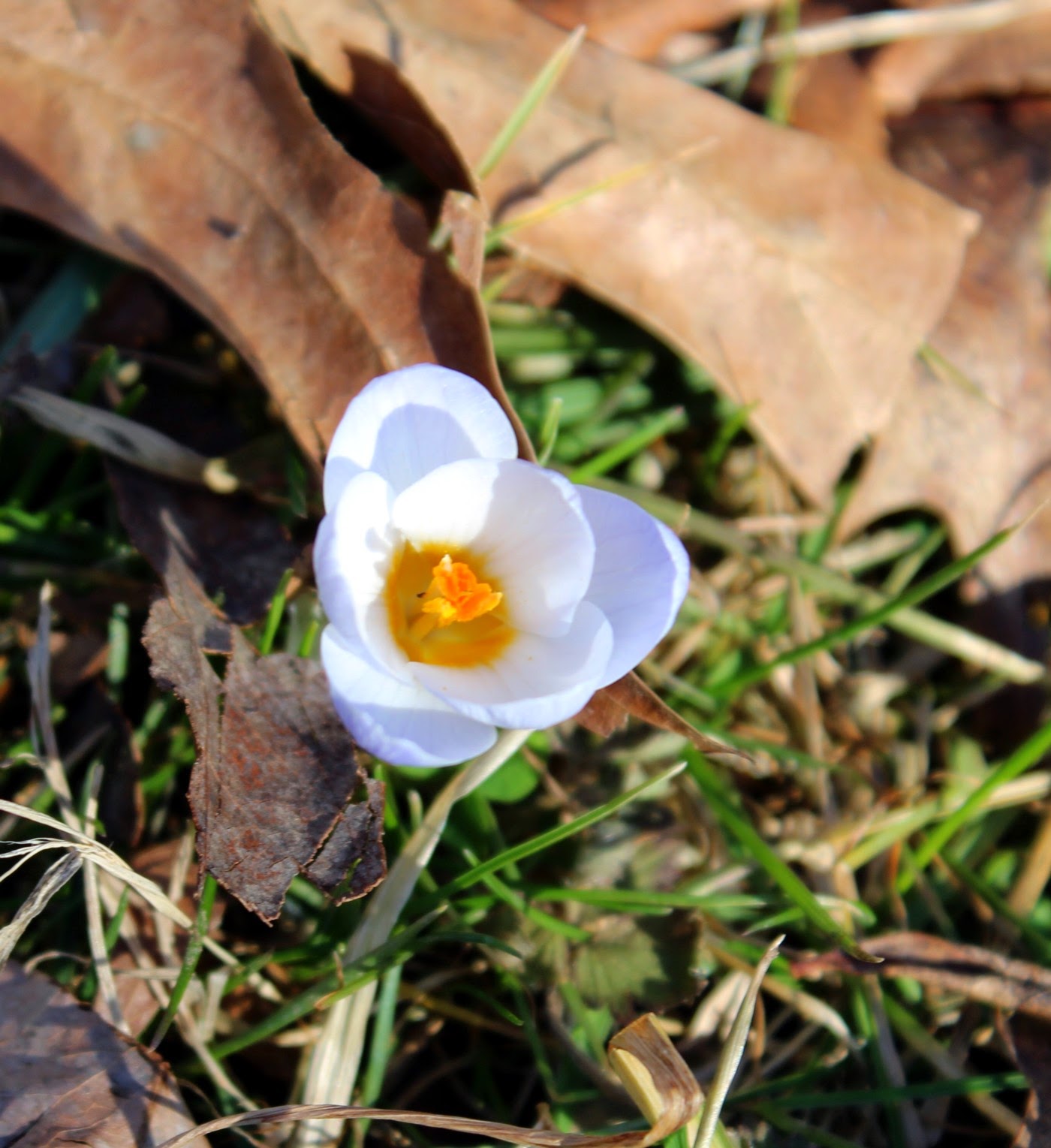 Our 19" of snow that fell February 12-13 began melting over the weekend.  By Thursday, February 20, it was mostly gone with only a few patches left.

On the way back from a meeting in town today, I saw a large flock of mostly red-winged blackbirds along Walker Creek.  Back home, I was delighted to see a couple of crocuses blooming. 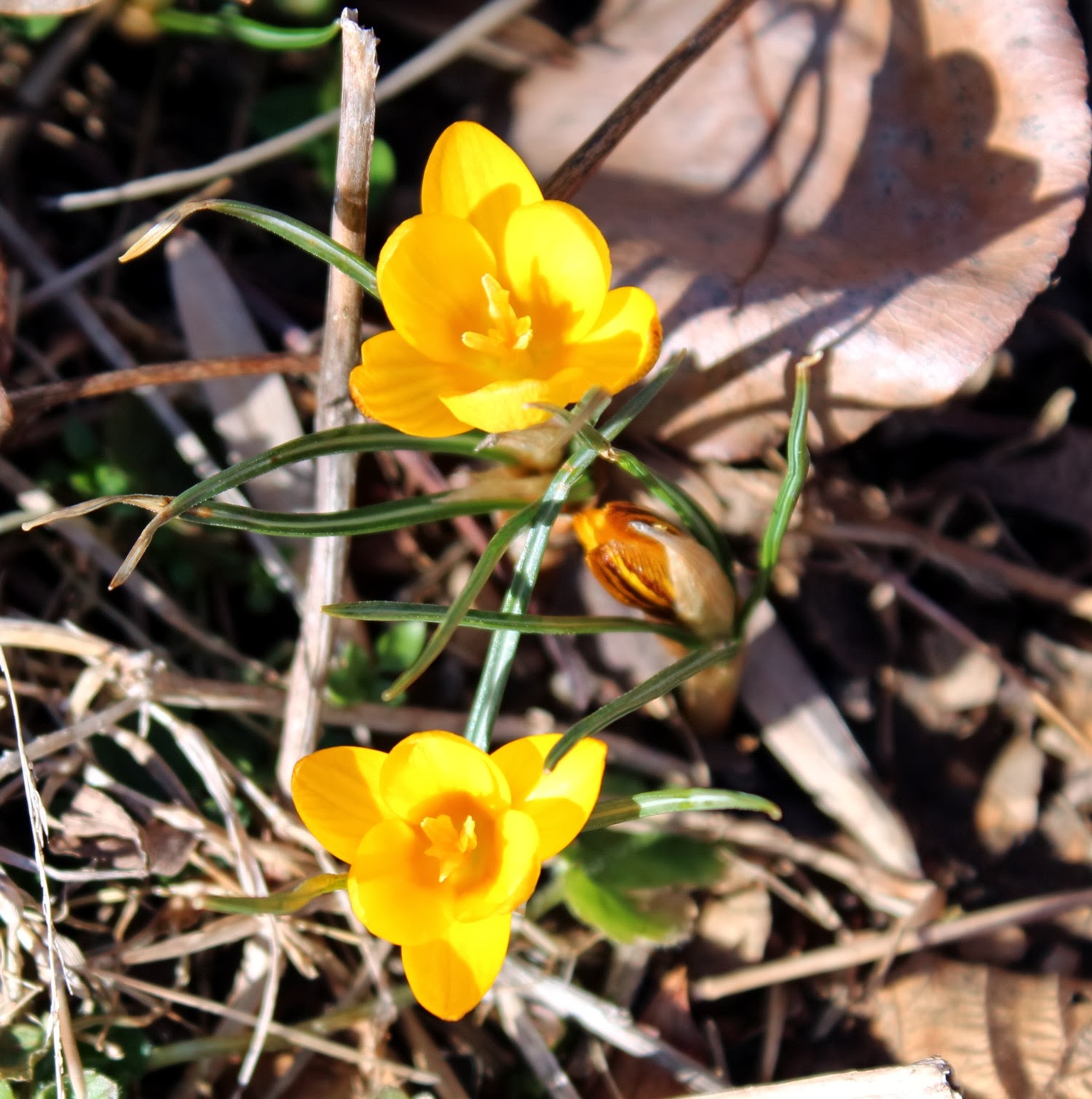 These are always the first to come up because they are right over the septic tank, a spot that is a little warmer than the rest of the soil in the yard. 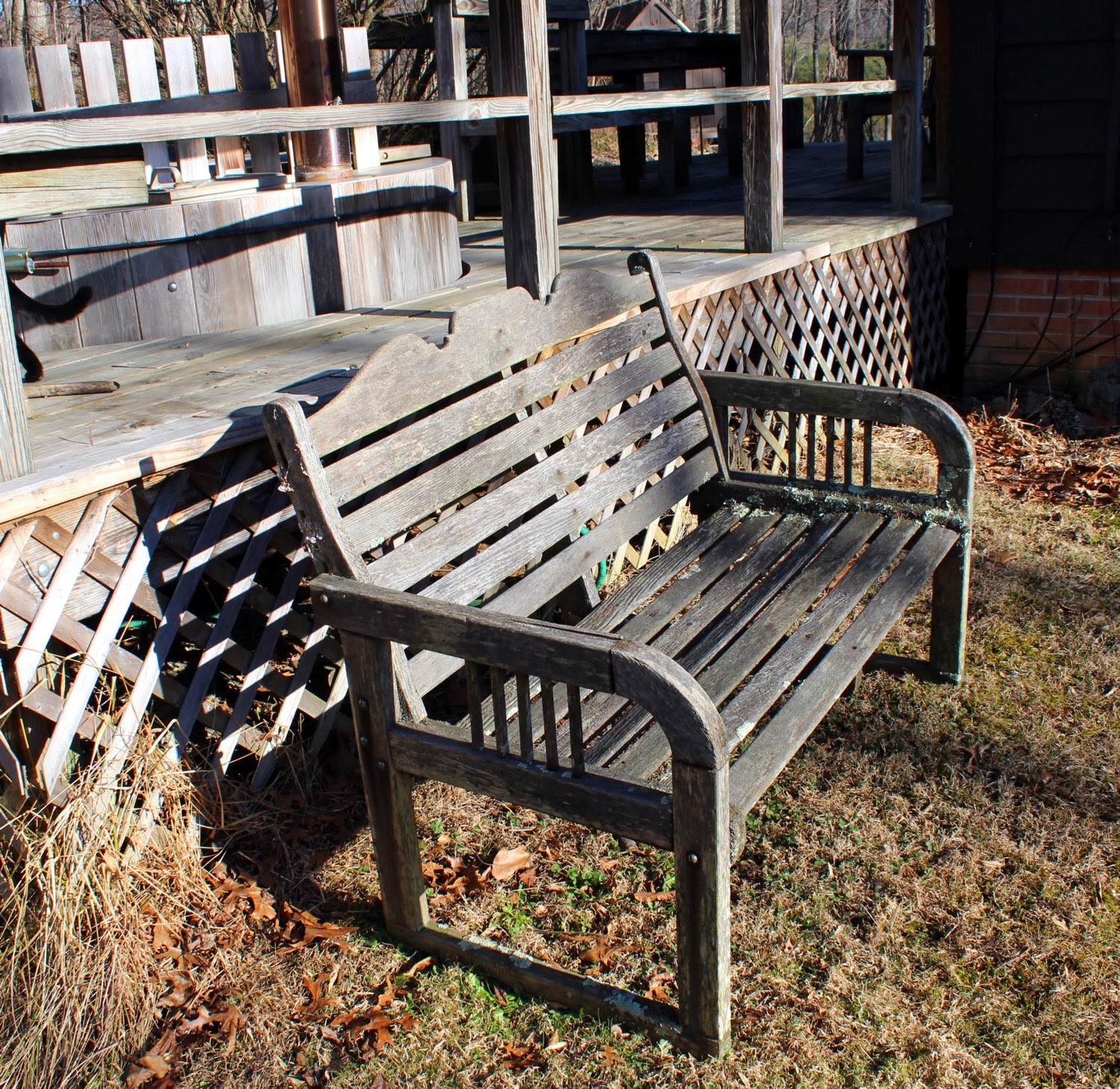 I sat in this cedar bench which we have had for a least 25 years.  I have never stained it so lichens grow on it. 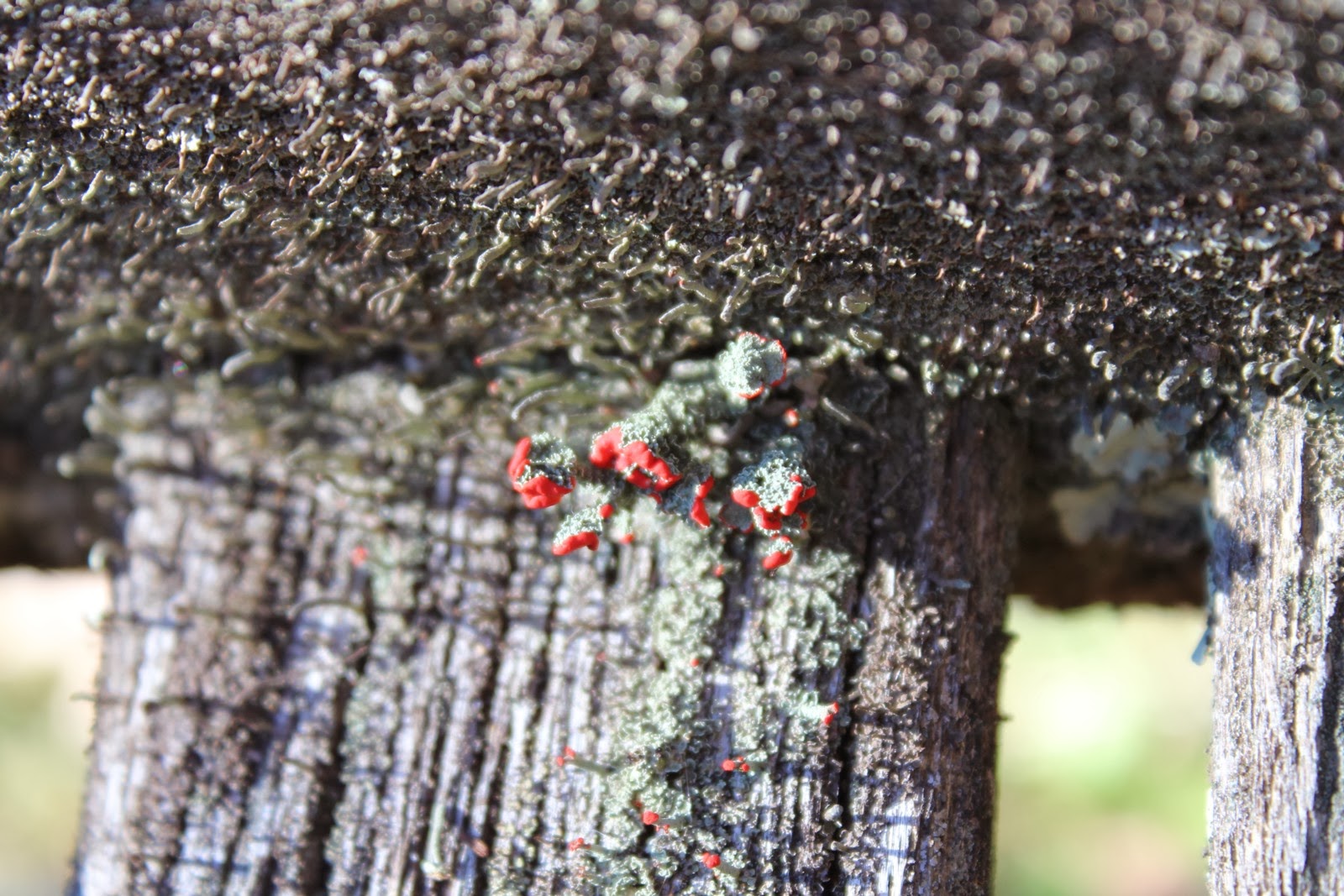 I guess it is eating away at the wood but I don't want to remove it. 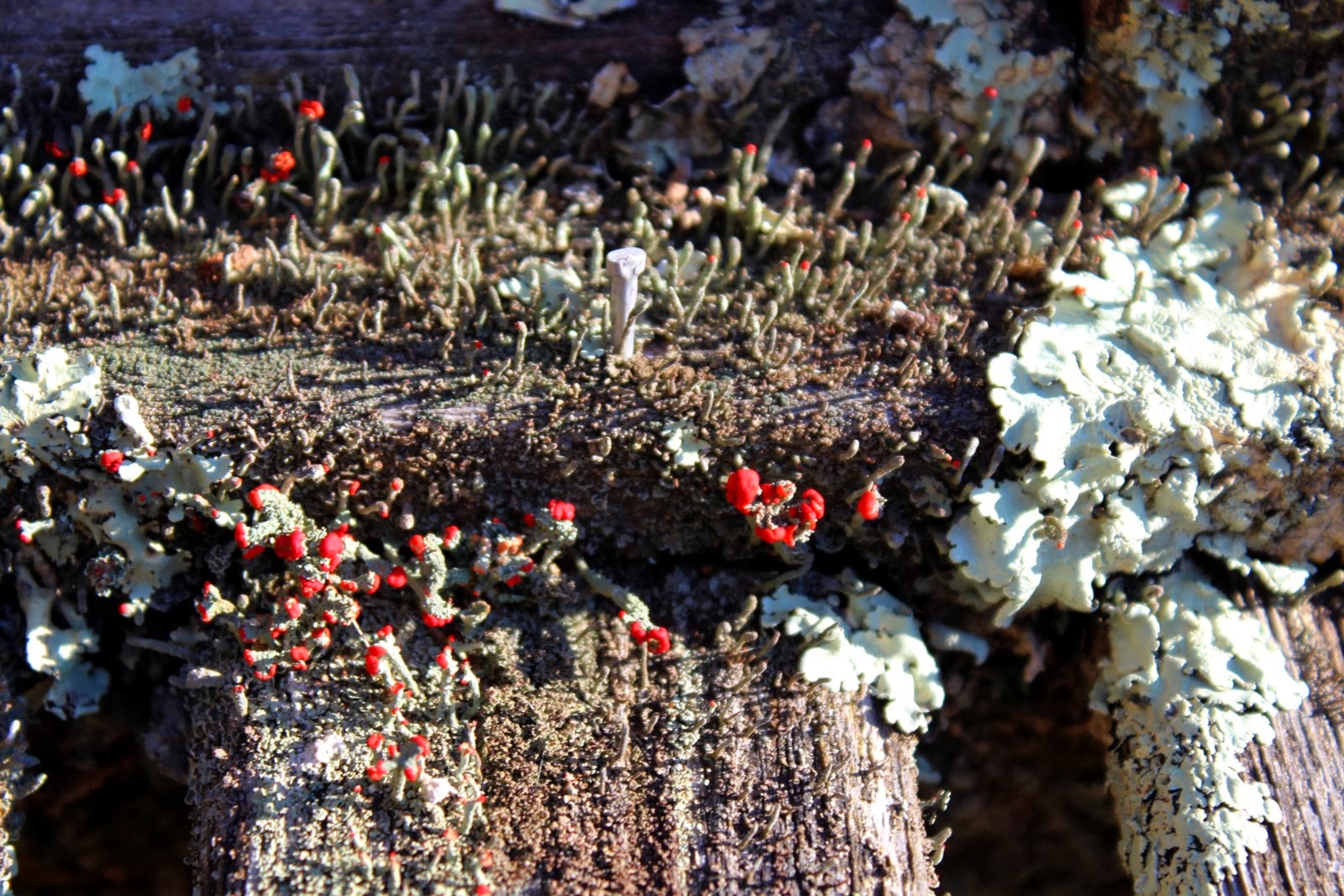 Here's a little garden of lichens.  I am not sure what the red is? 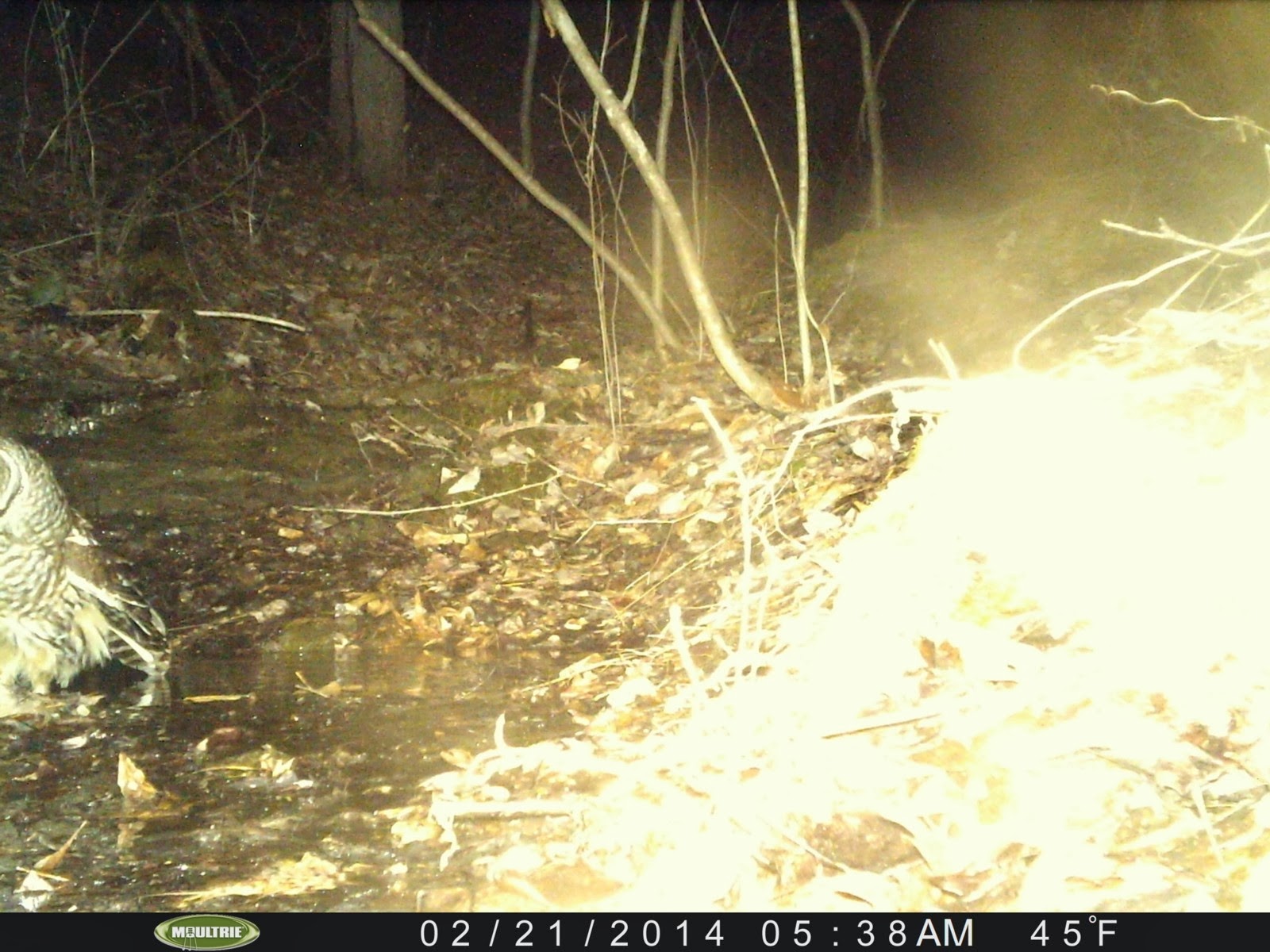 My wildlife camera did not take any photos of the snowstorm but this one yesterday is intriguing.  It looks like a turkey from the tail feathers.   Next time, I will position the camera right on the waterfall so as not to miss this shot.

Maybe I will hear the spring peepers tonight!
Posted by Appalachian Lady at 5:01 PM 4 comments:

This storm will be one that I will remember for a long time.  On TV, the weather forecaster said it would be the storm that people will remember about their childhood.

I measured a final 15 inches on our back deck but snow drifts were a lot deeper.  Officially, Giles County received 20-24 inches but that was more in the northern part of the county, especially up in the mountains. 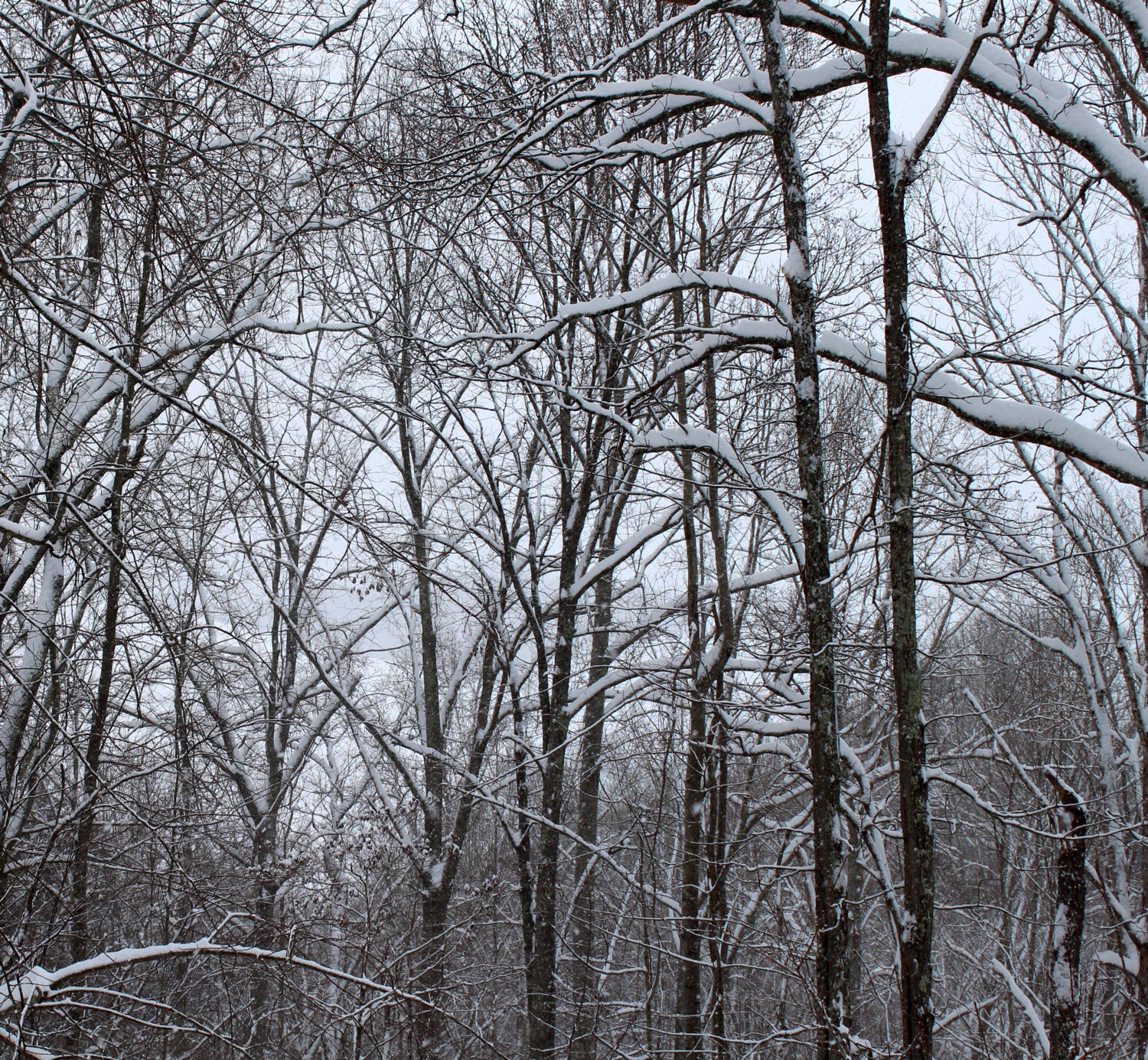 The snow began sticking to the trees Wednesday afternoon but we never lost power. 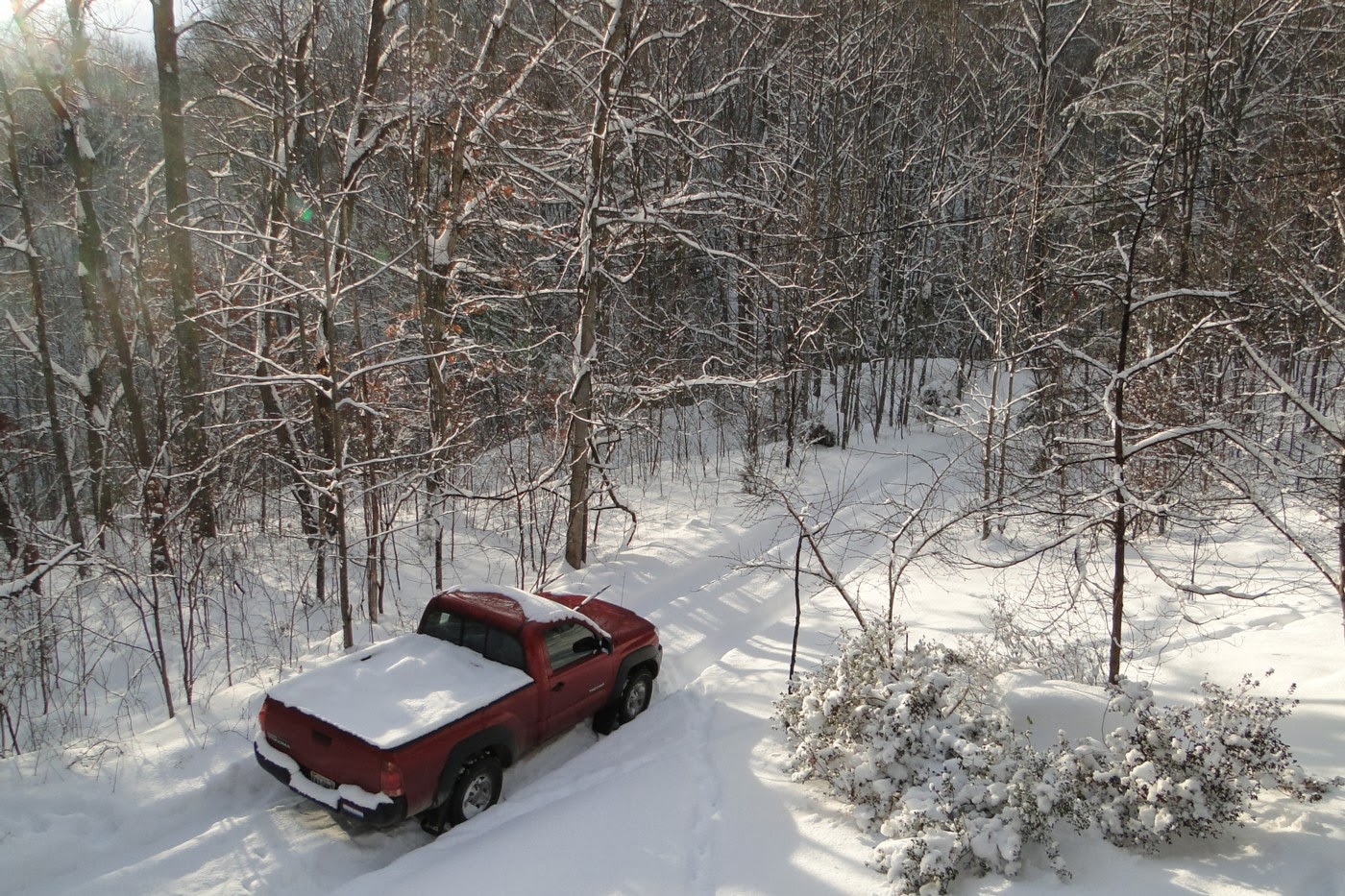 My husband drove his truck down the driveway, making tracks so we could get out. 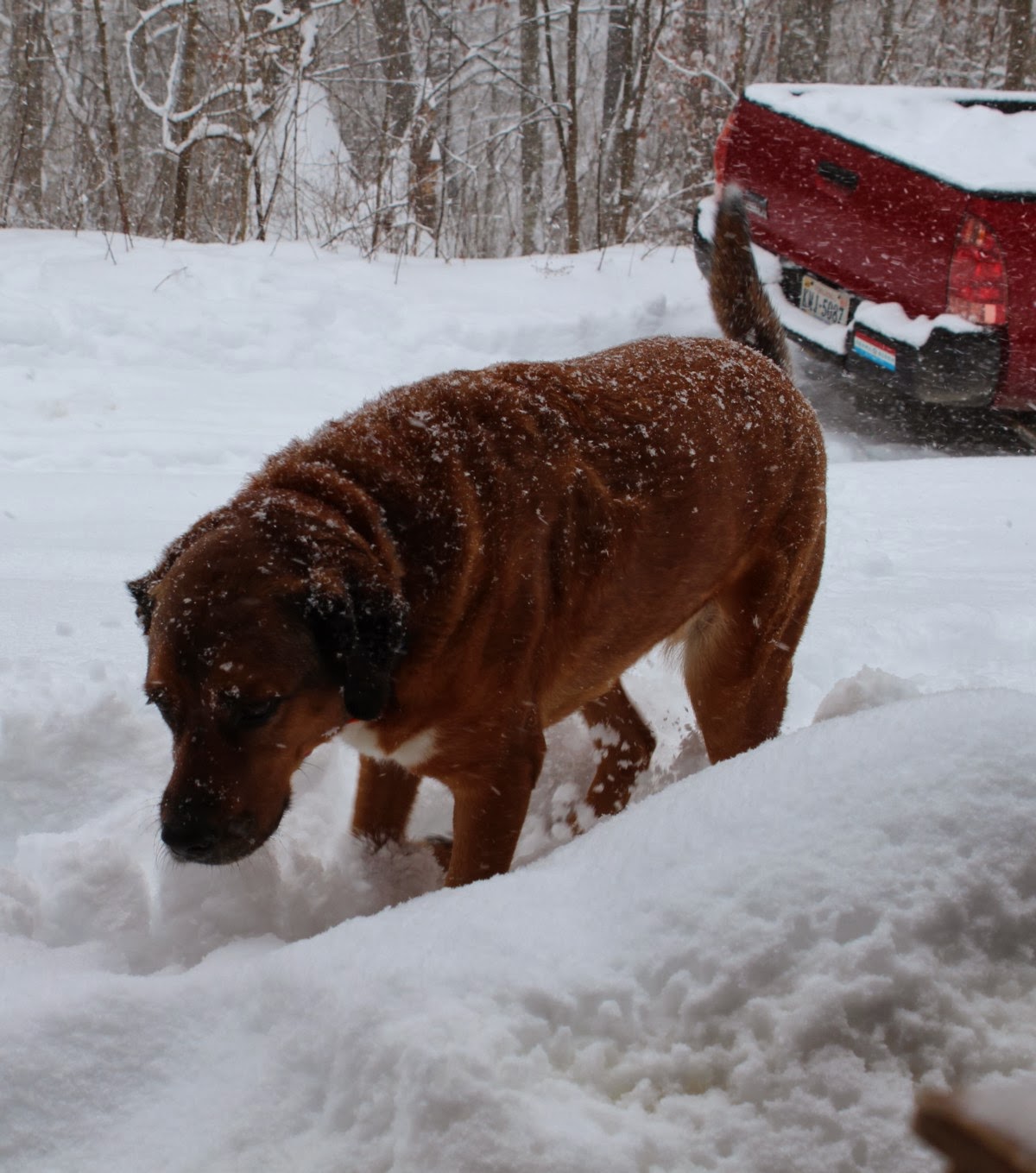 Kookie seemed to get tired of the snow after awhile. 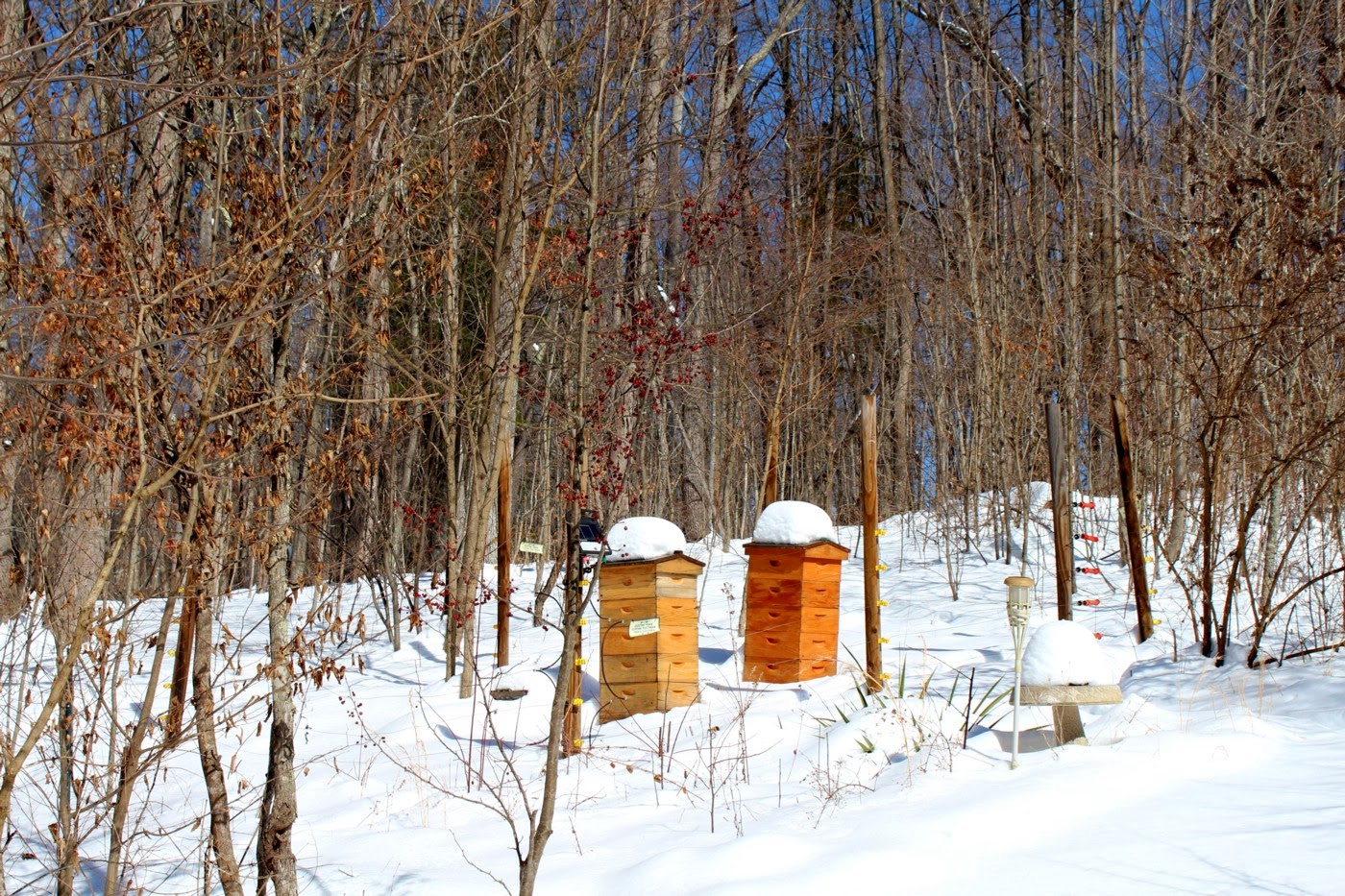 On Valentine's Day, I walked down the driveway, shooting a photo of the bee hives.  During the storm on Thursday, I cleared 4 foot snow drifts on the east side of the hives.  I was afraid the pressure might make the hives keel over.  One hive is slating forward while the other one is backward (or actually fairly level).  I cannot do anything with the hives until there is a very warm day though but I hope the bees survived the storm. 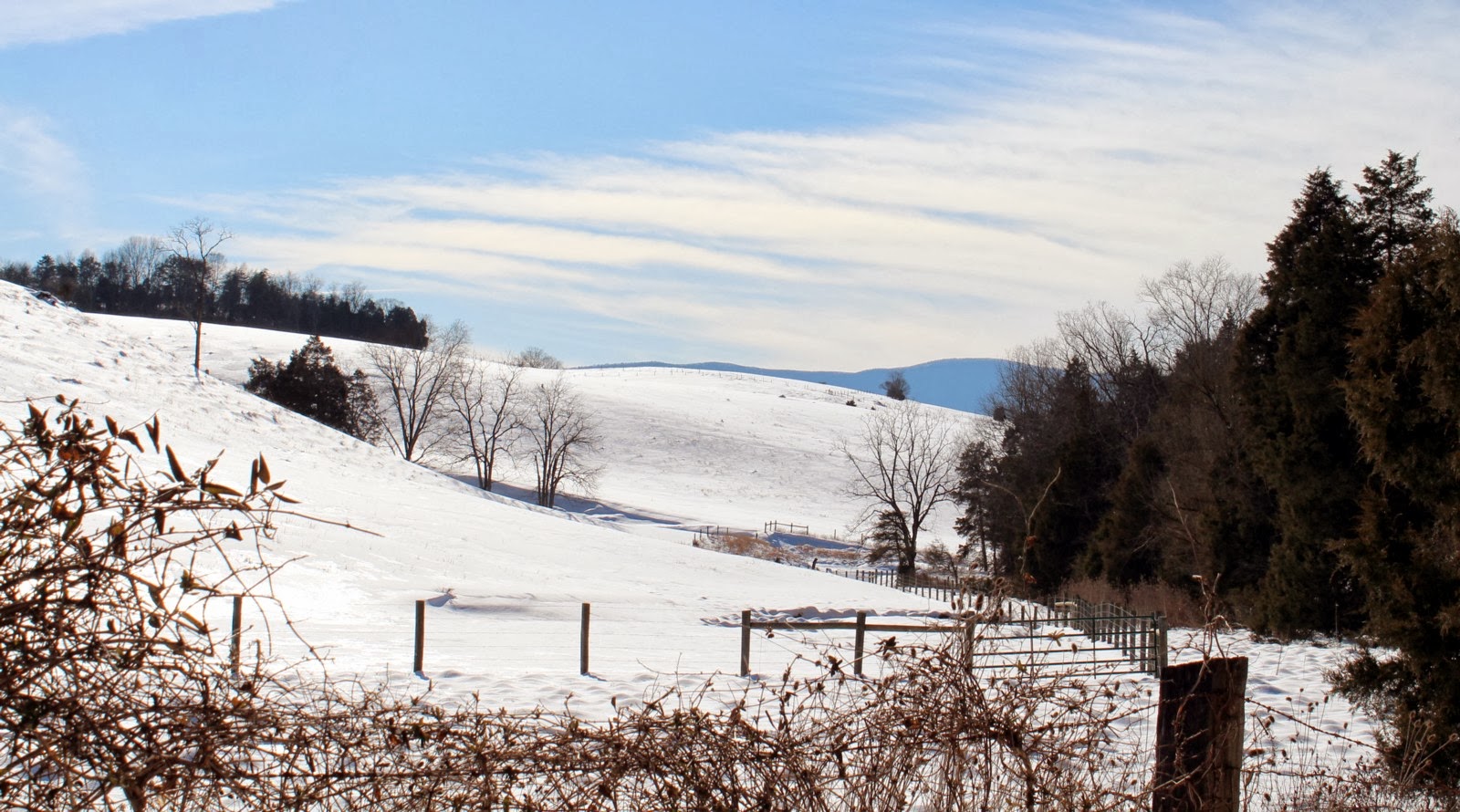 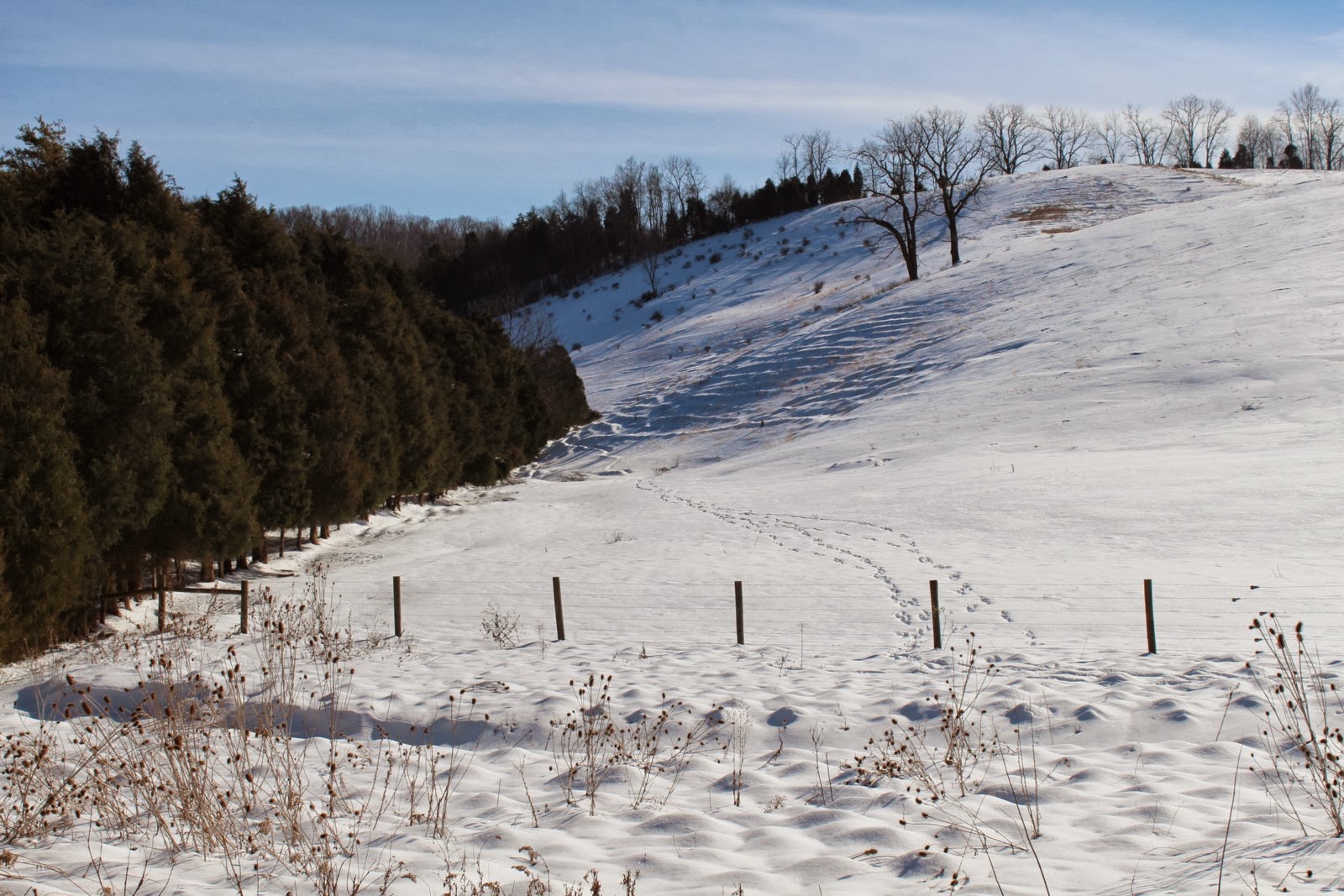 At the bottom of the driveway, I shot a couple of photos of the pasture across the road. 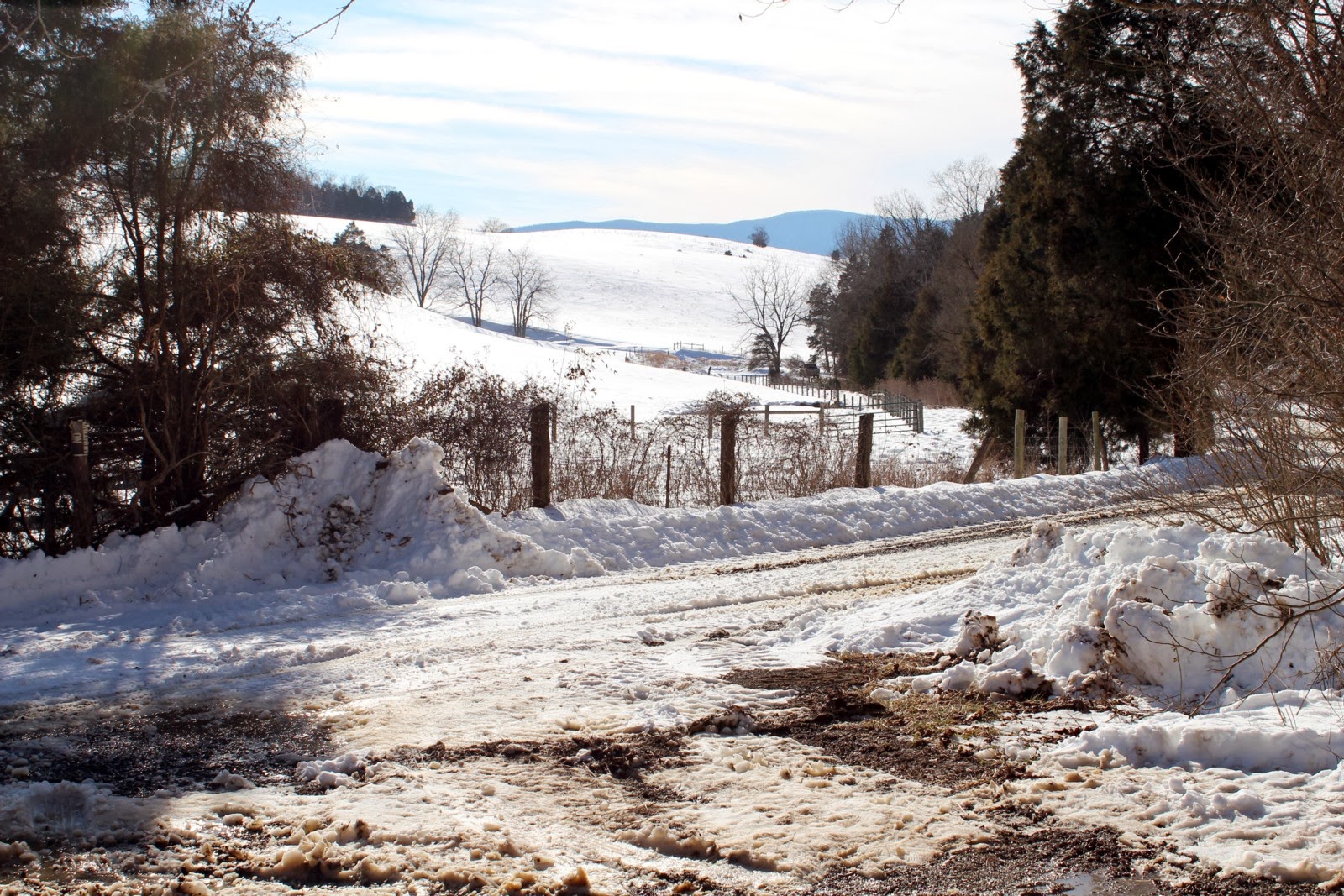 I was fortunate to see my neighbor who was  driving by on his tractor.  He offered to plow our driveway and I was so grateful I gave him a pint of honey.   Farmers make the best neighbors!  Now, I can get my Mariner up and down the driveway (I don't think I could have with just the tracks since the middle part was too high). 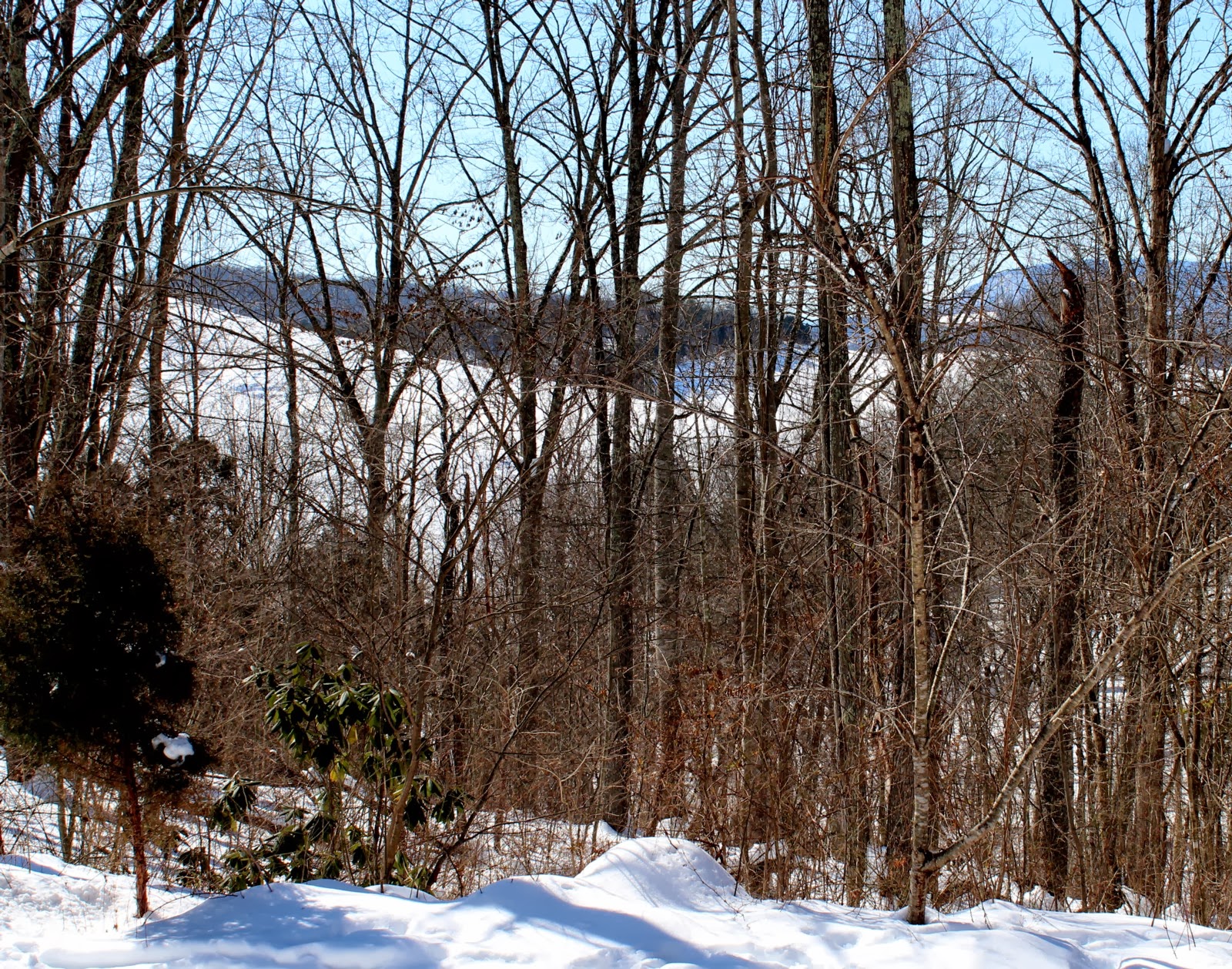 This view from the front porch is one I want to remember about this Valentine's Day. 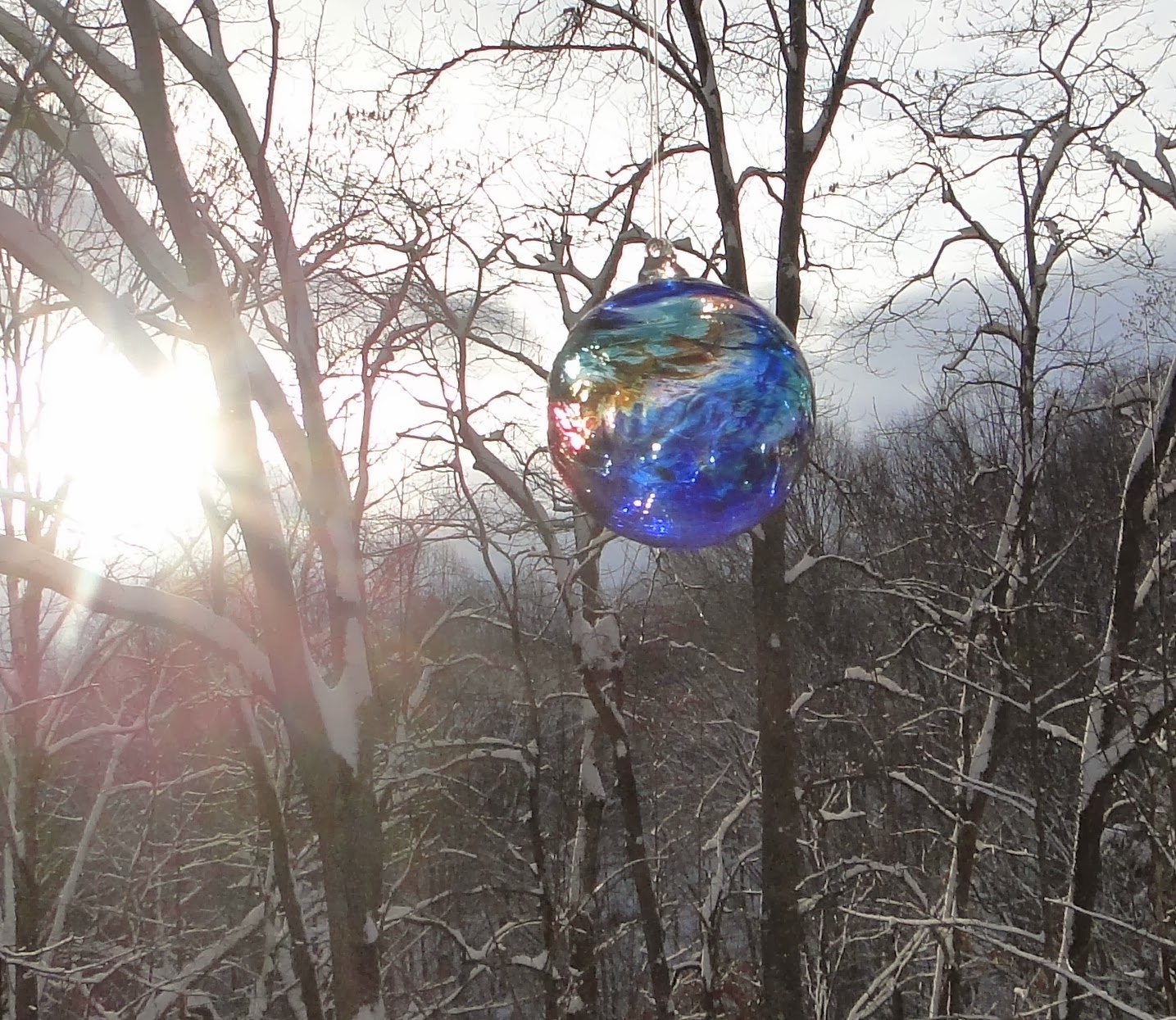 Another photo for the memories....

The temperature is supposed to be in the 50s  starting tomorrow.  Hopefully, the snow will not melt too fast so that the creeks flood.
Posted by Appalachian Lady at 12:36 PM 5 comments: 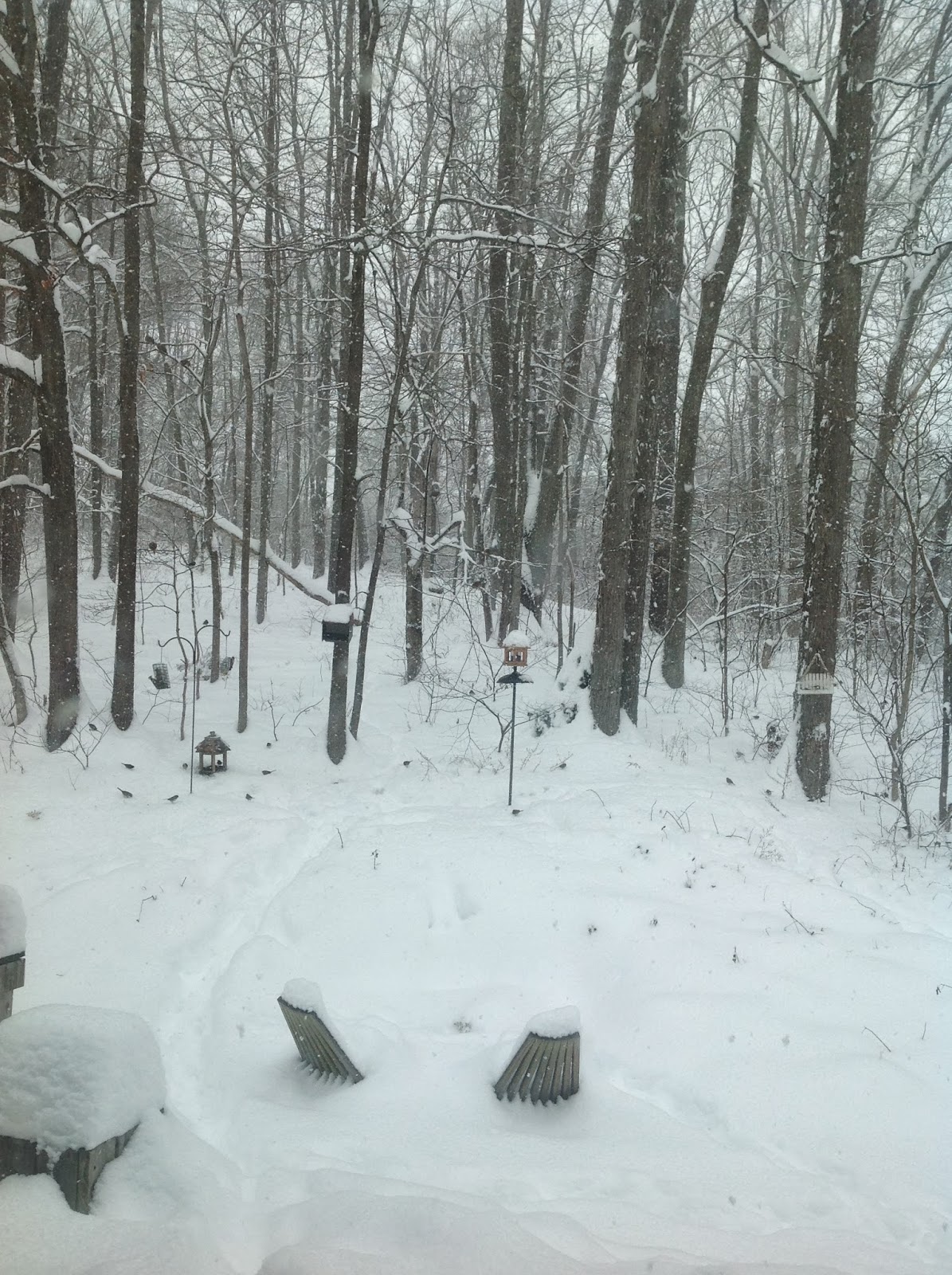 This is the view out my kitchen window at 3:30.  I have been kept busy keeping the bird feeders full.  The squirrels must be in their nests; I have not seen them all day.   The snow is supposed to stop by 5:00.  Then, the winds will pick up.   We are well prepared if we lose power but I hope it does not happen. 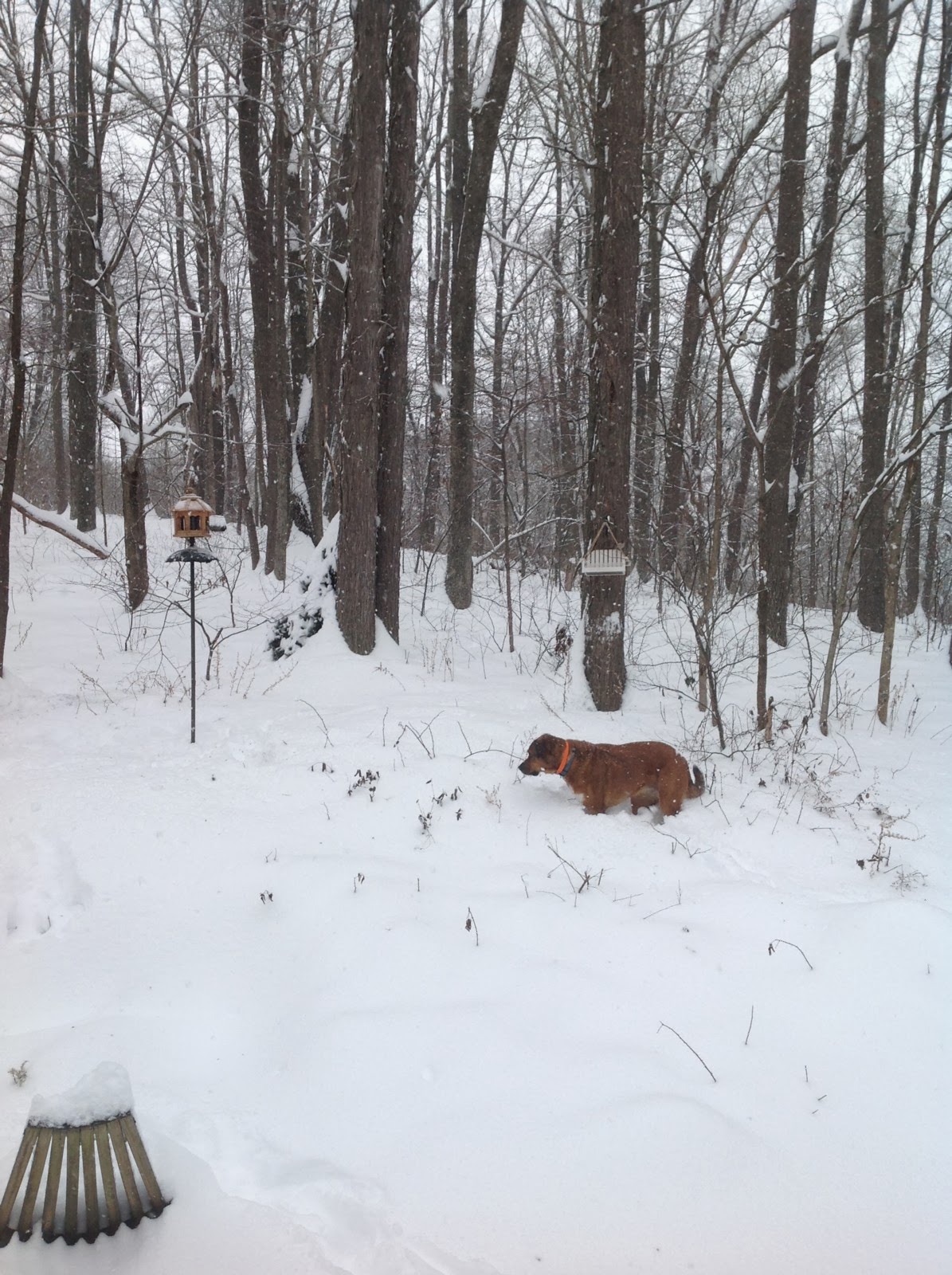 This was the view this morning when we only had 12 inches.  It was more fun then for both Kookie and me.   We will not be getting out for another day or two.  Happy Valentine's Day everyone.

The weather forecasters seem pretty certain this time we are getting a big snowstorm tomorrow.  So, before I rush out to get groceries like everyone else, I thought I would post some more photos from this winter. 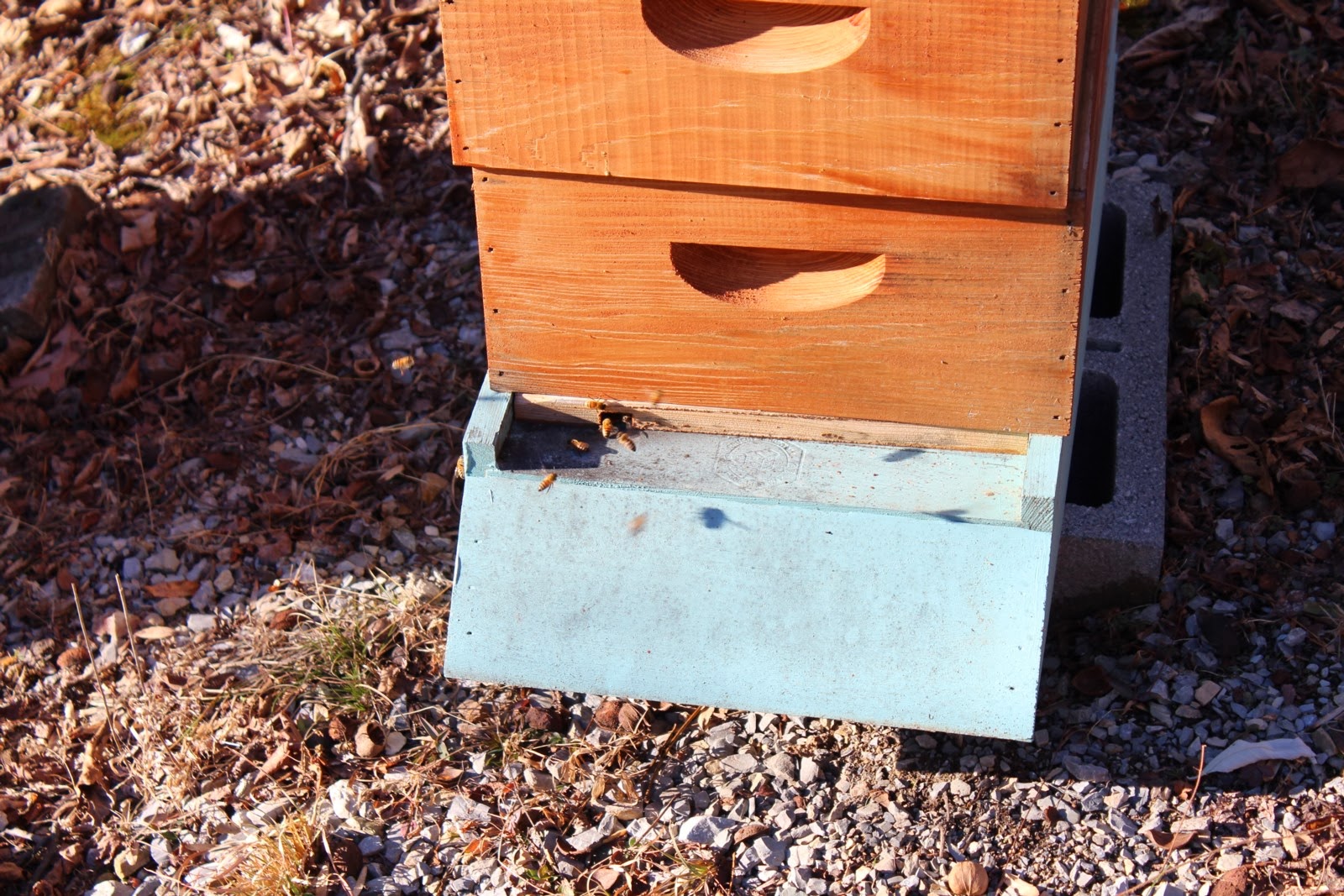 I was worried about my bees during the extreme cold spells.  Luckily, each cold spell was followed by a few warm days so I saw that the bees were getting out.   Mostly they go to drink water, defecate and look for any pollen.  I did not see them bringing in pollen though---they probably wish they were in Florida. 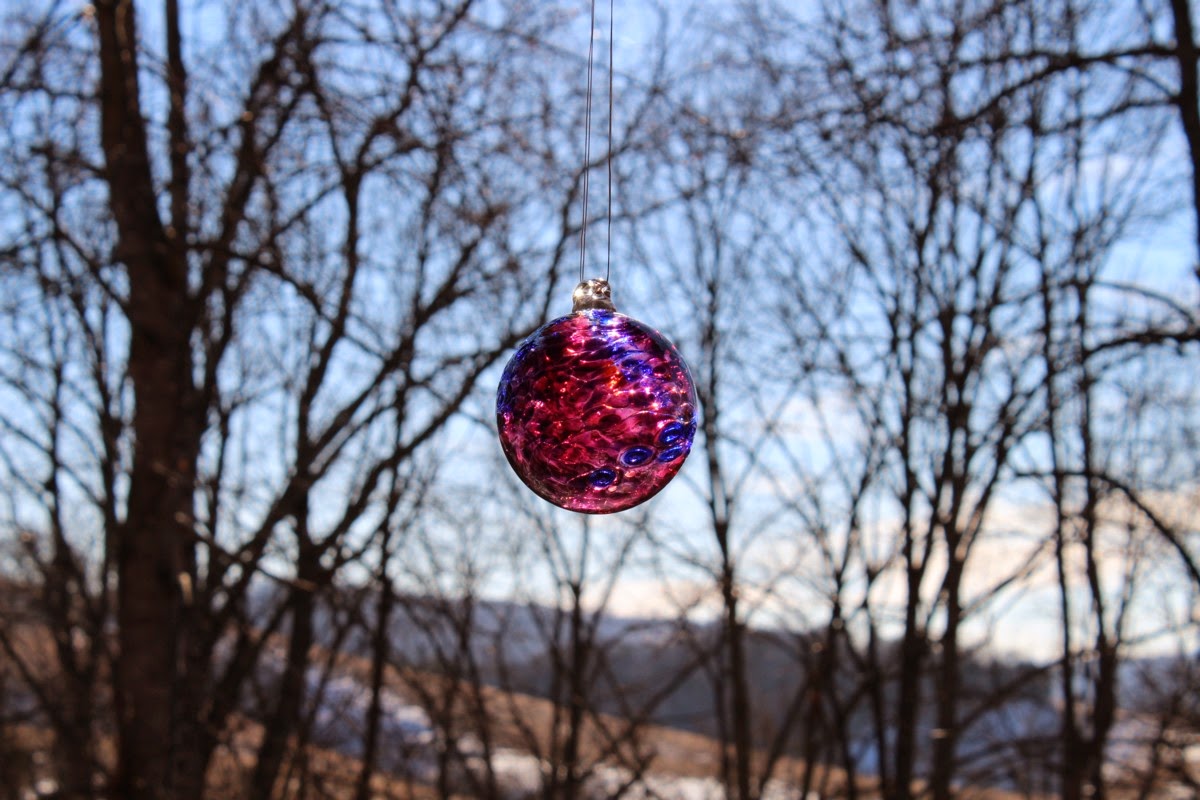 I made another suncatcher at the glassblowing studio.  I absolutely love doing this, especially on a cold day when the furnace is 2100 degrees! 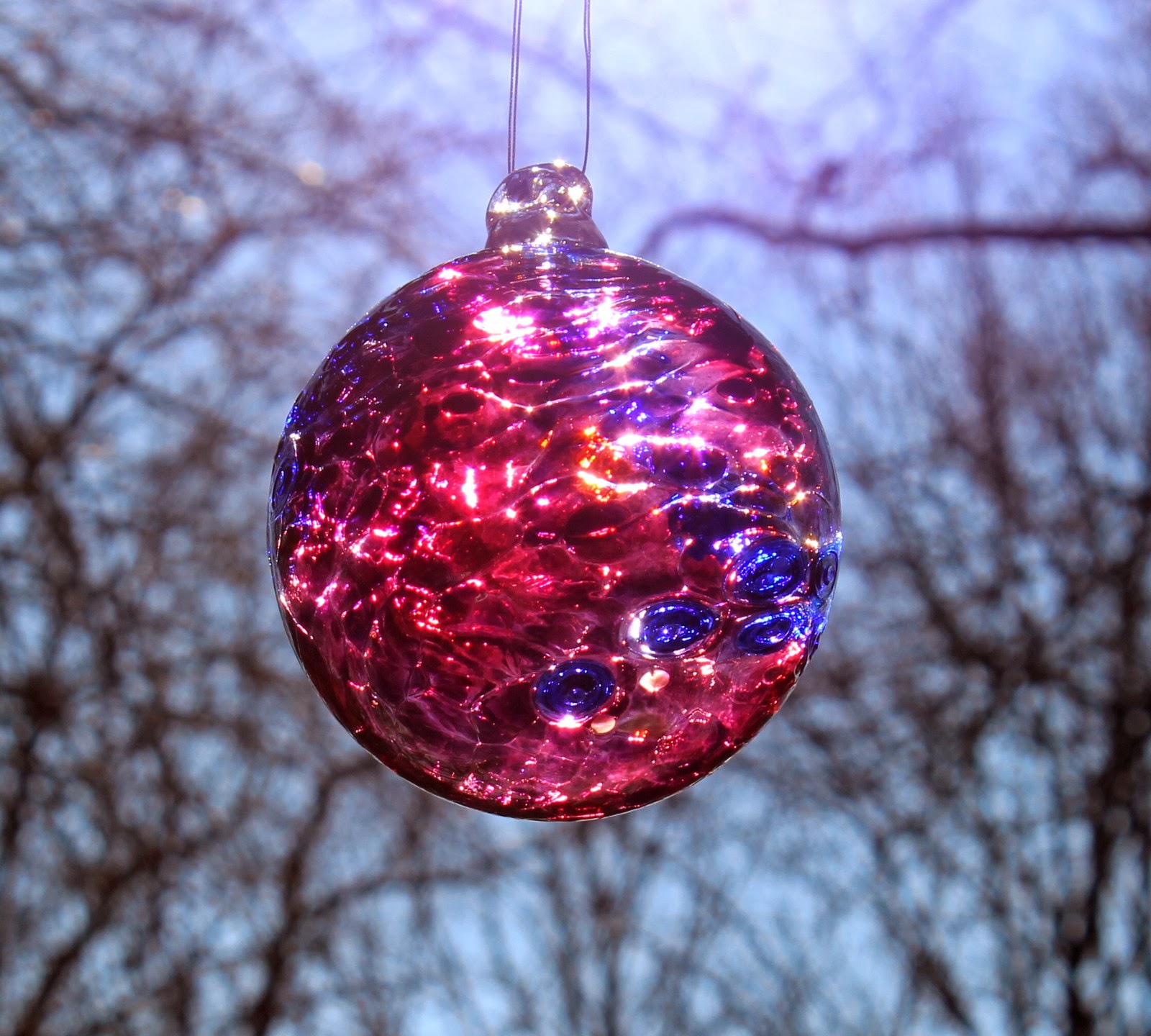 This closeup shows how it truly catches the sun.  I put something called meridi? which makes those blue and other spots within the glass. 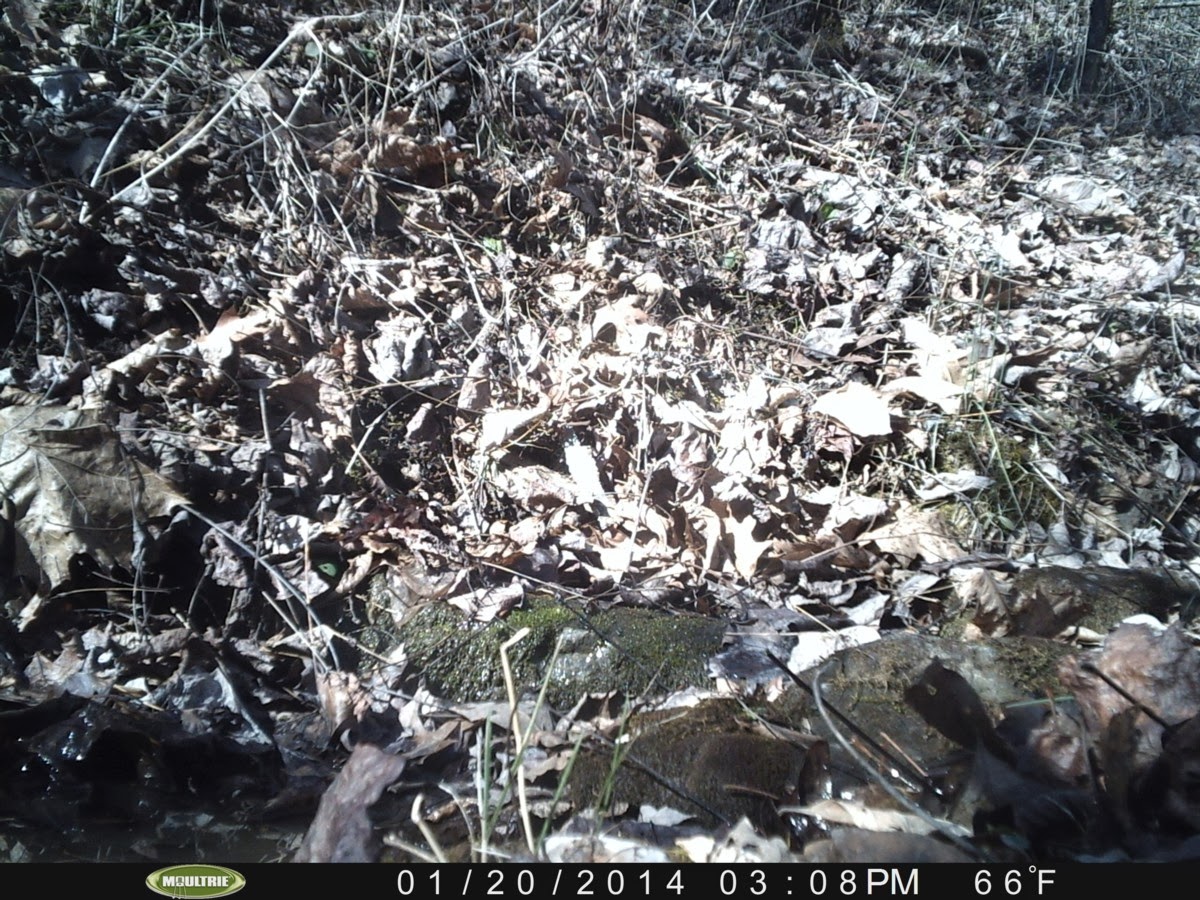 Here's proof of the warm temperatures.   On January 20, my wildlife camera recorded 66 degrees. 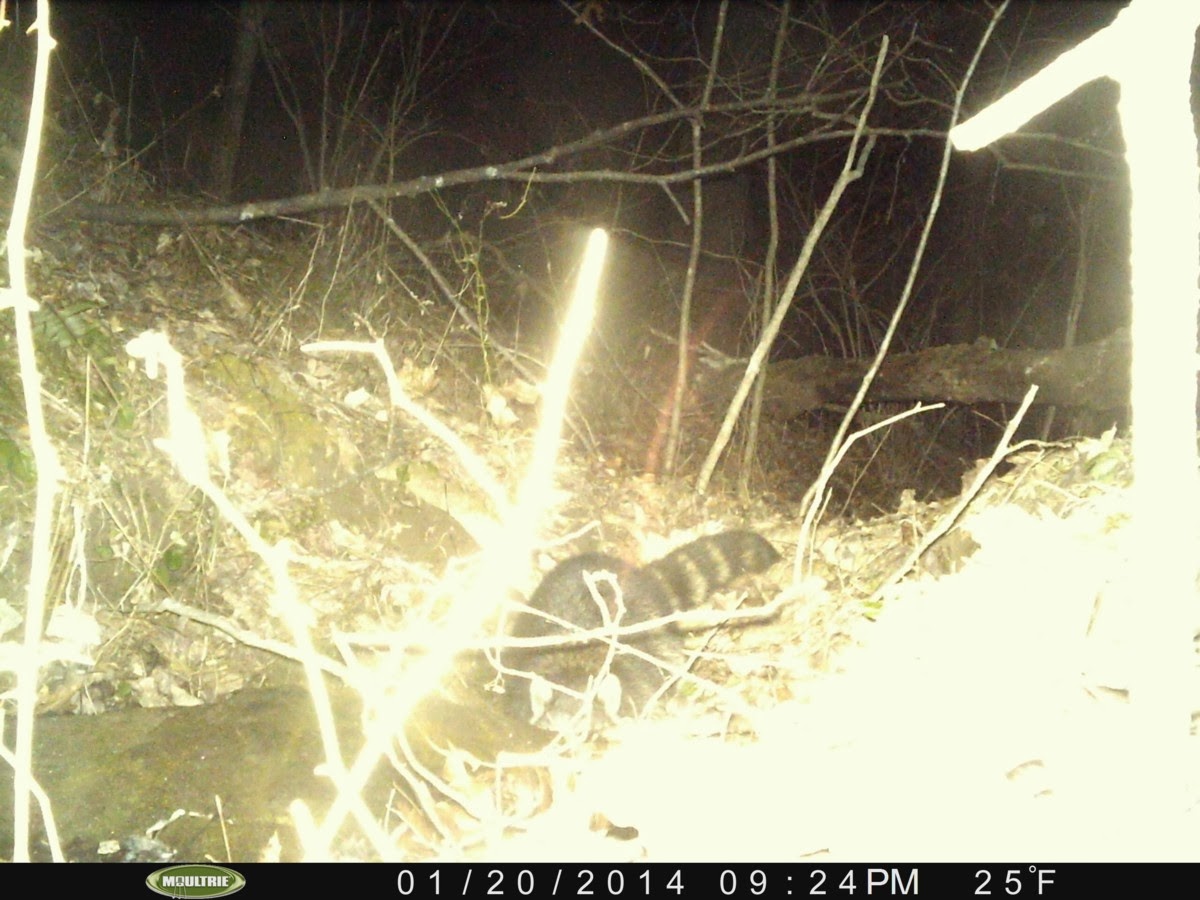 That evening, a raccoon came to the waterfall.  The temperature was 25 degrees, 41 degree drop. 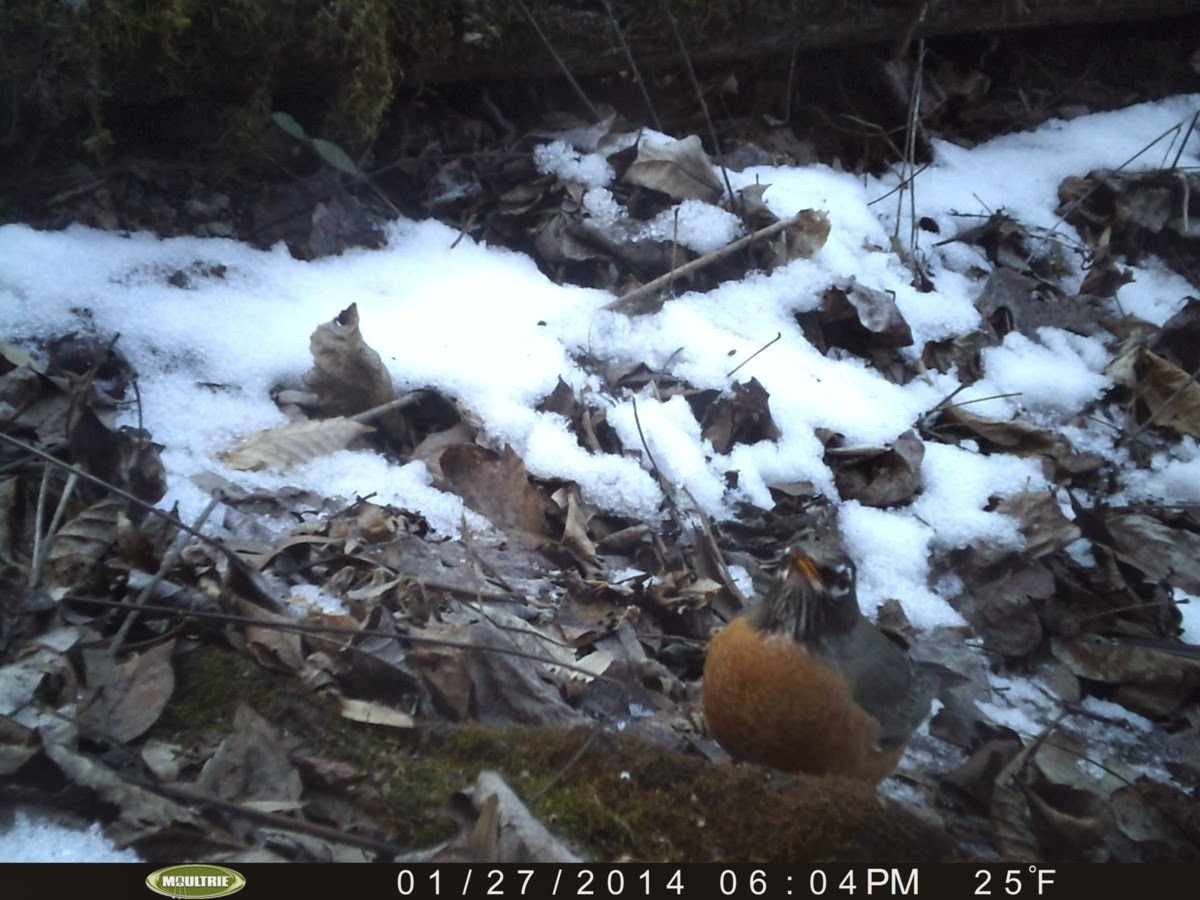 I moved the camera a little closer to the pool of water on top.  There I captured over 200 photos of American Robins.  Most people think of them as a sign of spring but they stay all winter here in large flocks. 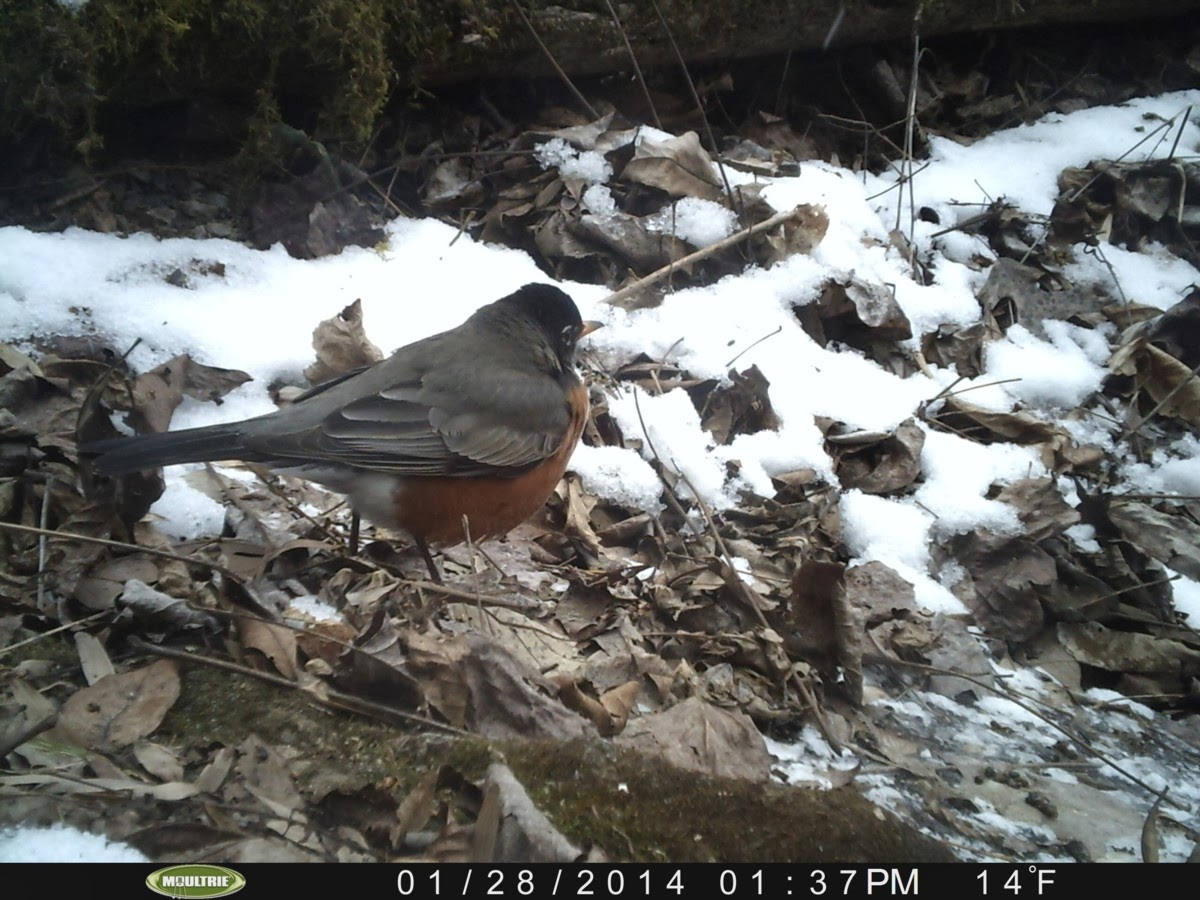 The robins came even on cold days such as this 14 degrees on January 28.

It's a beautiful sunny day with 37 degrees at noon.  It is hard to believe we will have a big snow storm tomorrow.