Fall Progression and Last of the Butterflies 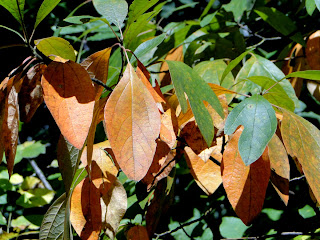 Leaves of the dogwood, sassafras and sourwood trees turn red and orange in mid-September. These are followed in early October by the poplars 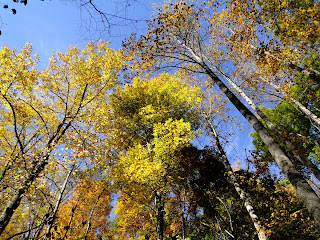 The poplar and hickory trees are brilliant yellow for a day or two in early October. The poplars drop their leaves quickly, filling the ground with bright yellow leaves. The Hickories, on the other hand, stay on the tree and turn brown. 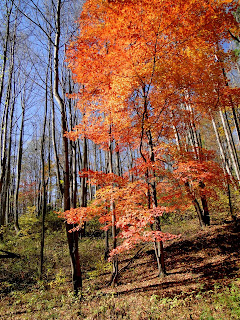 With the leaves off the tall poplars, the sugar maple can show off its glorious orange colors. 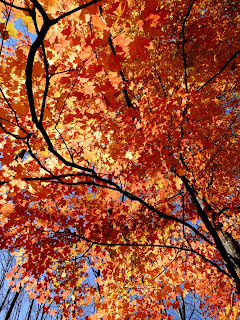 The color seems brighter this year, maybe because we had some cold nights in early October. 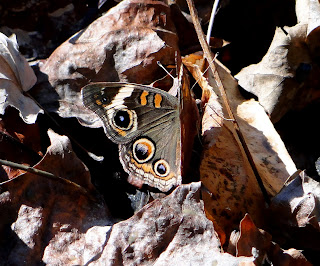 I still see buckeyes in our fields, flying a little faster when it's cooler. 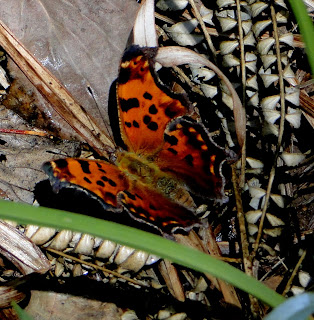 The anglewings along with mourning cloaks overwinter as adults so they are often the first butterflies I see in March. The anglewing are abundant, although usually solitary, in our driveway in September and October.
Posted by Appalachian Lady at 9:19 AM 16 comments:

I made a new banner for header of my blog--it's a photo taken at the top of the road we live on down the valley to Walker Mountain. The photo reflects the countryside, pasture land surrounded by forests and mountains.

This was another banner photo I considered--a view of New River.

Most people know I am a big Virginia Tech football fan. My husband is also a big time Best Buy customer. So, it was a nice surprise when the store manager called to say he had won a raffle for two tickets to the game and tailgate Saturday. My husband could not go but I went anyway. The seats were great but more exciting was that my name was drawn in a raffle done at the tailgate to be on the sideline. I would be there with the Best Buy store manager, the ISP guy who arranged it and another Best Buy customer.

It was so exciting to be near the action. The guy from ISP said we should be alert in case the play went close to where we were standing. Sure enough, I saw quarterback Tyrod Taylor head our way as he was being chased out of bounds. I backed up quickly and had to step aside against the wall to keep from getting hit. 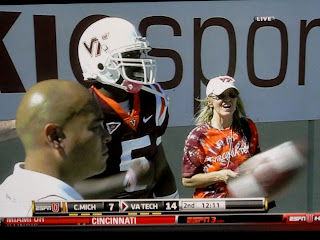 The television camera covered Tyrod coming back onto the field, tossing the football to the official, with me right behind him. (my photo of ESPNU broadcast). Here I am in my tie-dye shirt. I replayed the game broadcast today, savoring in the moment!
Posted by Appalachian Lady at 3:19 PM 8 comments:

For a couple weeks, we have had large flocks of black birds migrating through. The other day a flock of grackles were in the yard, sounding like a flock of chickens. It's bird migration time. The following photos were taken on September 26. 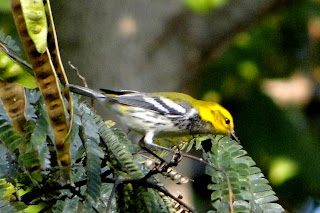 This Black-Throated Green Warbler was on our mimosa tree. He flew around so fast, it was hard to get the photo with my point-and-shoot camera. 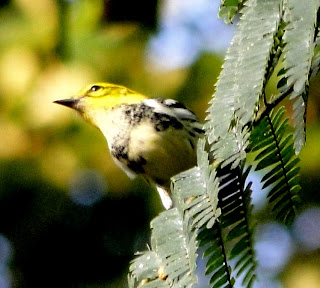 Here's another shot of him from below.

Now, I'm waiting to see my first white-throated sparrow and dark-eyed junco.
Posted by Appalachian Lady at 9:04 AM 5 comments: