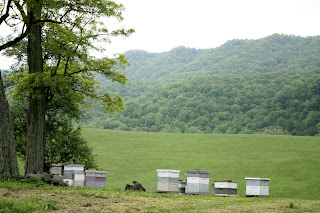 Almost two weeks ago I attended a great beekeeping workshop. Here is the apiary or cluster of hives we worked that day. Another group of hives are in those yonder mountains. 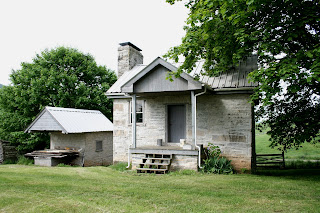 The workshop was held on an historic farm. This unoccupied building is the oldest and had been built in the late 18th century. The stone chimney on the left is for the huge stone fireplace inside on the first floor which was the dining/living area. Sturdy stairs went up to the open bedroom area or loft. In the basement, the hand-hewn timbers of the basement floor rafters were black with soot where there was another huge stone fireplace used for cooking. Before the workshop started, I enjoyed looking at all the old buildings, cemetery, and pastures. 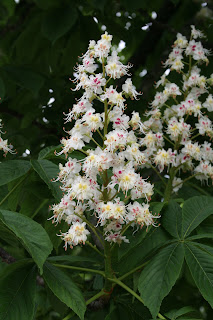 An Ohio Buckeye tree (not native to this area) was blooming in front of the Victorian farmhouse. The huge blossoms attracted a horde of honey bees. If you stood in the path of the direct line between the tree and the hives, bees would bump into you as they flew. Guess that explains the origin of the term, bee line! 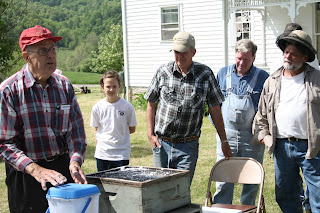 One experienced beekeeper said that he does the powdered sugar treatment about every 10 days. He says it does not hurt the bees because they just lick it off each other and may even eat a tracheal mite that way. This frequency of treatment is more often than I was told in my beekeeping class (once per month). They did say you should not use it on a package of bees for several weeks until the hive is well established.

After that demonstration, we divided into two groups, one beginner group to do hive inspections, the other more advanced group to learn about raising and marking queens. I stuck with the beginners.

I felt pretty good that I could easily identify the capped worker brood from the drone cells. Also, I understood when he said that one hive was not strong---very erratic queen laying and supercedure (queen) cells starting. Mr. C said he would probably requeen that one so that it would not swarm like another one did just yesterday.

The instructor was very quick with his inspections. He believed in getting a general sense about how the hive is doing, then getting out of the hive--no more than 15 minutes per hive. But, he inspects about every 10 days--more often than some beekeepers would do.

The bees were upset because some people were blocking their entrance. I got stung on my hand (I did not have my gloves on so I could take a few photos). The woman next to me handed me a penny to rub on my skin which seemed to get rid of the stinging pain immediately. 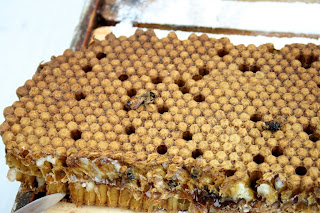 We inspected this frame of capped drone brood which works as a varroa mite trap. To make the trap, Mr. C nailed a little strip of wood about 1/3 of the way down the deep frame. The top 1/3 was filled with foundation. The bottom 2/3s was empty which encourages the bees to build drone cells. Mites are attracted most to drone cells.

Some people used their pen knives (I should carry one around like men do!) to dig at the drone larvae to look for the mites. They did not find very many which indicated to the beekeepers that the powdered treatment was working well enough to keep the mite population in check. 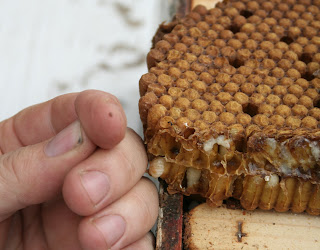 See the mite on the end of his finger(much better photo in the Backyard Beekeeper book, p. 86)? It looks like a freshly ground pepper flake but it's brown, not black. When you nudge the mite with a pointed stick or match, it will move and then you can see its tiny legs scrambling like a crab which it resembles a little.

After we poked around in that juicy larvae for awhile, we had lunch--sandwiches and great pecan pie (that Mrs. C made). I brought chocolate chip cookies which were eaten right away.

The workshop continued after lunch with splitting one hive to make two. I was surprised how easy it is to do. Mr. C. just took one hive box and set it aside. He determined which one had the queen so he took one frame of cells which had fresh eggs in it from the queened hive box and then put it in the other hive so the workers could make their own queen. The workers make a queen by making supercedure cells over the egg, then they put royal jelly in to make the queen. Of course, you will need another hive top and screened bottom board to put on the split hive.

A few days later, I used the powdered sugar treatment on my bees. I put my plastic mite grid underneath half of the bottom screen board and took it out the next morning. I found about 12 mites and 1 hive beetle. I am not sure what this means but will do the treatment again every 10 days since I noticed it does not hurt the bees at all--just like the instructor said.

Incidentally, Mr. C. made his own grids to put under the hives to check for mites or hive beetles. He makes them out of old political signs (the ones with corrugated plastic)--a very resourceful man. He also made an inspection cloth out of vinyl table cloth with a strip of wood at the end for rolling it back. I thought it looked like an old vinyl window shade so if I had one, I could make it too. But, I just use a flour sack dish cloth which works good enough.

I plan to attend the workshop next year, especially if they have it at this wonderful farm.
Posted by Appalachian Lady at 11:34 AM 13 comments: 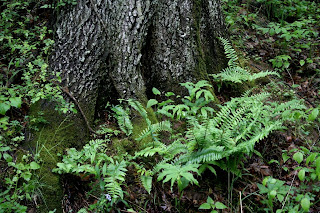 The base of this oak tree in our woods is always covered with Christmas ferns and moss. After several rainy days, it's perfect. 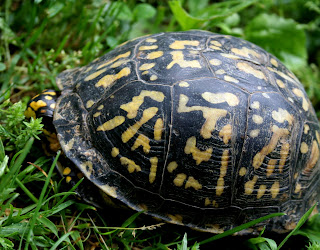 The rains also bring out the box turtles. This one was trying to cross the road so my husband brought him up on our land where he stayed for awhile, then went back down to the road again. 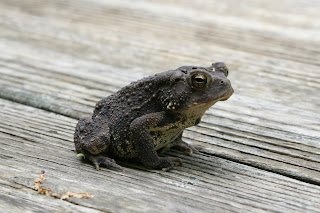 Another common sight after any rain is the toad, like this one on our deck. 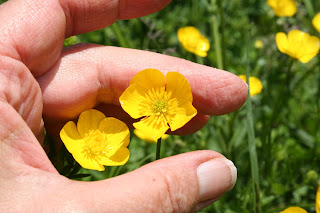 Our yard was covered with Buttercups. I hesitated to mow but finally broke down and mowed for the first time in early May. After one day, the buttercups popped up again, just shorter. I also let the dandelions grow since I noticed my honey bees like to work them. 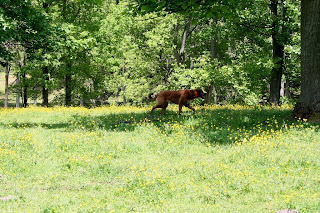 Here, my dog Kookie (all 86 pounds of her) runs through the back pasture which was covered with buttercups up until this week. 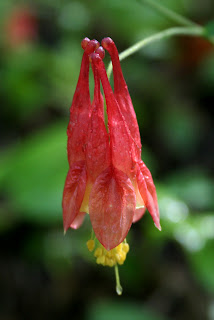 This Columbine was also blooming in early May although this wildflower prefers rocky, dry soils unlike the buttercup which likes moist soil. 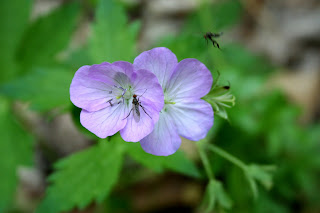 May is not complete without a photo of the Wild Geranium, here with a pollinating fly or bee and another getting ready to land. 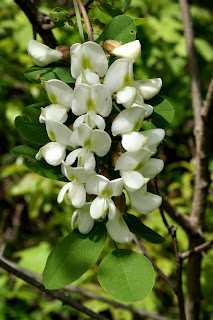 I have been looking forward to seeing the Black Locust tree bloom this year because beekeepers said that honey bees feed on the nectar. I did not see any honey bees on this tree even though it is only about 10 feet from my hive. The smell of the blossoms is so sweet I don't see how my bees could miss it. Perhaps they went to larger trees which were also covered with blossoms. However, other pollinators were abundant including bumble, carpenter and several other types of bees along with butterflies. Ants and beetles were roaming the twigs and leaves, making for a very active tree.
Posted by Appalachian Lady at 8:10 PM 12 comments: 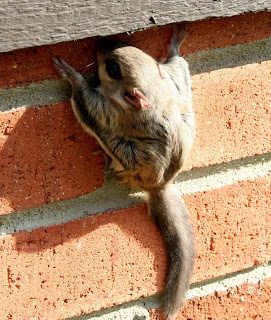 This Flying Squirrel was clinging to the brick foundation of our house one morning. Perhaps he was chilly. 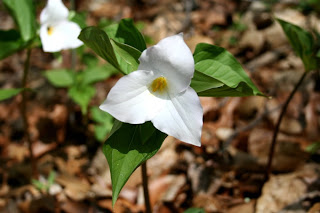 That same day, I made my annual walk up to a hard-to-get-to cove that has trillium covering the slopes. I think I will call it Trillium Cove because it is the only place that trillium grows on our land. 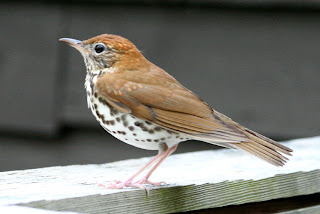 On another early morning, this Wood Thrush was sitting on our deck. I had time to get the camera and get this shot. I was a little worried she was sick. Then, another wood thrush called from nearby tree and the bird left to join him in the woods. Guess she was ok, perhaps a little chilly.

The hot weather last week brought all the leaves out. The dogwoods have been as full and beautiful as I have ever seen them, same with the redbud. But, alas, I didn't get a good shot of them. Spring happens so fast in Appalachia.
Posted by Appalachian Lady at 10:24 AM 12 comments: