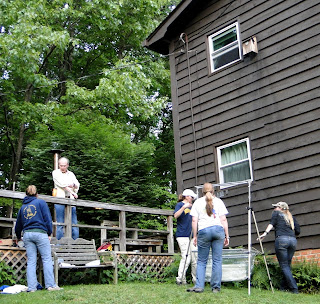 On May 17, Radford University biology professor Karen Francl, her graduate students, and Jane Rodrigue banded the big brown bats that reside on the side of our house.  That bat house has been on our house about 20 years and has bats every year except when white nose nosema was first detected in a local cave (the first incidence in Virginia).  It was vacant for two years and then occupied by the big brown bats.  Perhaps, it had little brown bats before because they have suffered the most from nosema (95% mortality) while big brown bats are mostly unaffected.

I took a few photos which the researchers are welcome to use for their presentations.  I found the close ups of the bats fascinating.    The colony is maternal with at least one baby bat which they called a pup.  I think there are several more now as I hear them in the bat house while the mothers are out foraging and drinking water at night.  The researchers plan to come back in July to measure and count the population again. They counted 15 but at least one went back up into the house. 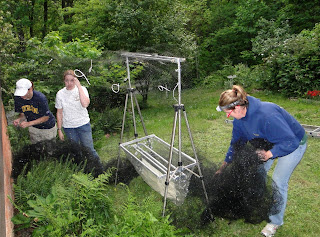 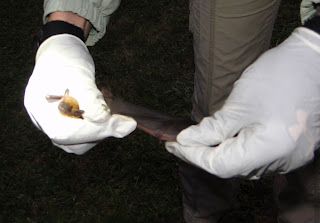 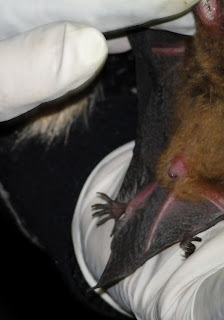 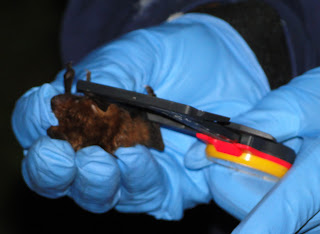 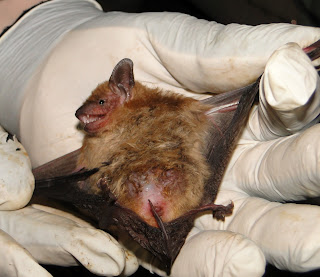 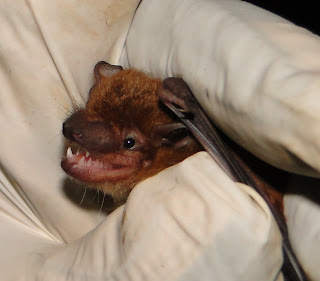 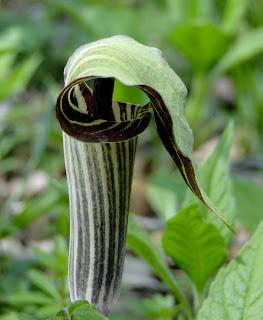 On April 14, I went on a Wildflower Walk with the Virginia Master Naturalists and the Roanoke Native Plant Society at the Bland Nature Preserve.   Located in Montgomery County and only 5 miles from Blacksburg, the preserve is owned by the Nature Conservancy and is not open to the public so this was a special treat.   The trail is along Mill Creek and contains several waterfalls (so intrigued with the flowers I didn't take photos!) along with loads of trillium and other native wildflowers.

The Jack-in-the-Pulpit was huge--biggest one I have seen.  I haven't spotted any this year on my land as they seem to pop up in different places every year. 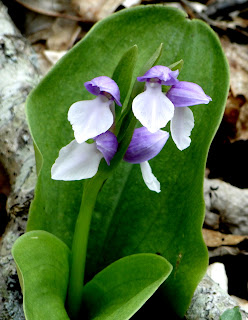 The Showy Orchis also was larger than what I have on my land.  Will mine be that large in a few years or is the habitat just different?

What I liked the most about the walk was seeing some new species--green violet, etc.


Back at Home
At home, I ventured into my cove which has steep slopes containing trillium and the native orchis too.  As I was pulling up the invasive multi-flora rose (really bad this year), I noticed we too have the green violet but only in the cove as far as I can see. 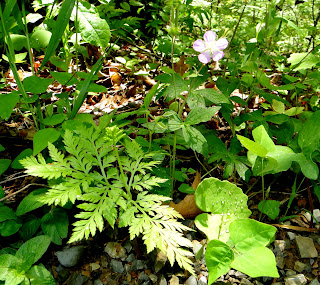 I found the Rattle Snake fern everywhere in the woods.  You can see it in the lower left of the photo.   I always thought it must be a plant in the parsley family but the central stem never bloomed.  Now I know why--those are the spores, not buds. 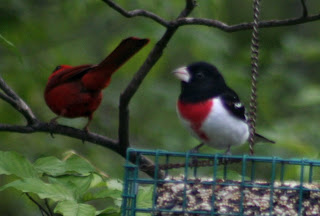 I put up a large cake feeder on April 27 and immediately a Rose-Breasted Grosbeak came to feed.  He was here only one day and left.  Also, a pair of Indigo Buntings left quickly after feeding on the ground.  They never stick around but I enjoy their colorful visits.

This photo illustrates the difference in the red color of the two birds.  The Northern Cardinal has a little more orange in the red while the Rose-Breasted Grosbeak is a truer red.  It almost looks like there is blood on his chest. 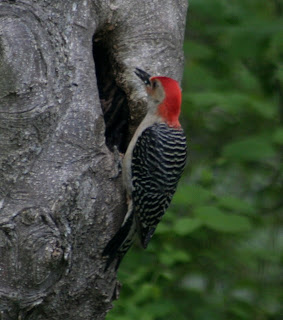 This Red-Bellied Woodpecker was looking for insects in the Mimosa tree which is near the feeder.