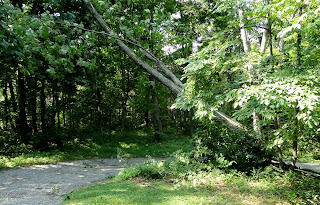 Our power went out on June 29 due to the historic derecho storm.  I remember I got an alert on my iPad about 15 minutes before that a severe thunderstorm was going to hit.  I didn't think much about it but when the wind started to pick up, I knew this was really different.  The trees swayed back and forth more than I had ever seen.  We stood on the bottom deck and heard a crack and saw the hickory fall and lean over the driveway.  The photo above was taken several days later.  I went into the basement because I thought it was a tornado or something worse. 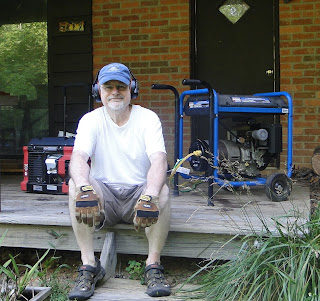 My husband had two generators going--a smaller one for the refrigerator, TV, computers, and lights and a larger one for the water pump and hot water heater.   The first night we ran the small generator while we slept.  That was a mistake since it must have overloaded because the extension cord melted!  After that, we didn't run any at night and enjoyed the peace and quiet.   We would put the freezer stuff in a cooler packed with ice and put frozen water bottles in the fridge to keep the other food cold.  So, we didn't lose too much food.

I cooked on a camp stove outside enjoying the sounds of wood thrushes. On July 4, I made blackberry syrup on the camp stove instead of my usual cobbler.   All in all, we didn't fare too badly.

Our power was restored last Saturday, July 7.  Many in our county didn't have their power restored until days later so we felt somewhat fortunate. 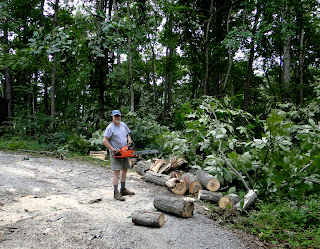 On Wednesday, we had a guy cut the hickory tree down and then saw the lower part into logs for the woodstove.  Steve chainsawed the upper part and we stacked up the logs to dry for about a year. He also cut up a black cherry tree back up on the land so at least we will get a lot of firewood out of the storm.

My husband also went over to  the Amish community to buy his granola he likes there.   The Amish were not affected by the power outage because they don't hook up to the power grid.   They use generators, gas, wind and solar and are quite independent.   We could learn a thing or two from them. 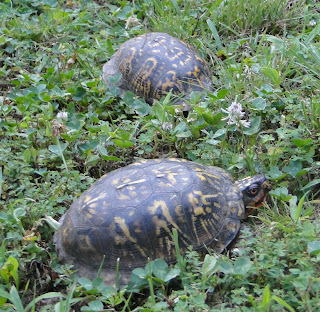 These box turtles did not seem to mind the power outage either.  I saw three in the yard last week which was a little unusual.

This is an experience we won't forget any time soon.
Posted by Appalachian Lady at 11:34 AM 9 comments: