Whitetop Mountain: Morels and Eleanor Roosevelt at the Naturalist Rally 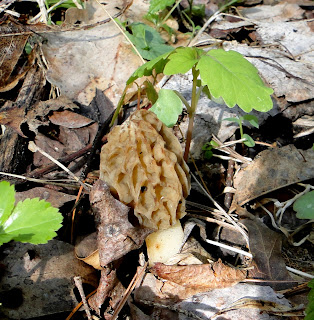 There it is--a morel mushroom! But I didn't find it. I was on a mushroom field trip led by Becky Rader at the Mount Rogers Naturalist Rally last weekend. The group found 7 morels--me nary a one. The morel season is gone by the end of April on my land but we found them on Whitetop Mountain (exact location I will not tell) because it is at high elevation. Becky gave me a good rule, "By the time Mayapples bloom, morels are gone." 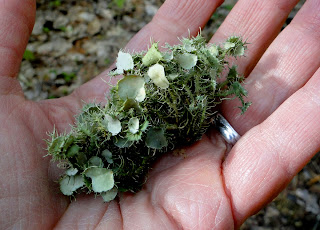 I did find this lovely lichen. I couldn't find find what it is by searching online--does anyone have a clue? 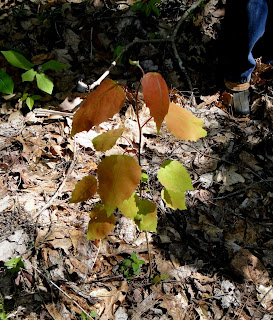 I always think of aspens as a western tree, growing in large groves at high elevations in the Rockies. That's the quaking aspen but here in Virginia, we have the bigtooth aspen. The range map for this aspen shows an extensive area in the northeastern United States. Rather than seedlings, this tree reproduces mostly by sprouting by roots, colonizing disturbed areas, no doubt how this little tree ended up at the edge of the trail. We looked around and found a large tree about 25 feet away, only beginning to leaf out. The catkins and leaf buds are eaten by ruffed grouse while the rest of the tree is eaten by deer and beavers. 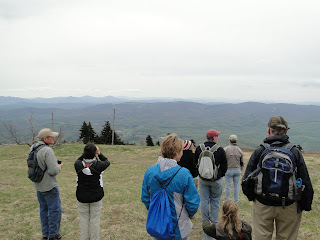 Whitetop Mountain is the second highest peak in Virginia behind Mount Rogers which is 5,729 ft. elevation. In the photo above, you should see Grandfather Mountain in North Carolina. As we learned from Doug Ogle's speech on Friday night, Whitetop might have been higher than Mount Rogers at one time but it has been so developed over the years. Whitetop Mountiain is shown on the first surveyor's maps while Mt. Rogers was missing. I was most intrigued, though, when Doug talked about the great connection between Eleanor Roosevelt and Whitetop Mountain.

Eleanor Roosevelt was born and raised in New York. Her father, Elliott, was committed for alcoholism to a sanitorium near Abingdon, Virginia. Doug said that was a big mistake as the area is known for producing hard apple cider and moonshine. As a child, Eleanor visited her dad where he took her on horseback rides around the Whitetop Mountain area. Elliot died when Eleanor was only 10 but she attended the annual bluegrass music festival on Whitetop during the 1930s while she was first lady. Doug showed photos from newspaper articles about the festival, one with Eleanor Roosevelt next to the musicians. The festival was very popular with 16,000 cars parked at $1 a car (a huge sum during the Great Depression).

Note that this information was not found on the First Ladies Library website but only from Doug's speech and the wikipedia entry. 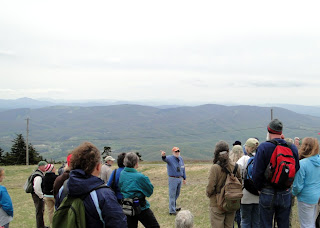 The telephone lines are in the process of being buried--a big improvement! 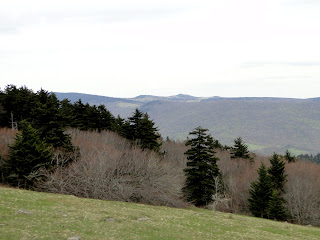 Mount Rogers from Whitetop Mountain
May 7 , 2007

This view of Mount Rogers is from the lower parking lot on Whitetop. The red spruce were in bloom which sent my allergies in high gear at this point. This was only my second trip to Whitetop (my first in 1981) because, like many, I visit Mount Rogers to see the rhododendron bloom in early June. If I do it again this year, I will be sure to stop by Whitetop on the way.

If you are planning on camping around here, note that the nearby Grindstone campground is closed indefinitely due to the tornado that hit it on April 27--the same system that hit Alabama so bad.
Posted by Appalachian Lady at 11:08 AM