About 5 inches of snow fell since early this morning resulting in a mad rush of birds to the feeders.

This female Northern Cardinal, two male Purple finches, and a male American Goldfinch wait patiently for their turn at the feeder. 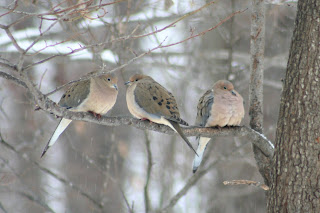 These Mourning Doves are not waiting for the feeder since they feed on the ground. I guess they are just trying to keep warm. 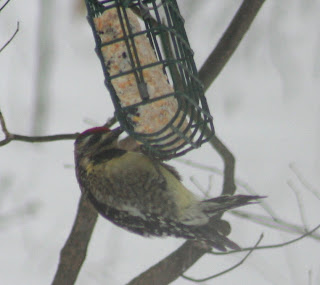 This is the best photograph I could get of the Yellow-Bellied Sapsucker feeding on suet. He has been around for the last month. He will not eat sunflower seeds so I am trying to keep the suet there all the time.

Chris--here are my 7 random facts about me. I don't have anybody to tag since I think everyone's blog I read has been tagged. This might be more than you wanted to know...

Posted by Appalachian Lady at 1:56 PM