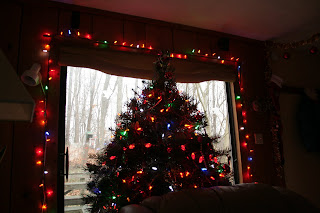 I can't bear to take my Christmas year down yet. I replaced all the mini and pepper lights with L.E.D lights this year. Last year, I used the LEDs outside and was so impressed I scooped up the remaining ones at Home Depot at half price after Christmas. No more incandescents--I figured I am only using about 42 watts (per hour) for the 8 strings of lights versus 360-420 watts for the mini incandescents I had before. What's more, I gave my husband not one but two LED flashlights and lanterns this year. With replacing all the other incandescents this year with compact fluorescents, I figure we are saving some on electricity. It's more than made up for by computers and televisions but still.... 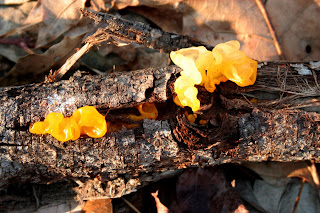 Before the severe cold spell (it's only 21 degrees at 5:00), I took a walk and found this fresh mushroom (Witches Butter?) on a log. Picture was taken on December 30.

I've been busy with travel to Belize over the holidays. If you would like to see some of my pictures from this beautiful country, check out these photos on Flickr:
http://www.flickr.com/photos/22258048@N02/
Posted by Appalachian Lady at 4:44 PM