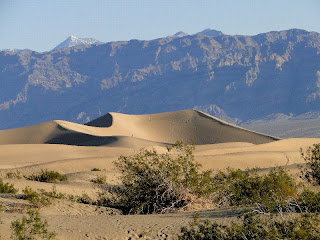 On our second day in Death Valley, we got up early enough to visit the sand dunes which enabled me to photograph with a low morning sun angle. 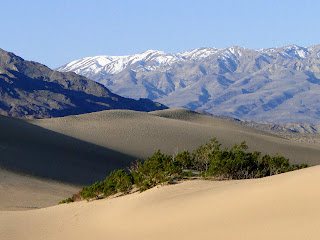 Those shrubs were blooming, amazing in such a forlorn place. 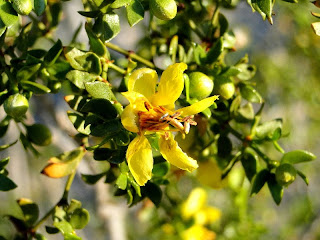 The flowers attracted wild bees. When you think of Death Valley, you don't think of much living there. 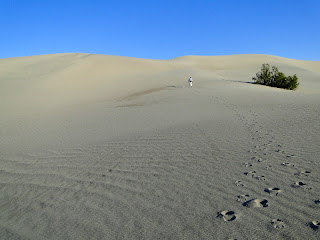 As always, my husband is way ahead of me on this walk. At first, I thought I didn't want to mess up the dunes with my footsteps but only a few hours later, the prints will be gone, covered up by the wind-blown sand. 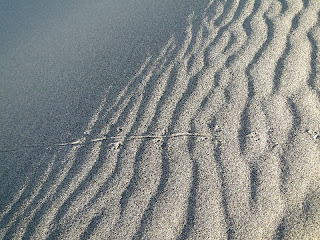 We saw the telltale tracks of a small lizard dragging his tail on the ground earlier in the morning. 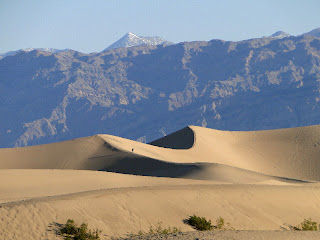 We did not walk as far as the guy in the center of this photo who cast a long shadow on the dunes because our next hike was waiting...

Mosaic Canyon is like walking through a geology museum but better. 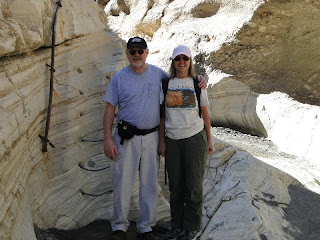 Here we are in a rare photo of us taken by a stranger. That's a layer of marble (metamorphic) in the bottom of the canyon. In the back, you can see the conglomerate (sedimentary) rock layer which was on top of the marble. Not shown but a layer of sandstone (sedimenary) rock was on top of that layer. 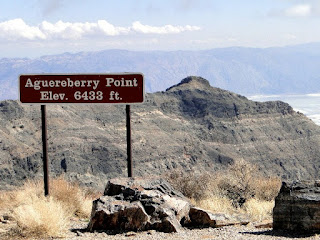 After that short walk up the canyon, we drove towards Panamints Springs on the western border of the park and drove south on Panamints Valley Road--where there was very little traffic. We then drove back into the Park on a rough road with almost no traffic. We then turned up a very rock road up to Aguereberry Point where the temperature had dropped from the 60 to 37 degrees because of the higher elevation (6433 ft.). 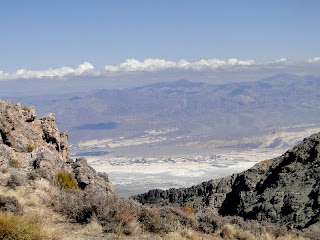 This view is from the opposite side of Death Valley as Dante's View but we were there by ourselves to enjoy it because of the rough road to get up there.

Click here for my last post on Salt Creek and our final day at Death Valley.
Posted by Appalachian Lady at 2:25 PM