The Birds, Bees and Honey 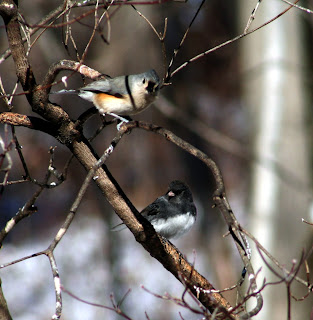 Snow has covered the ground for the past three weeks. But we have been lucky that the severe storms have missed us, going east, south and west. I guess that makes up for the past winter when our area was targeted with heavy snows.

The birds have flocked to the feeders so we have already bought 100 lbs. of black oil sunflower seeds this month. But, the sight of hundreds of birds at the feeders makes it worth it. 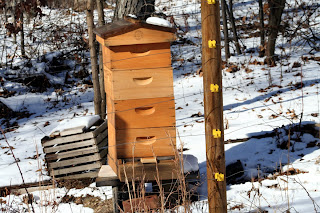 Bee Hive January 14, 2011
(yes it's sloping, I keep propping it up until spring when I can try to reset the concrete blocks)

So far so good with my bees this year. On Dec. 31, we had a warm 50 degree day. I noticed hundreds of bees swarming around the hive at 1:00. At first, I thought other bees were robbing the hive since I thought I saw bees kill other bees. Later, I went outside and only a few bees were outside. I noticed that each one was dealing with a dead bee. I watched one push a dead bee to the edge of the bottom board, then fly a little ways and drop to the ground with it. The bee then returned to the hive. There was a big pile of dead bees right where the bee dropped that dead one. The bees were cleaning out the hive of dead bees! The next morning, I noticed all the dead bees were gone, probably a yummy treat for the birds. That might have been the first warm day since the bees went into their winter cluster.

I also noticed a few bees out when the temperature reached 40 degrees yesterday. They didn't go far and appeared to be eating the melting snow. I hope they made their way back to the hive in the chilly weather. 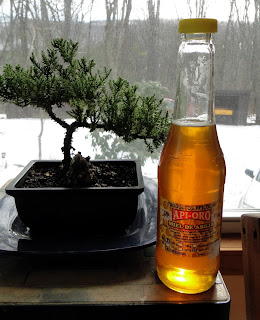 I bought some honey at a roadside fruit stand while we were in Costa Rica. It was a good thing it had bees on the label because the vendors could not speak English and my Spanish is poor. By the time we got back to the hotel, the bottle was leaking. So, I bought packing tape and sealed the bottle cap up good and put it in several ziplock bags. I hoped that the TSA wouldn't find it because it looked very suspicious (and I read an article once about a man getting detained for trying to bring back jars of honey on a plane flight).

The bottle made it back in my checked luggage . I was delighted that the honey was quite good. It reminded me a little of orange blossom honey but a little richer with tropical flavors. I am becoming knowledgeable of the different flavors of honey. Right now, I have several varieties of honey on my shelf--locust (my very own), sourwood (from my mentor), orange blossom (from the farmer's market), and now my Costa Rican honey.

I put my bottle of honey next to my little bonzai. It reminded me that last summer, the bees would sit under the bonzai, sipping the water from the damp soil. I know I took a photo but lost it when my desktop computer crashed last year.

I am already thinking about spring!
Posted by Appalachian Lady at 11:35 AM