Frost was on everything for the last two nights but the days have been warm (60 degrees). Today, it will be well above 70 degrees, prompting everything to grow fast.

All day, I hear the finches. I tried to count how many there were at the feeder--about 30 American Goldfinches and 25 Purple Finches. Besides the finches, there are Cardinals, Woodpeckers (Downy, Hairy, Red-Bellied), Carolina Chickadees and Wrens, Tufted Titmouses, Chipping Sparrows, and White-Breasted Nuthatches. On the ground, we still have Fox and White-Throated Sparrows and Dark-Eyed Juncoes. I never know which day these winter visitors will disappear. The Eastern Towhee made its first appearance about a week ago--yesterday there were 3 males but no females. Not at the feeders, I have seen the Yellow-Bellied Sapsucker at a hickory tree and Pileated Woodpecker in black cherry and oak trees.

Last week, I was sitting on our back deck not far from the feeders when I heard a Tufted Titmouse sound an alarm call. I looked around for my cat, thinking she was near but instead, a Sharp-shinned Hawk came flying by, no more than 5 feet off the ground. He was not successful, the birds having fled because of the alarm call. Who said living in the country is not exciting? 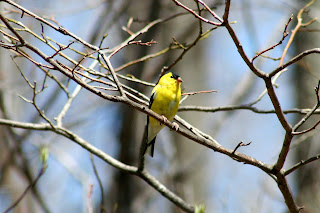 The bright yellow of the American Goldfinch is striking. 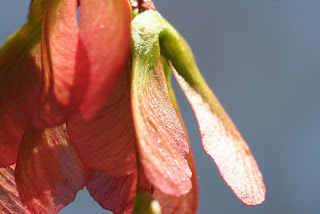 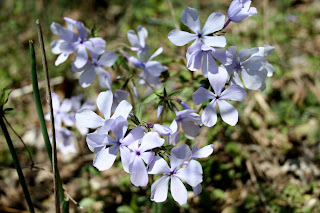 Blue Phlox (Phlox divaricata) was blooming at the edge of the woods along several old logging roads.
Posted by Appalachian Lady at 9:27 AM