A welcome 1/2 inch of rain came last Thursday, but since then, skies have been sunny. So, it's dry again. Yesterday, I took advantage of another cool, sunny day to go on a walk on our many old logging trails. 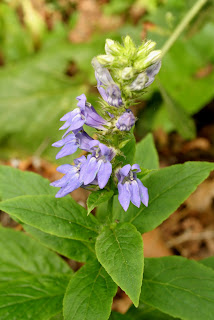 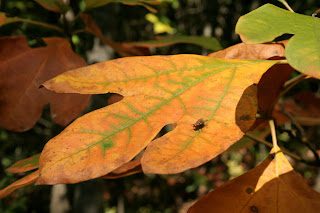 Some of the leaves of the dogwoods are turning brown rather than maroon this year. Sassafras trees are faring better, with leaves a beautiful orange as you can see in the picture above.

I haven't seen too many caterpillars but butterflies are still in abundance. For several days, I saw a Painted Lady in the yard. Pearl Crescents are everywhere along with Spicebush Swallowtails. 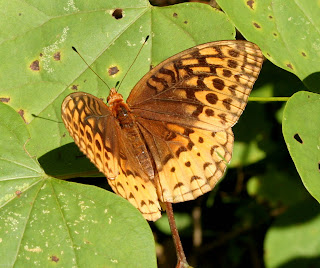 This Great Spangled Fritillary was easy to photograph.

I keep noticing what I thought was a white, fast-flying damsel fly in the old pastures. Finally, I was able to catch up with one on a leaf.... 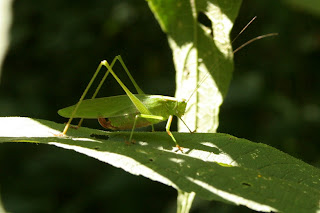 To my surprise, it was a katydid.
Posted by Appalachian Lady at 10:07 AM 2 comments:

Earlier this week, I attended a great naturalist presentation by Frank Taylor, a local high school biology teacher. During his talk, he mentioned plant/insect interactions and specifically goldenrod and a yellow and black beetle. His talk inspired me to look at goldenrod a little closer.

Yesterday, I looked for monarch caterpillars--about 6 of them I have been observing all week in a couple of old pastures. They were nowhere to be seen but I could not find any chrysalis either. So, I turned my attention to a stand of goldenrod. 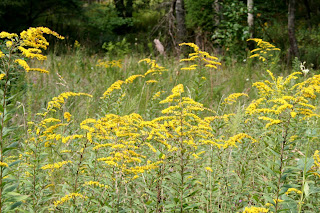 The beetle Frank mentioned was there in profusion. 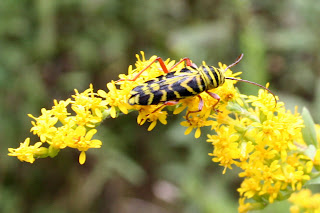 The yellow and black striped beetle is the locust borer, whose larvae wreak havoc on the black locust. But, other insects also caught my attention... 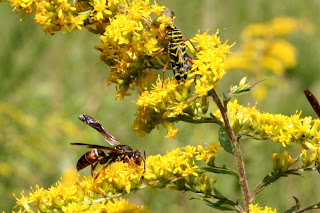 A locust borer and spider wasp feed together on one plant. 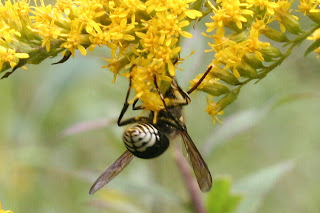 I caught this hornet in an unflattering pose. Besides these insects, I saw soldier beetles, butterflies, and a variety of bees.

The insects on the goldenrod make me reflect on the finding this week that scientists believe they have found the cause of what is killing the honey bees: a virus. Honey bees were originally from Europe and they are kept in hives in close quarters. Hundreds of these hives might be trucked to farmer's fields which consist usually of one crop. So, in contrast to the diversity of insects in the goldenrod community, the same species of bees is counted upon to pollinate the crops. Viruses are known to be more prevalent where people are in close quarters (e.g. schools, offices) so it is not surprising to me that honey bees would succumb to viruses. Perhaps the beekeepers could learn something from the goldenrod community.
Posted by Appalachian Lady at 10:19 AM 2 comments:

The purpose of this post is to share my thoughts on electronic nature journals or blogs. I liked setting up this blog--it was easy and it looked good right from the start. When I made my first post, I felt self-conscious, though, about my writing because it is so public (the world can see me now). That's probably a good thing because I check for spelling and grammar. The blog is a good place to post photos although I have so many I could not begin to post even a fraction of them.

My electronic journal is not going to replace my paper journal. First, I need something for the field, when I am away from the computer. I cannot see myself taking a laptop into the woods. I can quickly jot notes in the journal, not even bothering to make sentences. If I say I would write something when I get back to the computer, it doesn't work. By the time I get back on, I have forgotten what I had seen.

Also, the drawings in my journals have an immediate connection with the notes as you can see in the sample journal entries. I see a lot more detail by sketching a bug or spider then I would by photographing it (most of the time the darned things won't sit still anyway). Drawing allows you to understand and remember more about what you are observing than if you simply took a quick photograph. 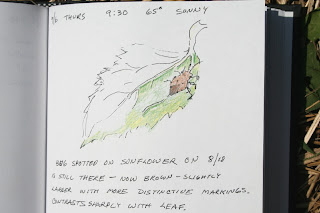 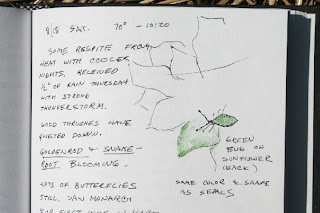 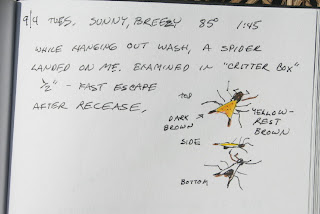 The major advantage of an electronic journal is that you are likely to share it with others, especially if it is a nature blog. As such, you can invite people to comment or help you with identification (like that mysterious spider that landed on me). The disadvantage is that you are removed from nature to a certain extent.

The major advantage of a paper journal is its intimacy with what you are trying to observe-- nature. It is a permanent record that can be accessed pretty easily. The disadvantage is that it is not easily shared with others.

So, I will continue to write my electronic blog while using the paper journal as the original source.
Posted by Appalachian Lady at 1:50 PM 2 comments: