A mysterious tree grew up at the edge of the driveway. We had cut down two oak trees in the area because they were interfering with the satellite service. Also, we worry about trees falling on the house, guess that's what we get for living in the woods. Anyway, I planted a couple of rhododendrons and let blackberries and whatever wanted to grow up there. Last year, I noticed an unusual tree among the blackberry briars. The leaves were very long, lanceolate and the flowers were pink.

It was a peach tree, probably planted accidentally by my husband who likes to throw peach pits off the front porch and into the woods. The lovely blossoms froze unfortunately so there was no crop last year. Nevertheless, I watered the tree during the drought last summer, fertilized with compost periodically, and cleared the briars from the base. 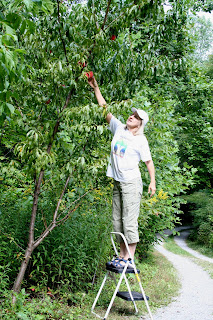 This spring, the tree grew by leaps and bounds and was covered with beautiful pink blossoms. Twelve fruits grew slowly but eventually ripened. Today I picked them all! 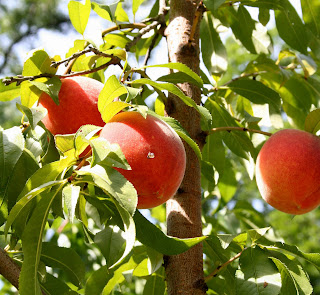 I got out a bigger ladder to get the ones at the top. 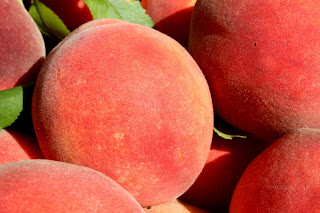 I had to admire my free peaches, perfectly shaped and colored. Now, I understand why the artist Paul Cezanne painted them so much. 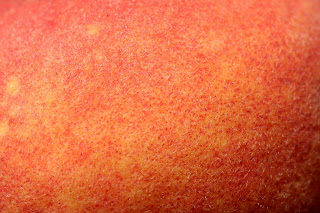 The texture and colors are almost like a watercolor (hope Chris is reading this).

I promised my husband I would bake a peach custard pie in exchange for his excellent horticultural skills so I better close and get to work!
Posted by Appalachian Lady at 12:39 PM 8 comments:

Giant Swallowtails and the end of summer

The end of the summer seems to be coming fast. Already, the nights are getting cool which is a blessing. Katydids and crickets still make their lovely sounds, drowning out most other sounds. The butterflies are still going strong--tiger swallowtails, fritillaries, crescents, skippers and more. 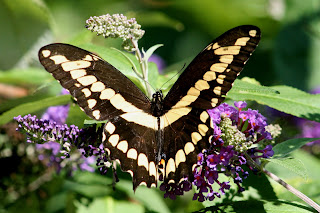 This Giant Swallowtail is the largest butterfly on our land, here feeding on the butterfly bush (not native but great for butterflies). The caterpillar resembles bird poo so now that I know that, I may be able to identify it on ash trees which would be its host around here. When provoked, it sends out orange "horns" so the caterpillar is called "Orange Dog" in Florida where it is considered a pest on citrus trees.

The other day, I saw a Pipevine Swallowtail on the ground. I reached for it and abruptly stopped. The poor butterfly was being stung by a wasp. I watched while the wasp repeatedly stung the butterfly and then devoured its head all within a matter of minutes! Later in the day, I saw the same thing happening to another Pipevine Swallowtail butterfly. I know the butterflies were on their last days but still I felt so sorry for them. 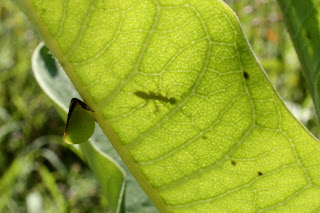 Where are the Monarch caterpillars this year? All I have found are other insects on the leaves (see photo above). I have only seen one Monarch butterfly as well. 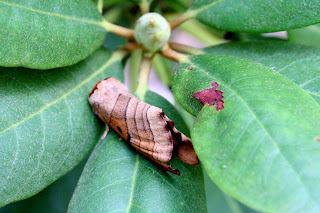 Last month, I spotted this moth. He would have been well camouflaged on leaf litter but stood out well on the Rhododendron. The moth was almost as large as the Regal Moth I had posted earlier--at least two to three inches. Hopefully, someone can identify for me. 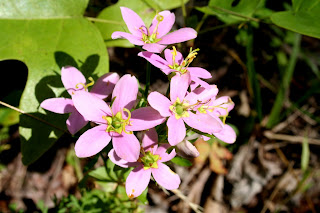 This Rose Pink (Sabatia dodecandra) is one of my favorite flowers of late summer. The plant grows to about one feet in our old pastures and flowers until early September. I tried transplanting it to the house but it did not survive so I will try collecting the seeds.
Posted by Appalachian Lady at 3:35 PM 2 comments: