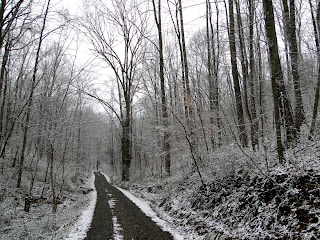 About 10:00 a.m., I walked down the driveway to get the newspaper and take a couple of photos of the snow which had covered the ground and trees.

As I walked down, I heard more than the usual number of crows. Maybe they were crowing about VCU's big win over Kansas in the NCAA tournament yesterday. It's not Virginia Tech but it's Virginia anyway! 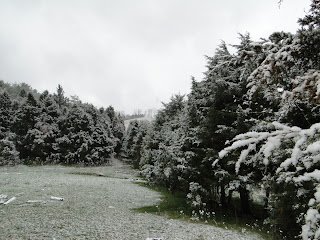 The snow covered the redcedar trees across the road, giving cover to lots of wildlife including turkeys, coyotes, and northern cardinals. 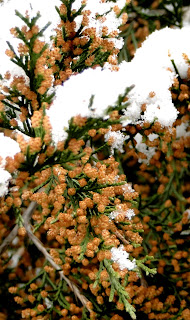 This closeup shows the male flowers of the Redcedar tree. So, I was wondering if my bees were bringing in some of this pollen a few days ago. I counted at least 5 different colors--beige, yellow, orange, gold, and red. 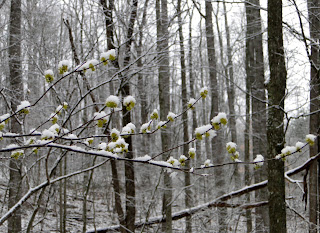 Even the blooming spicebush shrubs were covered in the wet snow. 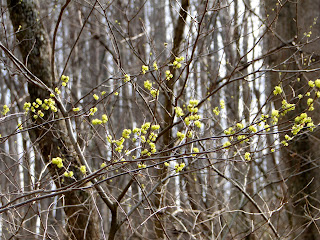 This was how they looked 5 days ago. 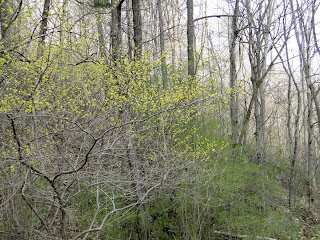 Spicebush with Hawthorne in bloom March 23, 2011

The hawthorne shrubs had already leafed out but won't bloom until next month. 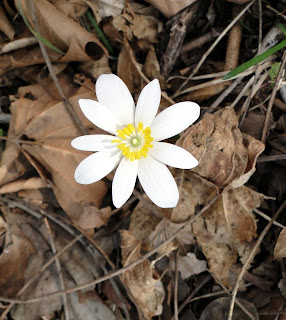 The bloodroot had bloomed too already.


By the time I got back up the driveway, the snow had already melted! And when I turned on the television, I learned we had a 2.5 earthquake at 4:00 a.m. only a few miles from where I live. That's spring for you!
Posted by Appalachian Lady at 1:33 PM 7 comments: 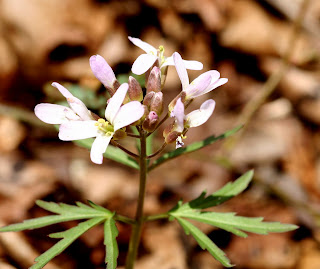 Temperatures have been steadily warm for the past week, prompting the early spring wildflowers to begin blooming. 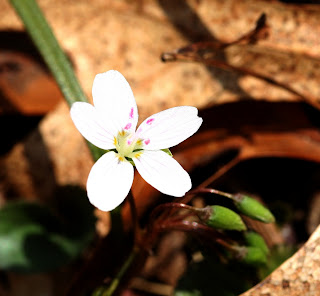 Happy first day of spring everyone!
Posted by Appalachian Lady at 11:17 AM 7 comments: 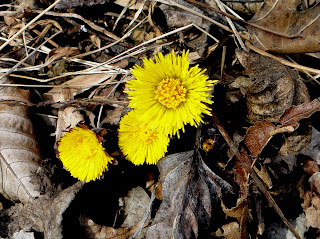 Yesterday, I spotted many coltsfoot flowers. These come up in early March or sometimes in late February, several weeks before most forest wildflowers. The flowers fade and die long before the leaves appear in late summer. For a long time, I didn't make the connection. So, if you haven't done so, here a picture from late summer: 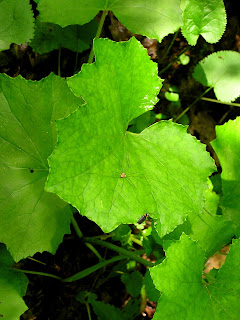 The leaves line our driveway and old logging roads. Although colstfoot is not native, having been brought here by the colonists to use in cough medicine, I find them to be lovely and not very invasive.

On a walk yesterday, I spotted another eastern hemlock tree on our property. That makes three that I know of although there could be others. Across the eastern part of the United States, these trees are slowly being killed by woolly adelgid (Adelges tsugae). None of our trees show evidence of this bug which eats the sap leaving eggs which look like fungus on the underside of the leaves. I don't know if it is because our trees are immature (about 30 ft. tall) or because all three trees are so isolated from other hemlocks. 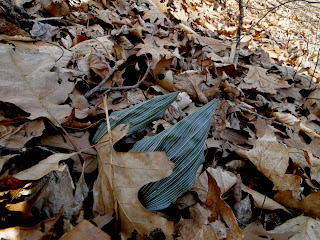 Can you help me identify these leaves? On the same walk yesterday, I found these leaves that looked like they had sprouted in the past week. I see them every year. They seem to have no flowers or maybe they are just the opposite of coltsfoot--with leaves first and then the flowers much later. I looked up all the possible flowers in the lily family since these leaves have parallel veins (notice how prominent they are). But, I couldn't find anything that came close.

I thought I would ask since I had good luck on the mystery pupae on my last post--Marvin said it was probably the pupae of a Cecropia Moth. I agree after looking at the images he linked. Maybe I will see the beautiful moth emerging one day.
Posted by Appalachian Lady at 11:37 AM 13 comments:

First Butterfly of the Year and Artist Inspiration 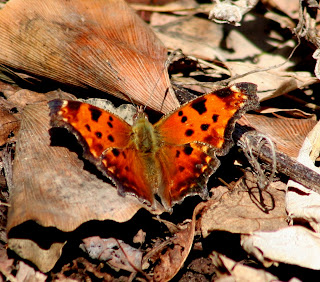 I saw my first butterfly this year while working on a volunteer project for my local Virginia Master Naturalist chapter. We were just about to get started measuring trees in a forest tract next to the Virginia Tech stadium. The butterfly caught our attention while warming up in the sun (approximately 50 degrees).

The comma, like all anglewings, overwinter as adults in cracks of trees. Anglewings are true woodland butterflies and are commonly seen feeding on salts in dirt roads in the forest. I see them all summer in my driveway and marvel at how they come out on warm days. But, I think this is the earliest I have seen one, attesting to this winter's warmth.

References: Butterflies of North America by John Feltwell and another book with same title by Jeffrey Glassberg. 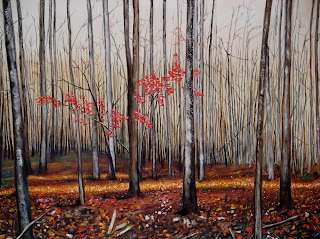 Painting from Norbert Hauput's blog inspired by my photo

One of my photos I published last spring inspired an artist to do a painting. I thought at the time it would make a good watercolor painting but I never did it. So, I am glad Norbert did one--it's beautiful.

One of the reasons I write this blog is to inspire people about the Appalachian mountains. Perhaps, it will motivate people from far away (like Norbert from California!) to be concerned about the destruction of the mountains through mountaintop coal mining. In the meantime, I will keep documenting the beauty of our part of the Appalachians. 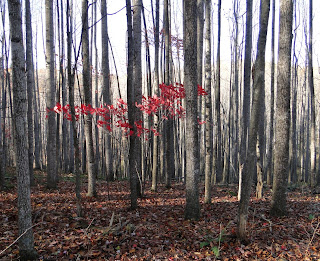