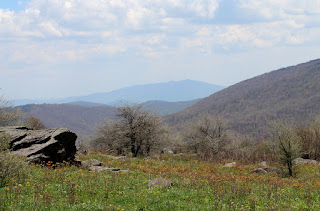 I attended the Mt. Rogers Naturalist Rally in southwest Virginia. Before the rally, my friend and I hiked from Elks Garden to the Lewis Fork Wilderness Area. The photo above shows how spring is about two weeks behind where I live. 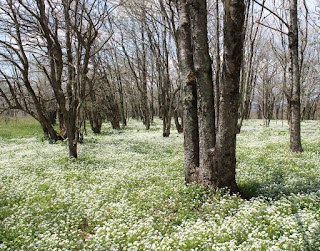 We were excited by seeing a carpet of white flowers.... 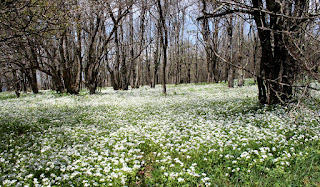 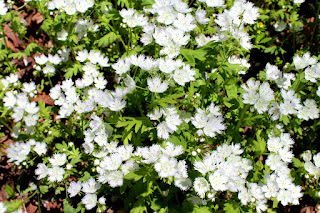 actually it was fringed phacelia. 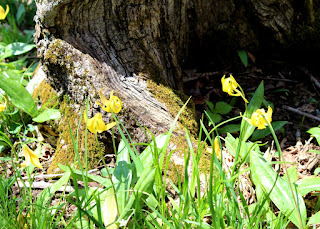 We also saw quite a few trout lilies in bloom.


On Friday evening we have a dinner and talk. Our speaker this year, Allen Boynton, talked about endangered populations of vertebrates in southern Blue ridge:


He recommended that we contact our representatives in congress about sponsoring "The Recovering America's Wildlife Act" which would help to protect endangered wildlife.  For more reference, click on this website.

As I like to do at each rally, I chose to attend the session with the speaker which was birding.  I also wanted to check out the campground.   We saw and heard many birds including blue-eyed and red-eyed vireos, chestnut-sided warbler (my favorite), Canada warbler, yellow bellied sapsucker, yellow-rumped warbler, veery, wood thrush, and catbirds. We heard and saw a wood thrush. Everyone was so appreciative of their songs while I realized I hear them all the time at our home in the woods.   Above the horse campground, we saw blackburnian warblers (both male and female) as well as heard ovenbirds.  Dark-eyed juncos were here even though they have left our lower elevations.

On Whitetop Mountain, we went on a walk with ecologist and forester Austin Thomas who discussed why red spruce are found mostly here because of the high elevation. 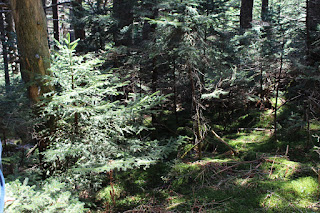 The dark forest was very cool. 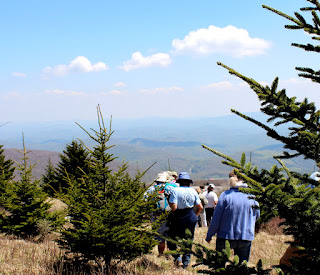 At the edge of the forest was an area where spruce trees were beginning to colonize.  This is a research site now with naturalists helping to collect data to determine the health of the forest.

Winter and spring have been very unseasonable to say the least.  January started off with bitter cold like many other years then became warmer until it was downright hot in February, days at a time so that we had ticks all winter.  March was stormy, cold then warm,  with our power out four different times, 10 days all total.  I did not feel spring until late April.  Now, May is getting hot again.

I am often asked since I live in the woods if I see any changes due to climate change.  Like many old-timers, you do sense a change in the climate.  Invasive plants like multi-flora rose grow all winter.  But native plants vary.  Some came up early like spring beauties but others like trillium waited until May when the weather was warm.  I did not see any of my lovely showy orchis but others spotted them in early May, weeks later than their usual blooming period.

Our columbine bloomed first week in May while usually it blooms in early April.  In fact, I put out the hummer feeders when they bloom.  This year I put them out the first week in April with a hummingbird coming April 9, well before the columbine was blooming.

Today my husband found a snapping turtle in the driveway.  I went down to take a photo... 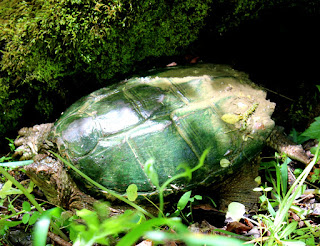 I posted on Facebook (Joan Kark) and a friend sent me this NPR link:

Stand Back When Snapping Turtles Crop Up In The Garden

The article says that the turtles come on land only once a year to nest, just like sea turtles that come ashore.   I hope no one eats the eggs like was suggested in this article.

Speaking of turtles, I moved a large box turtle to the side of the road (in the direction I thought he was going).  Box turtles only have about a mile and half radius territory and should never be moved from it or they will forever wander, looking for their home.  This box turtle's home, a wide strip of former woods between Walker Creek and the road, had been cleared of trees.  I hope this old turtle can survive there.

Posted by Appalachian Lady at 3:48 PM No comments: