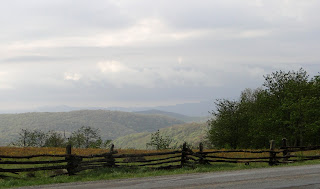 The Mt. Rogers Naturalist Rally has been going on since the 70s and is always held at Mt. Rogers area. This was my first time to attend (May 7-8) and I was not disappointed. First, the registration only cost $5-but was worth far more. Secondly, the naturalists spanned all ages and backgrounds. Most were from Virginia but one person came as far away as Washington state.

Kevin Hamed, Associate Professor of Biology at Virginia Highlands Community College, gave a great presentation on southern Appalachian salamanders Friday evening. Virginia is home to 78 species of the 300 species of salamanders in U.S. The mountains, and particularly the Mt. Rogers area, contain the most diverse species. Globally, over 46% of the species of salamanders are threatened due to a variety of factors (climate change, habitat loss, diseases and pathogens, pesticides i.e. Roundup, invasive species, and over exploitation i.e. for food).

Kevin led a great field trip the next morning where we collected salamanders. What impressed me most was how excited the children were about looking under rocks and logs for salamanders. They kept yelling "I found one" and running back to Kevin to see what it was.

For the most part, we used zip lock bags to keep the salamanders for a little while so as not to hurt them with acids from human skin. After everyone got a good look, we put them back where we found them as the different species are very territorial and might eat each other. 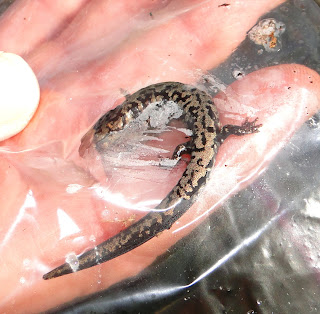 This salamander is beautiful--lovely gold and black--a real jewel. Weller's Salamander resides on Whitetop Mountain where we collected these and on Mt. Rogers. It generally lives above 5000 ft.

Information on the discoverer of the salamander which is named after him is from comment below:
"His name was Worth Hamilton Weller, he had just turned 18 in May and died a week after graduating high school. his younger brother live into his 90s and still thought about him all the time and what he could have done and missed. He was 13 when Worth went missing and was found four days later, dead in a creek clutching a specimen bag containing samples of this species."

This salamander isn't listed in my Peterson guide (Reptiles and Amphibians of Eastern/Central N.A.) yet it was plentiful in the area where we collected. It's another salamander that only lives in the mountains (Smokies, Mt. Rogers area) at fairly high elevations. It is not threatened. The kids got a big kick out of holding it and letting it crawl on their sleeves. It appeared to have a smile on its face. 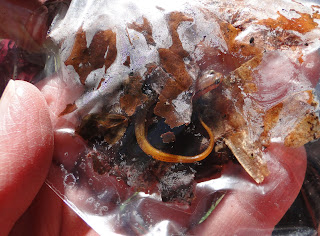 I collected this tiny young pigmy salamander under a rotting log where the larger red-backed salamander was within a few inches. Guess the red-backed doesn't eat pigmies. The pigmy does not have a aquatic stage and might be found on trees on rainy nights. It is found above 2700 feet in this area and in North Carolina.

Everywhere we looked, we saw trillium. It was a little disconcerting that we trampled quite a few while looking for salamanders. 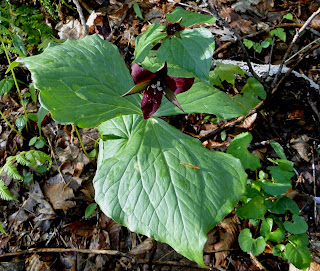 This is the first time I had seen this trillium. 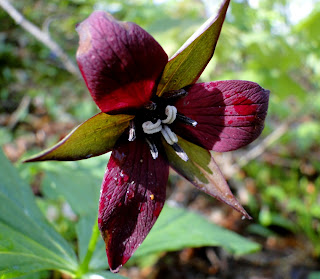 The color is more of a maroon than red or purple. 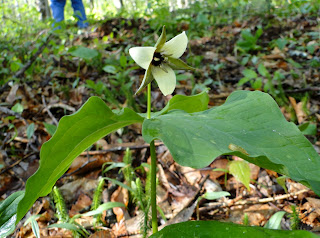 Several people referred to this trillium as the "yellow" trillium but I could not find it in my field guides. 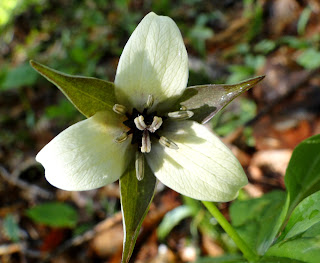 Our white-flowered trillium on our land peaks about April 24 so you can see the higher elevation is about 2 weeks behind us.

Special note: My rhododendron are past peak today (May 24) but Mt. Rogers will peak about June 7. I remember the first time I went down to Mt. Rogers to see them, I thought I was in the Garden of Eden! You can hike on the Appalachian Trail and see lovely flowers at the same time. Check out Mt. Rogers Recreational Area.
Posted by Appalachian Lady at 1:11 PM 12 comments: