Last week, a fellow Virginia Master Naturalist and I held an after-school program on nature at Pearisburg Public Library.  Our emphasis for this November 29 workshop was on what you can find that is green or blooming in the woods in the winter.  The children attending ranged in age from 6-12. 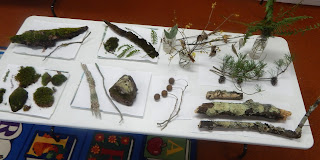 We had collected lichens, mosses, Virginia Pine, Witch Hazel flowers, and Christmas Fern.  When I talked about lichens, I asked the kids to pick out the different types on one small log.  I used a handout on lichens and Christmas Fern which I made for the program:

“A lichen, or lichenized fungus, is actually two organisms functioning as a single, stable unit. Lichens comprise a fungus living in a symbiotic relationship with an alga or cyanobacterium (or both in some instances). There are about 17,000 species of lichen worldwide.”  (https://www.livescience.com/55008-lichens.html)
There are several types of lichens:  leafy, cup-like, beard-like, and crusty (usually on rocks).  In general, you want to leave the lichens.  Lichens absorb pollutants so scientists can learn about air pollution by analyzing lichens. 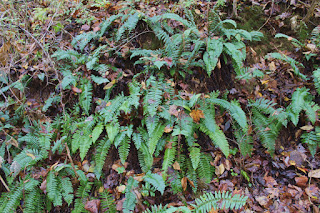 The Christmas Fern stays green all winter, unlike other ferns.   Winter snows will flatten the fronds though.  Fiddleheads or the coiled fronds appear in early spring while the rest of the previous year’s growth browns and decays.
The blade of the fern is lance-shaped with pinnae (look like leaves) all along.  On fertile pinnae, sori (brown areas on underside) are on the upper part of the blade.  These release microscopic spores into the air which is how a fern reproduces.
Christmas Ferns grow in the woods and are widespread because they tolerate both dry and wet soils.  The range of the Christmas Fern is the eastern United States, from the south all the way to Canada and west to Missouri.  Because it is bright green in December, the Christmas Fern historically has been used in holiday decorations.

The children glued leaves to color paper.  Then, they all did colored pencil drawings which I don't have any photos of unfortunately.  All of the children seem to have good drawing skills for their ages. 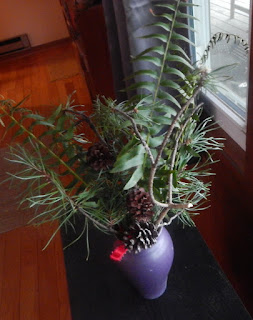 After I arrived home, I put the Christmas Fern and Virginia Pine in a vase.  The ferns only lasted a couple of days while the pine is going strong.

We plan to continue the programs next year in January since there does seem to be interest for them.

Posted by Appalachian Lady at 5:13 PM No comments: