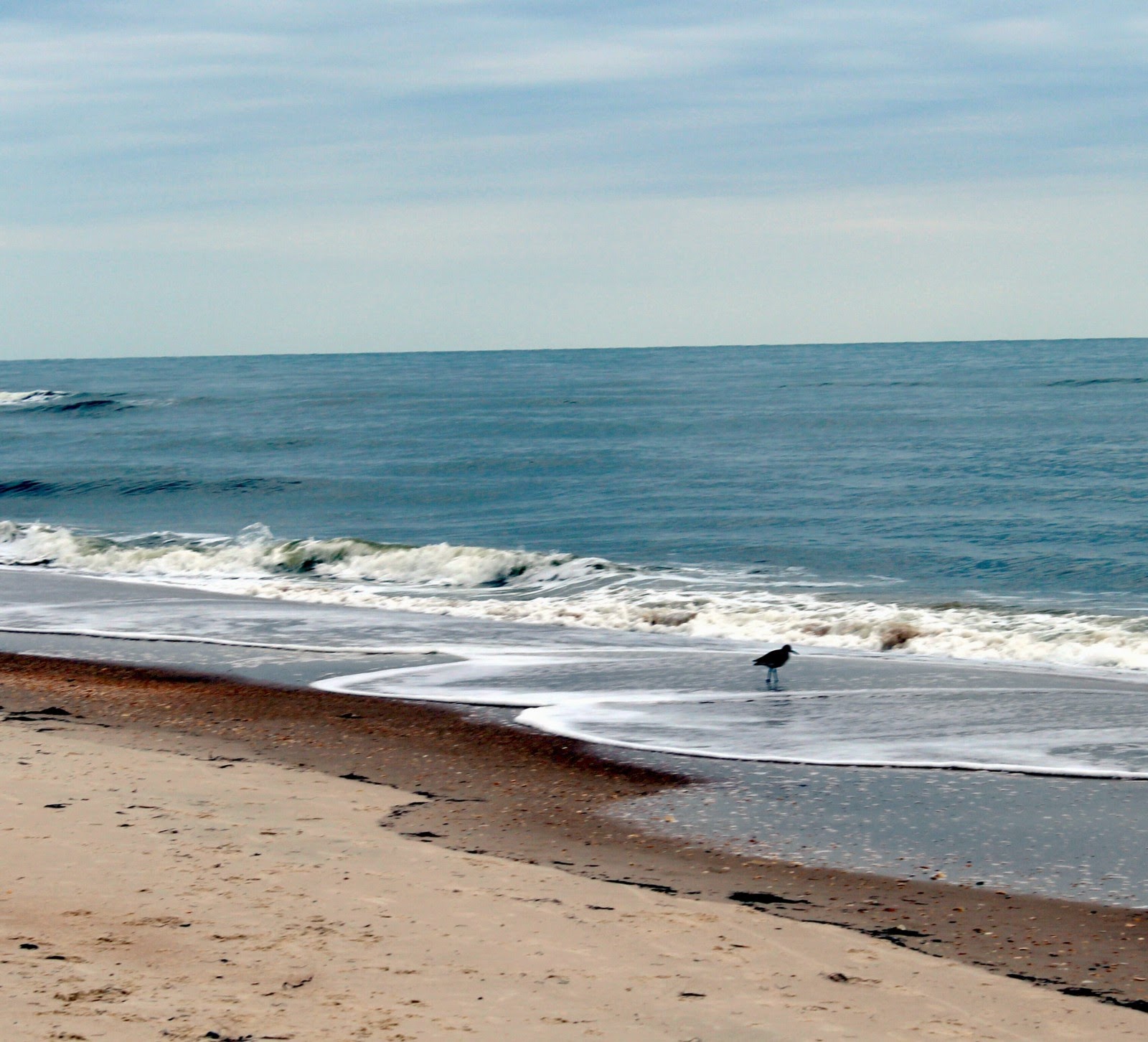 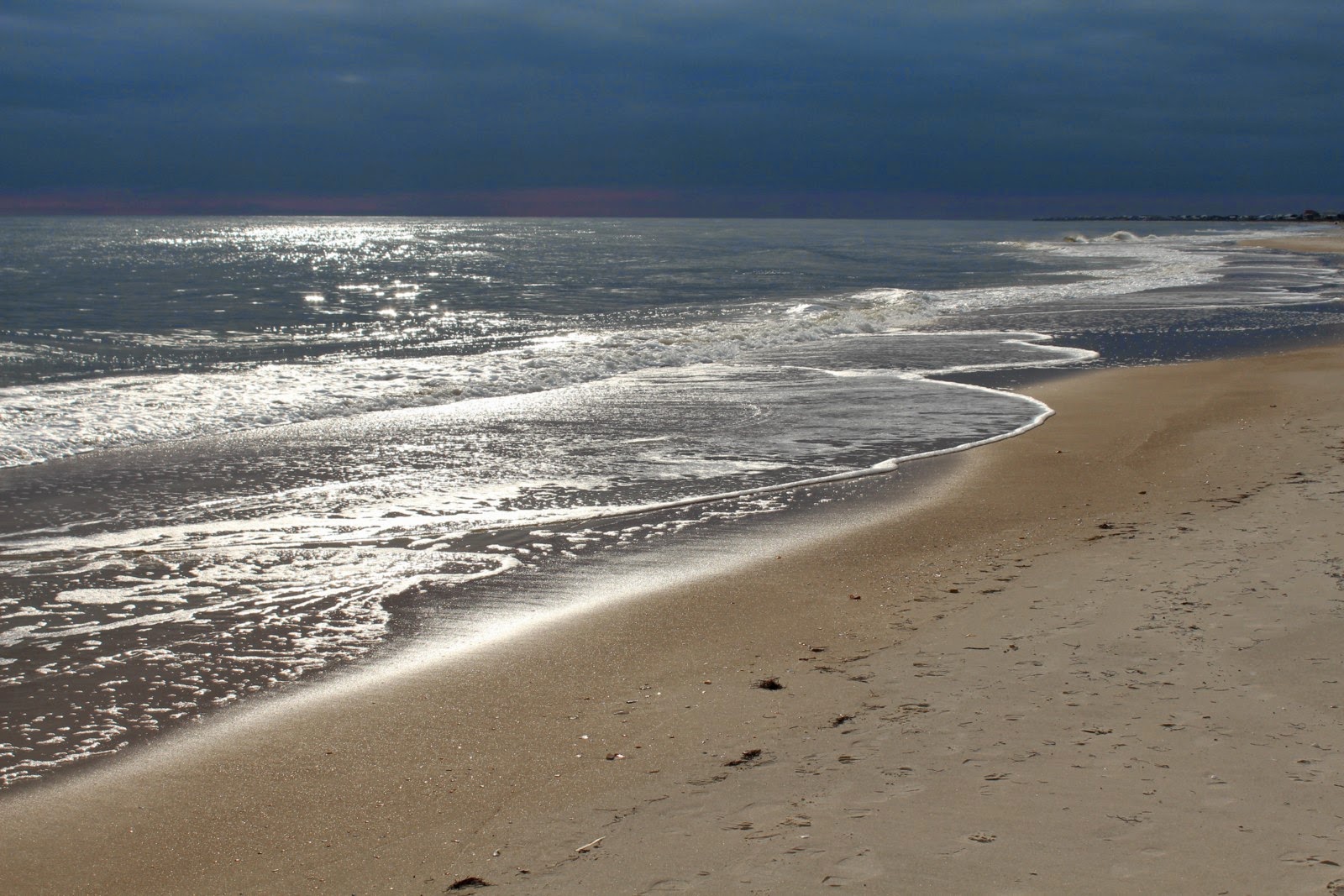 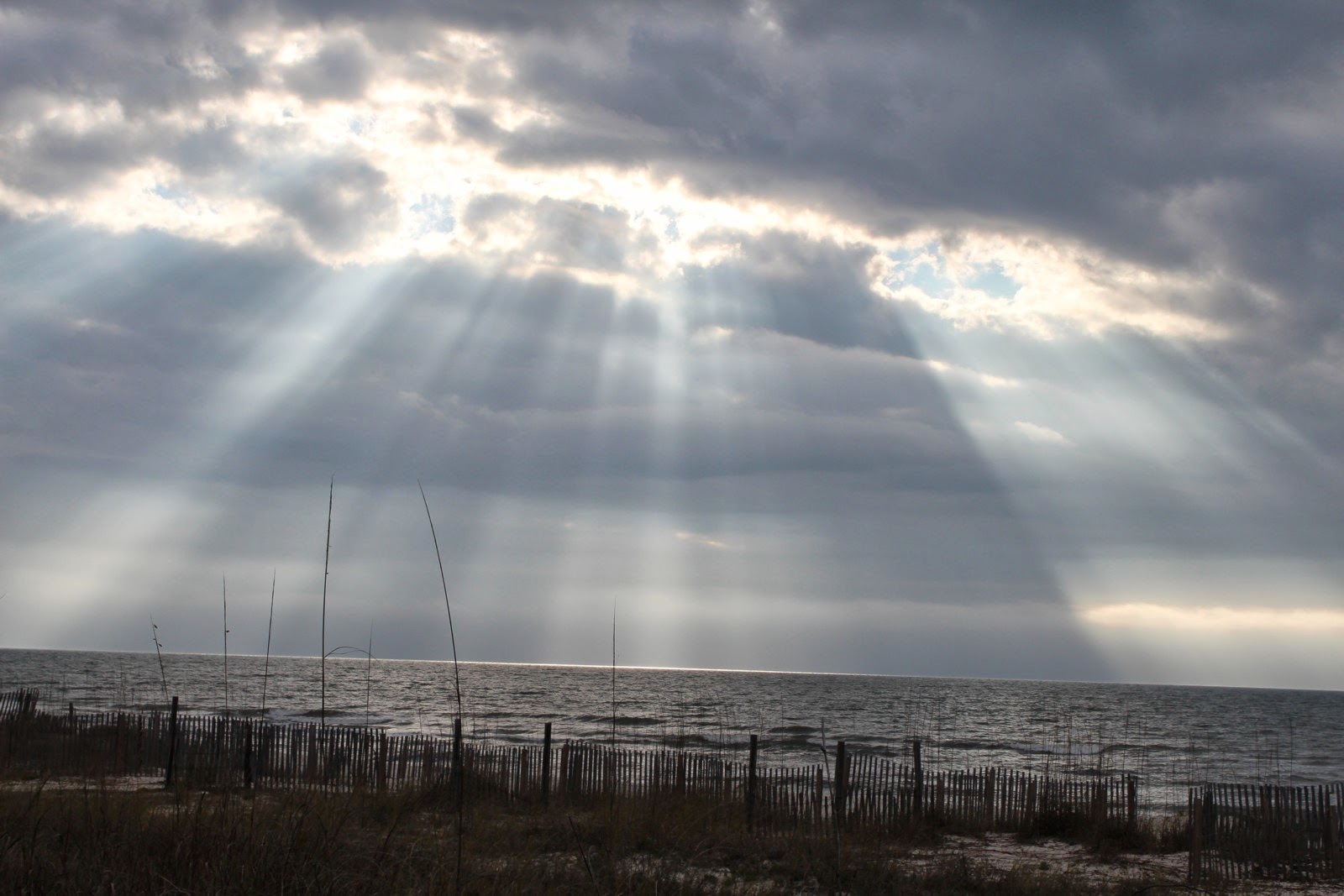 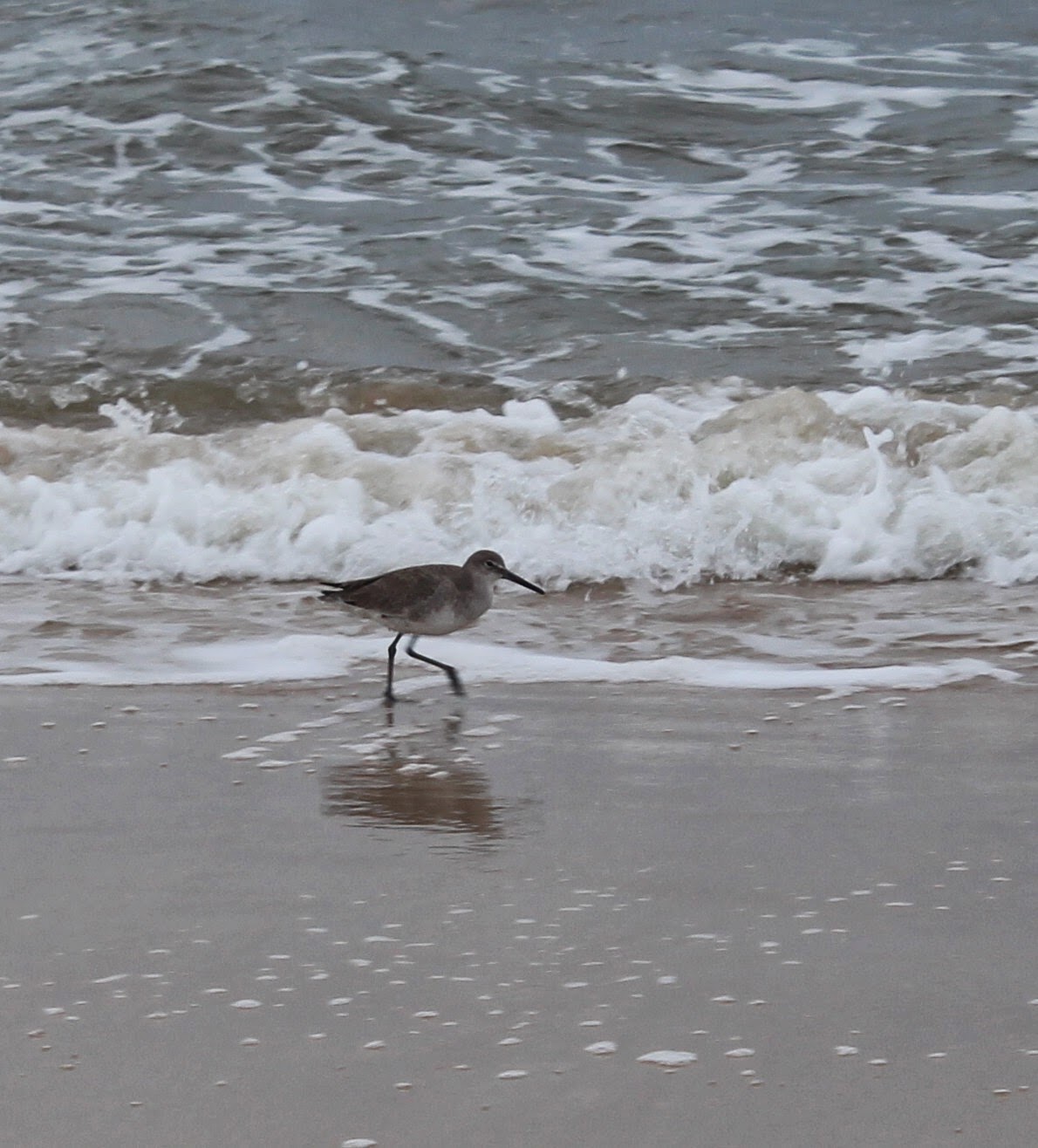 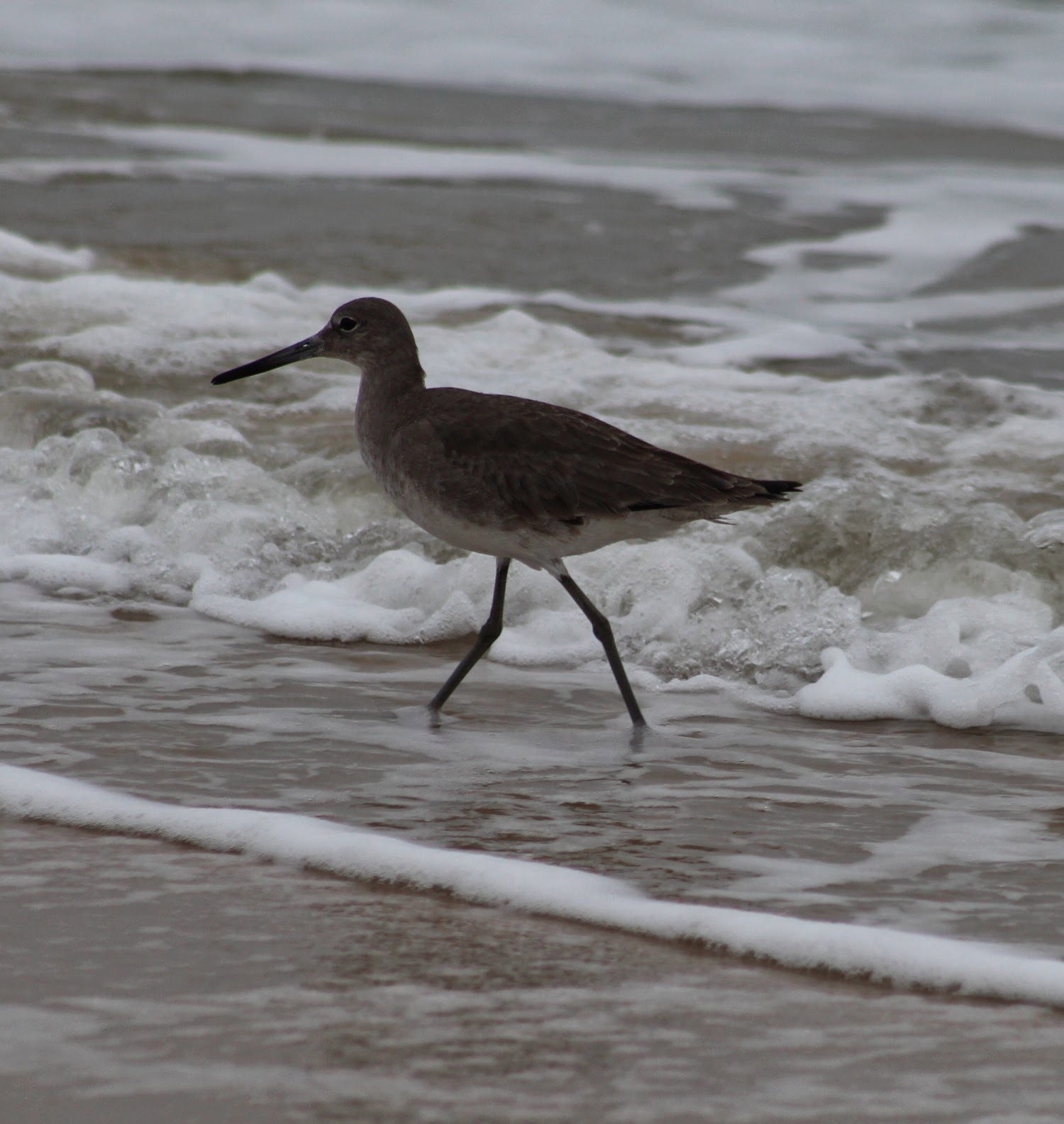 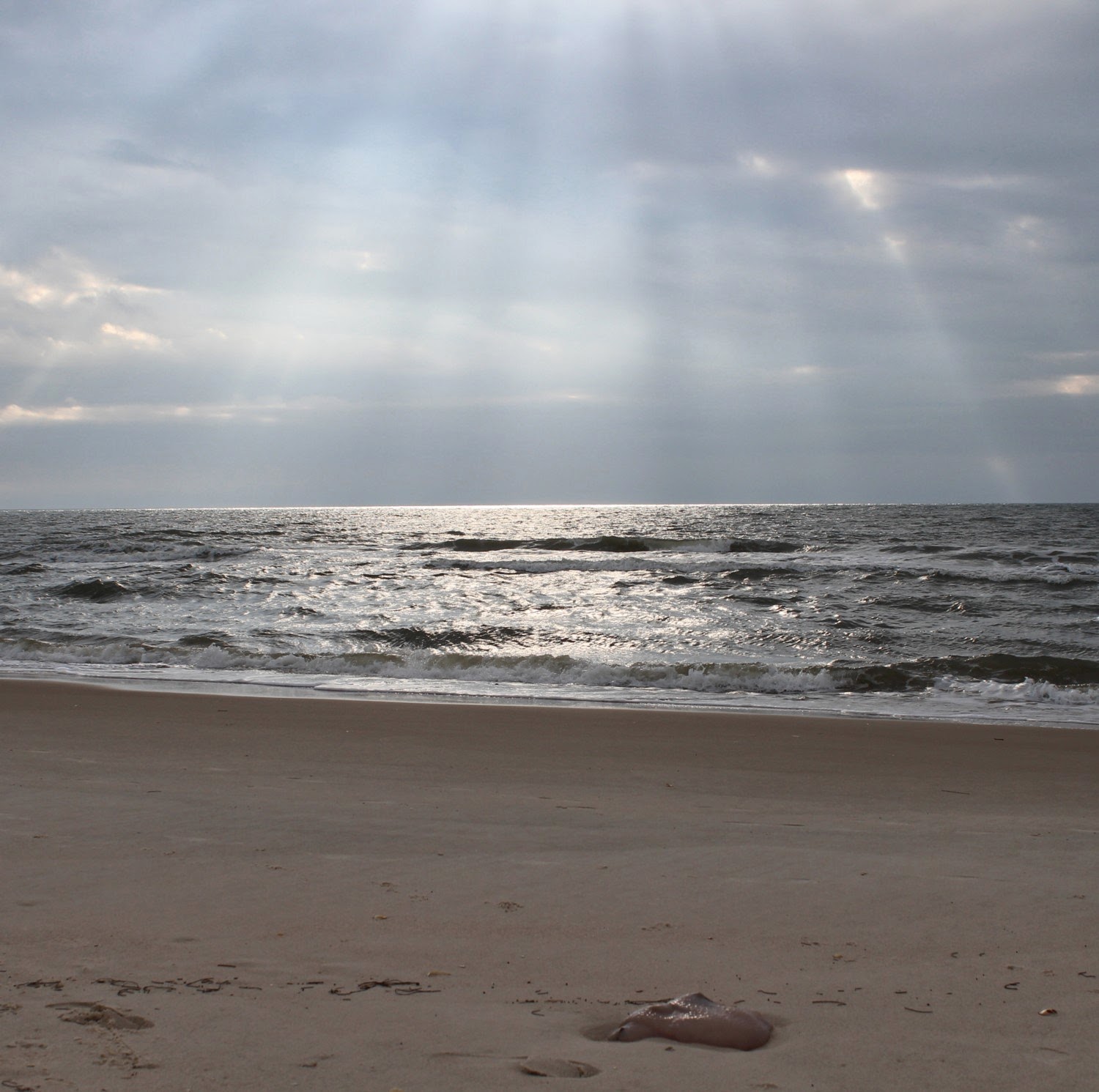 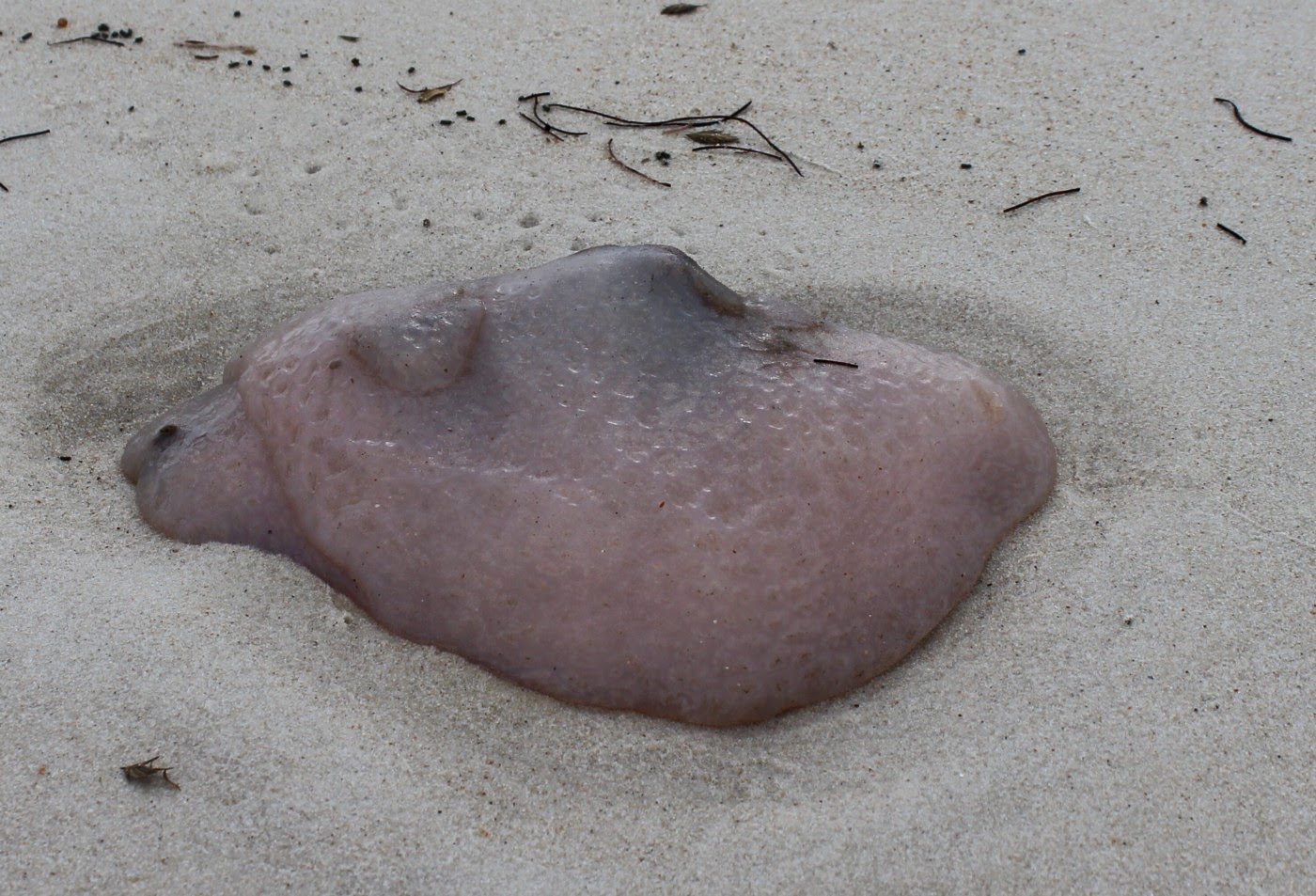 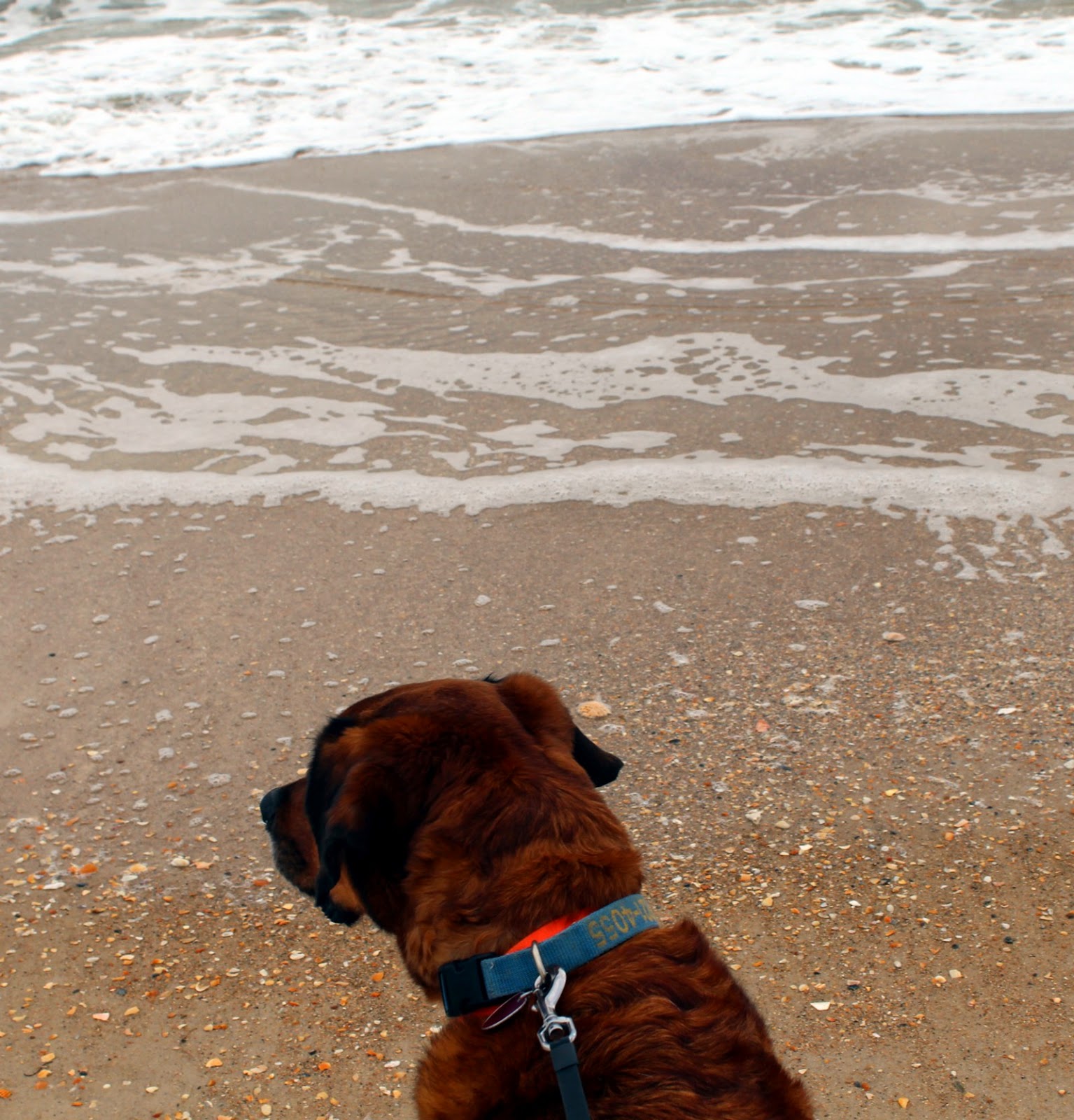 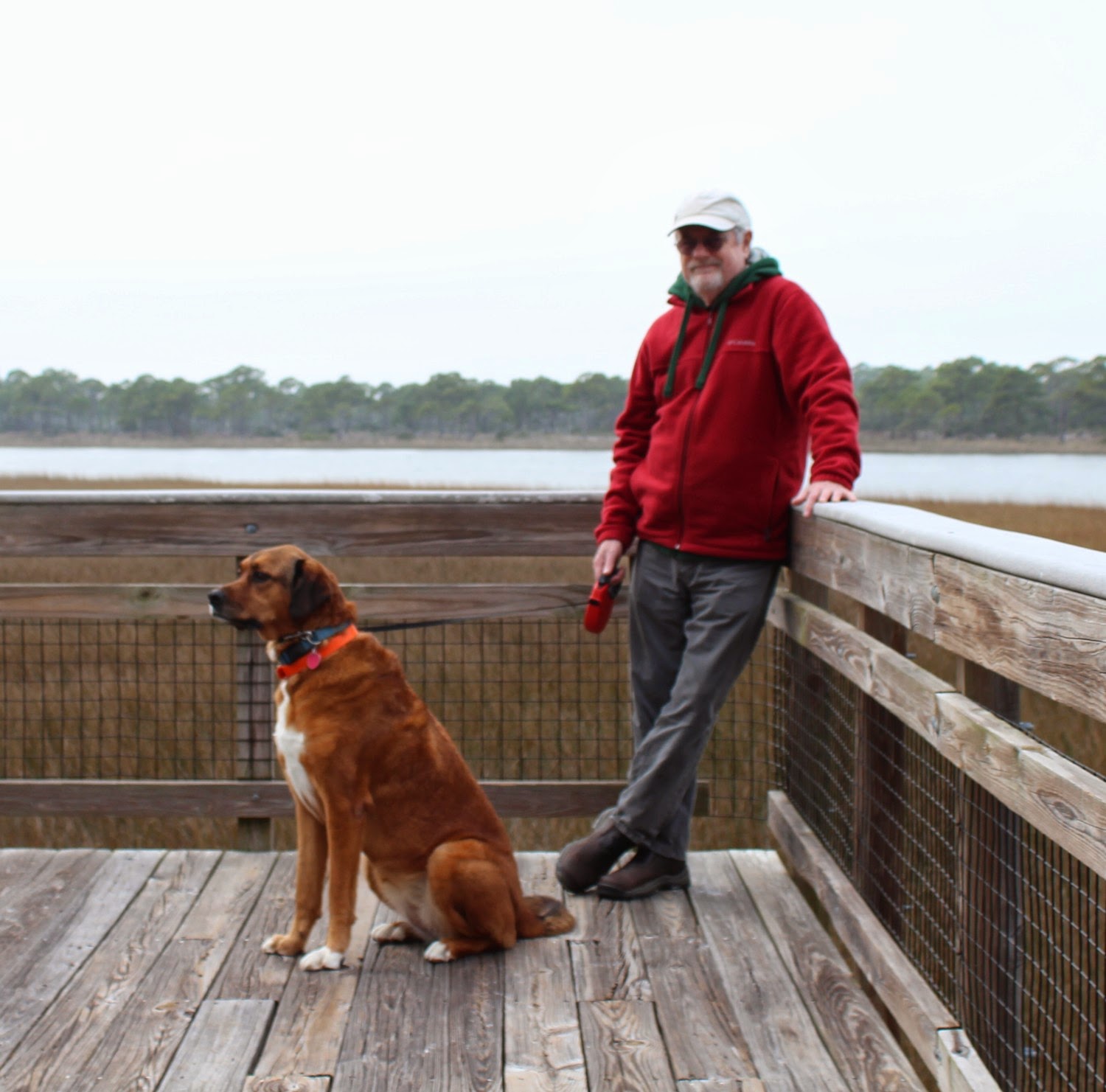 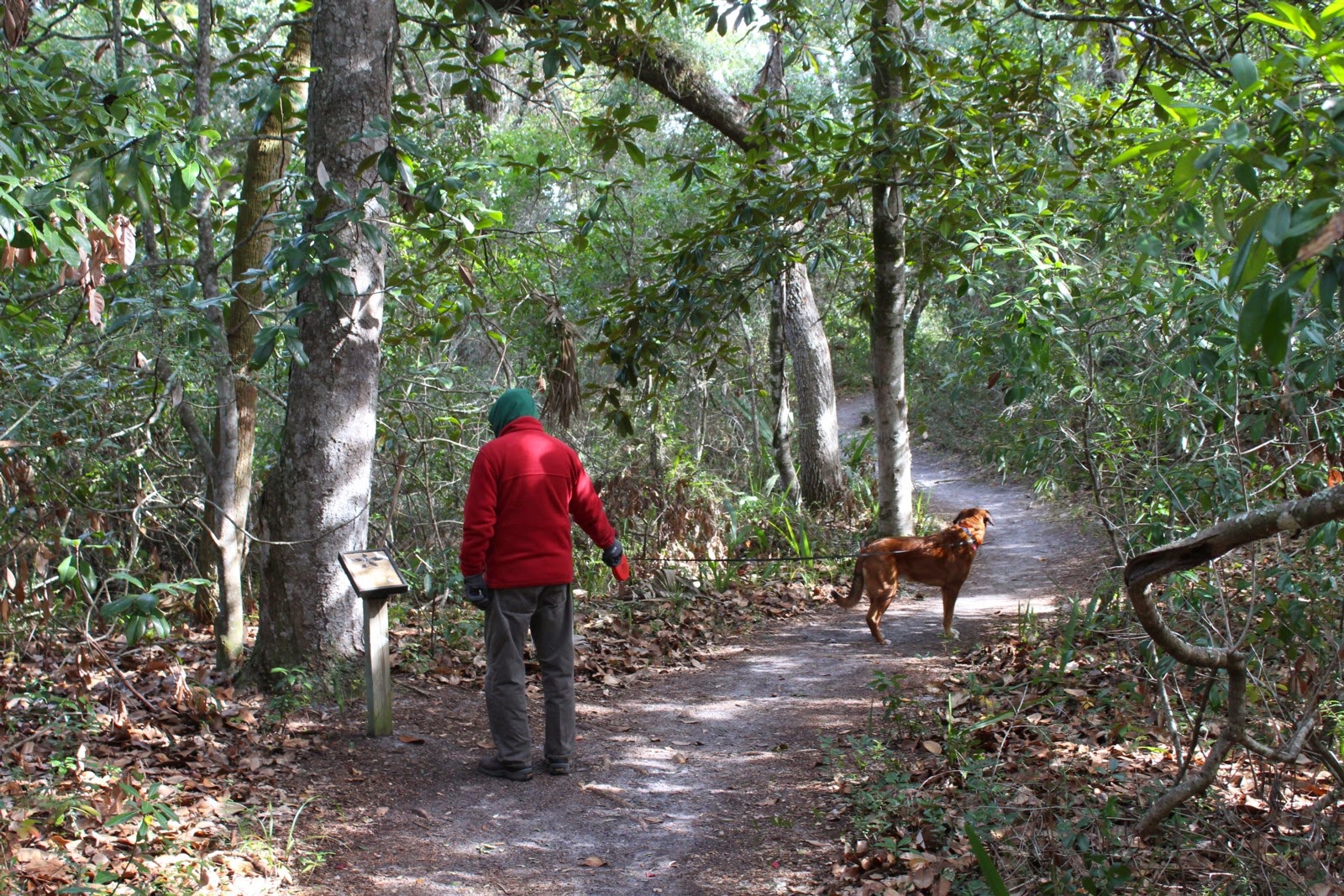 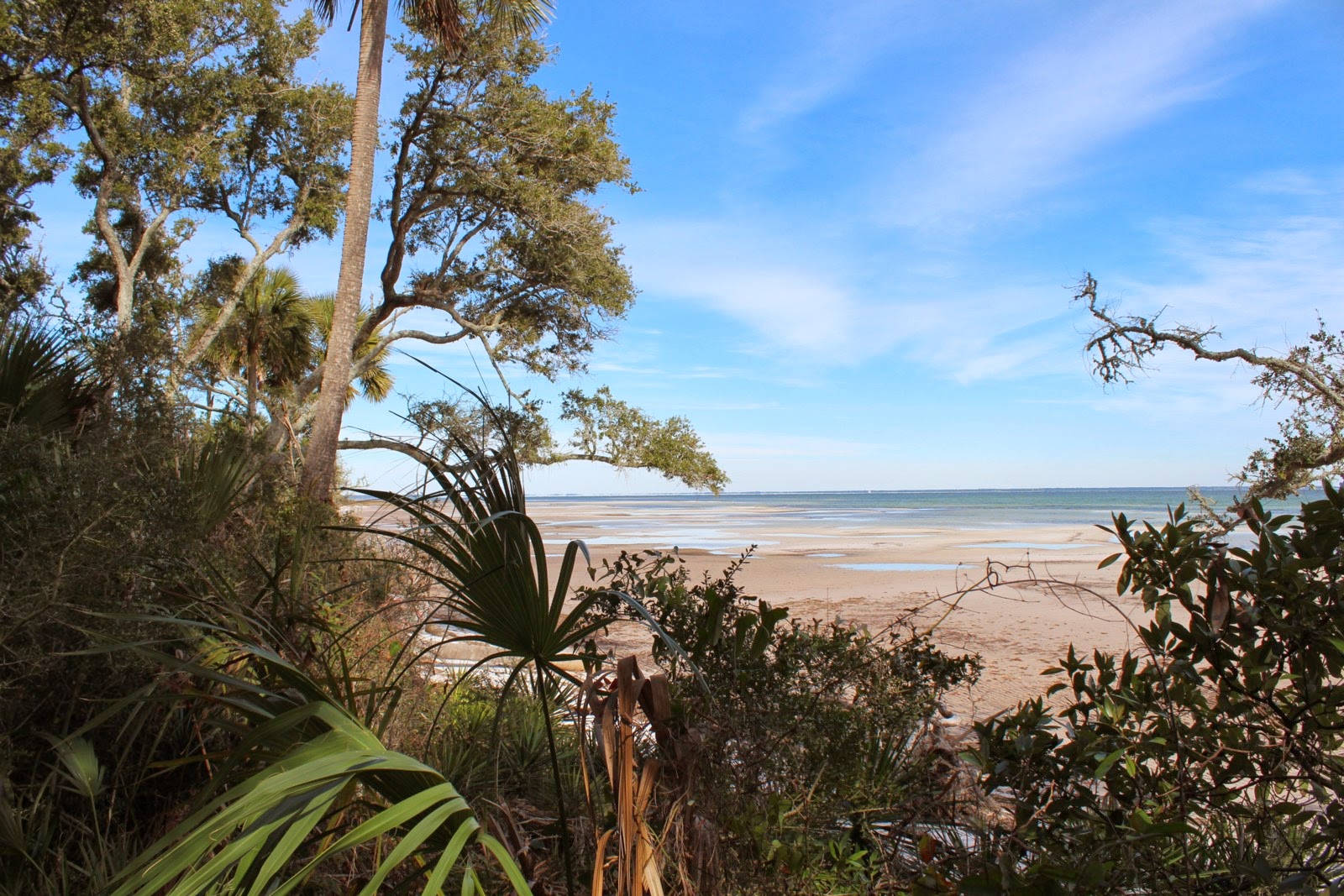 We went to the beach twice this year (our January trip to St. George is in the next post).  I rented a house through VRBO for 4 nights during Virginia Tech's spring break or the first week of March.  North Carolina had just had a big snow/ice storm before we arrived so we drove through water and around newly formed sand dunes to get there. 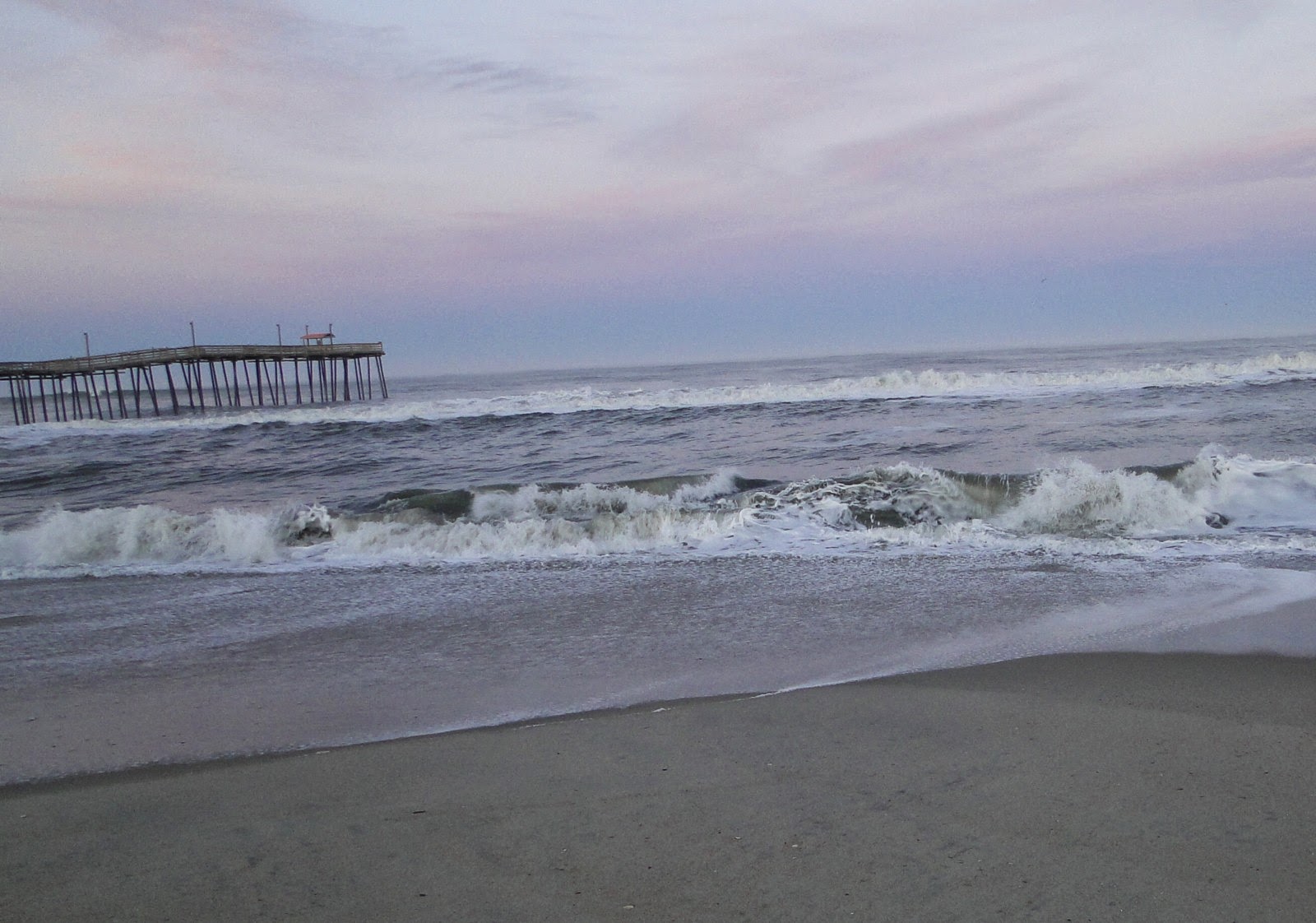 As soon as we arrived, I took a walk along the beach.  Rodanthe Pier appeared pretty shaky with the big waves. 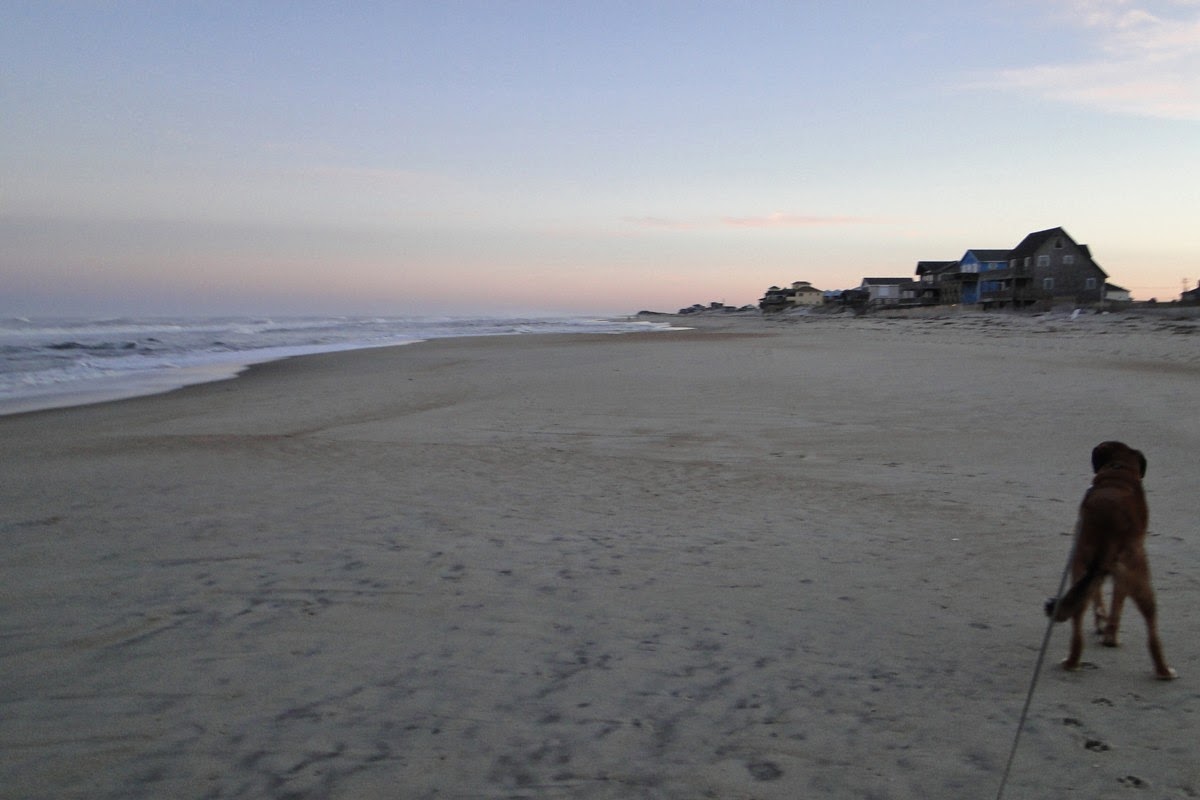 No one was on the beach which was nice, unlike the crowds we see when we visited in August years ago. 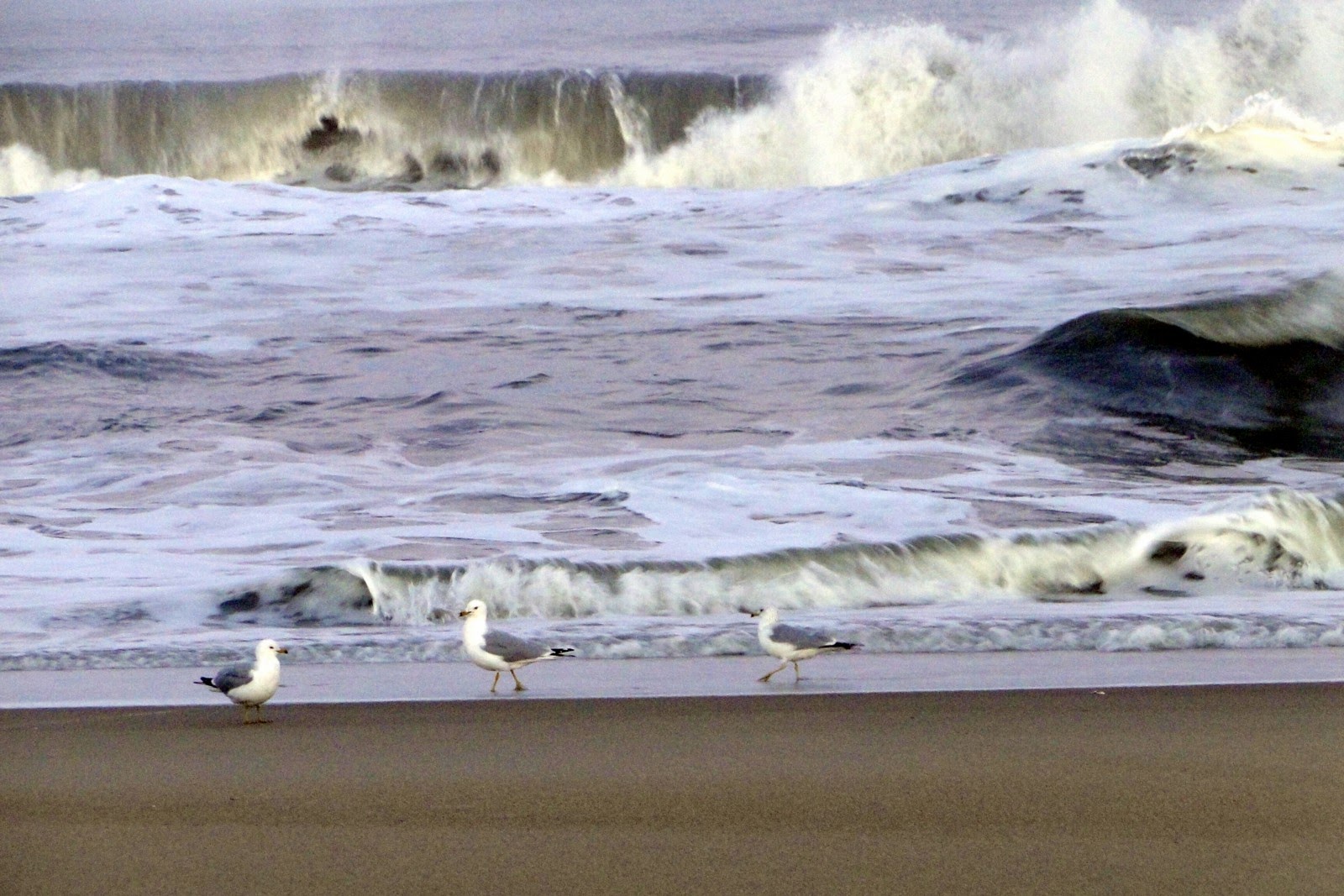 The waves were quite high. 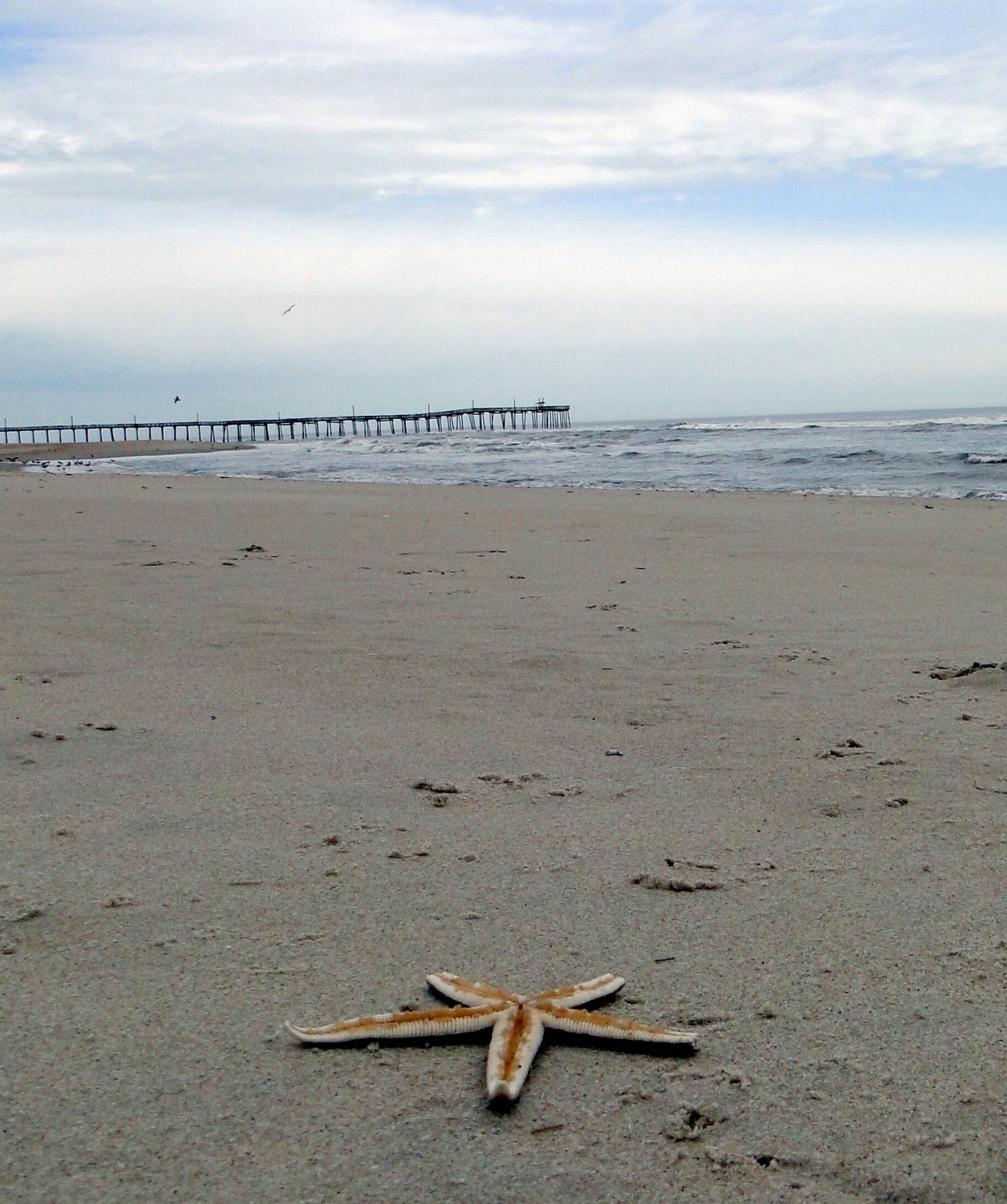 The next morning I collected perfect shells including a couple of nice conch shells and several starfish. 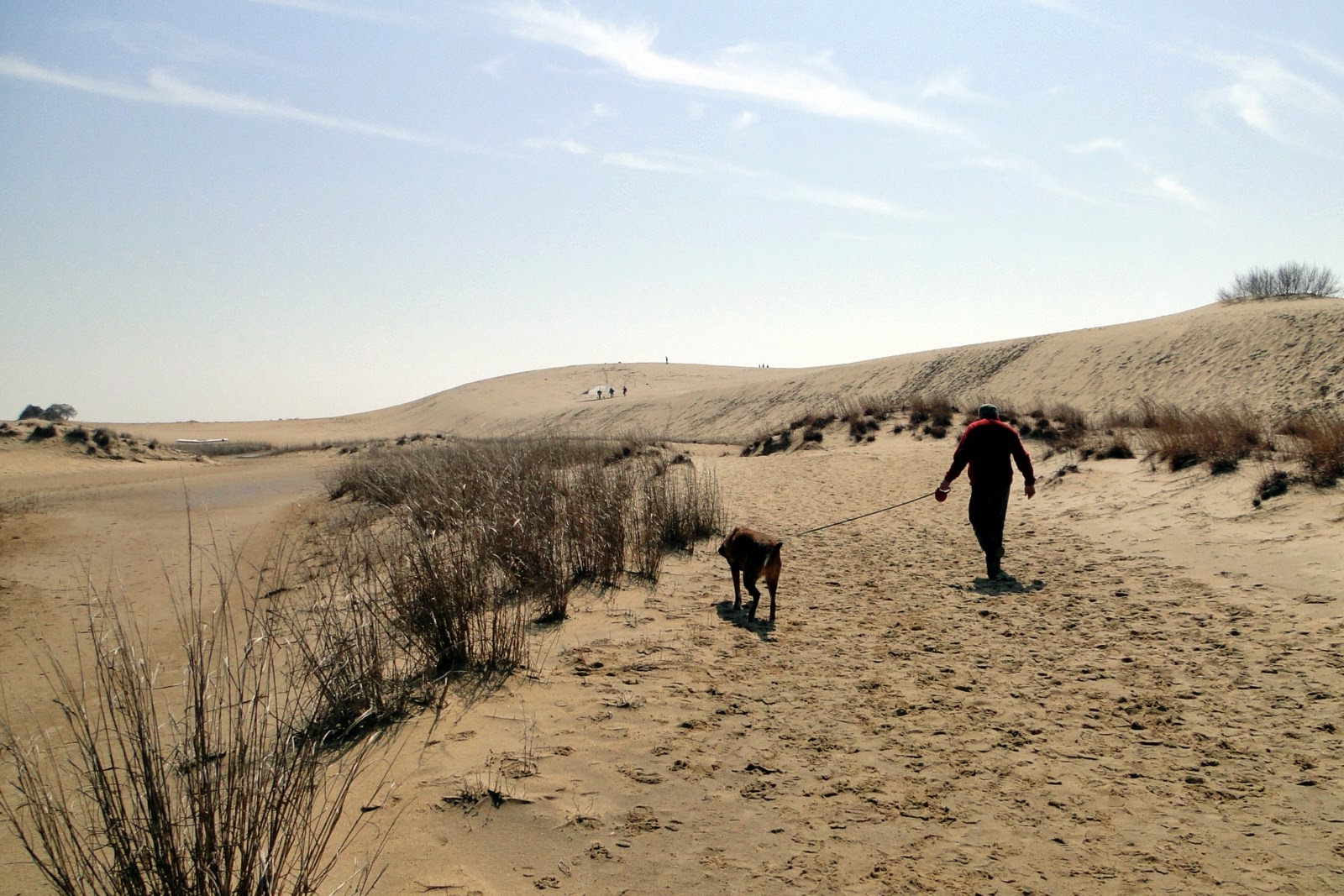 We then drove up to Nags Head to Jockey's Ridge State Park.  The hike to this largest sand dune on the Atlantic coast reminded me a little of the deserts in Utah. 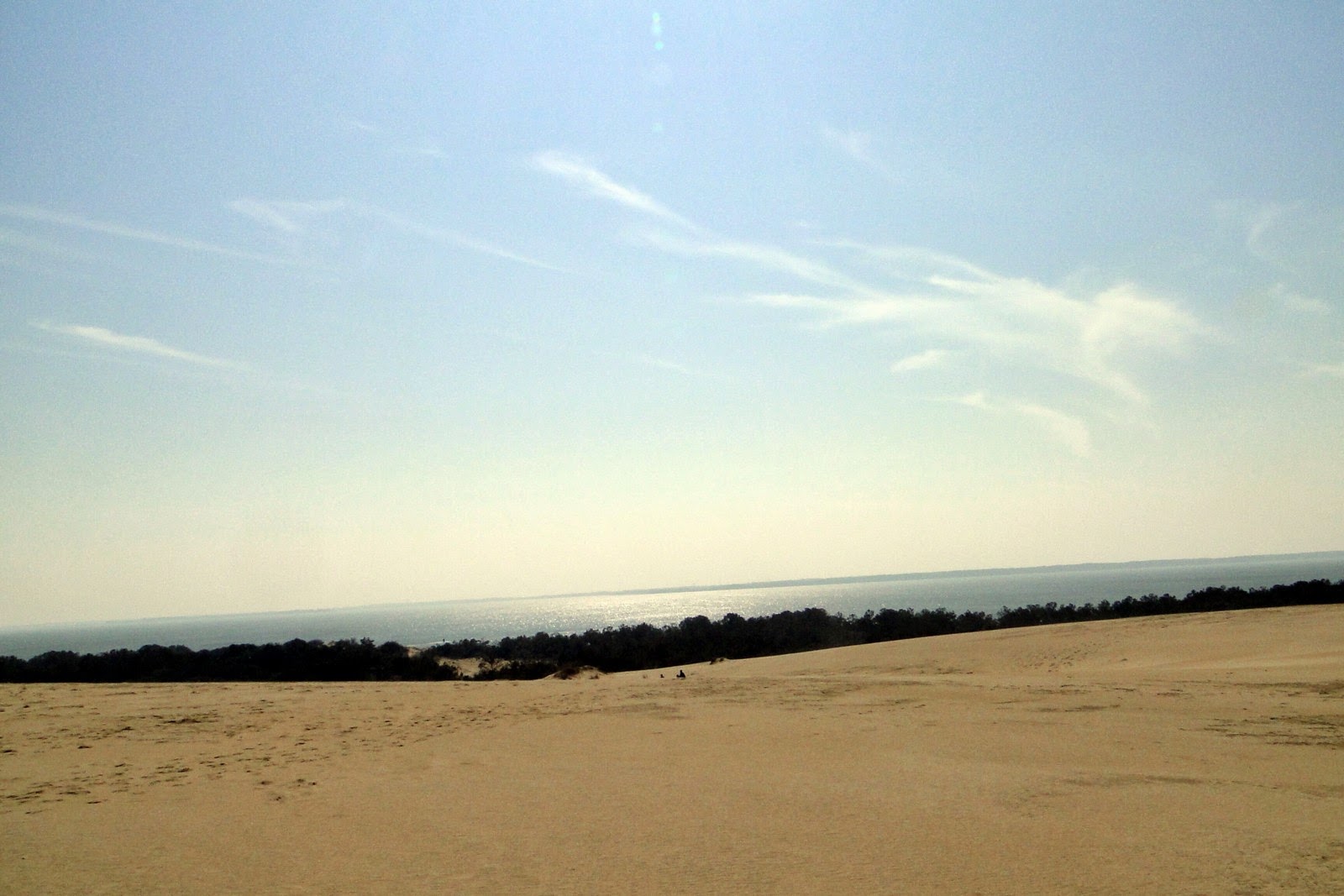 At the top of the dune, we looked east at the bay and Albermarle Sound. 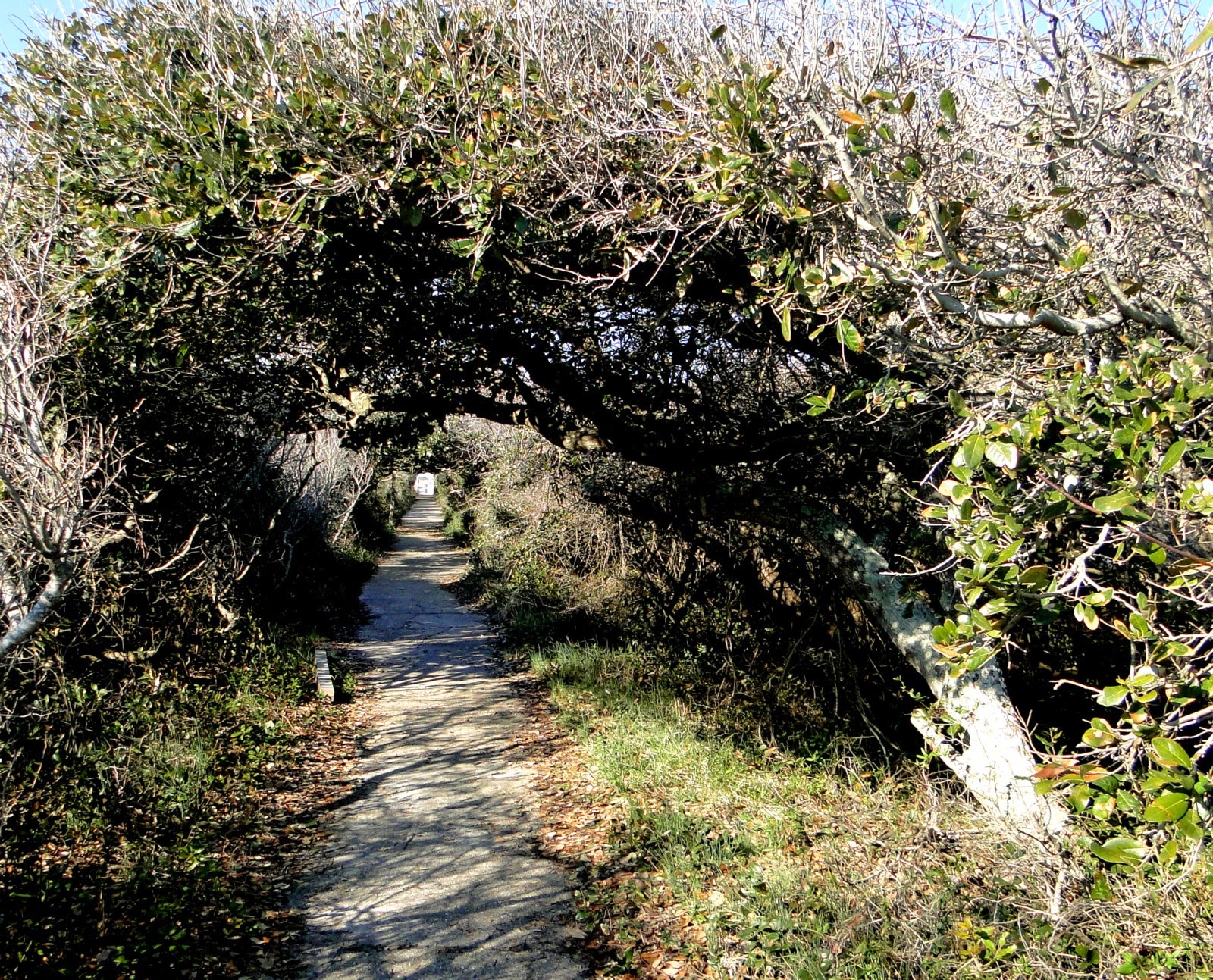 The next day, I went by myself to Pea Island Wildlife Refuge because dogs were not allowed. The southern boundary is only 2.5 miles from Rodanthe. 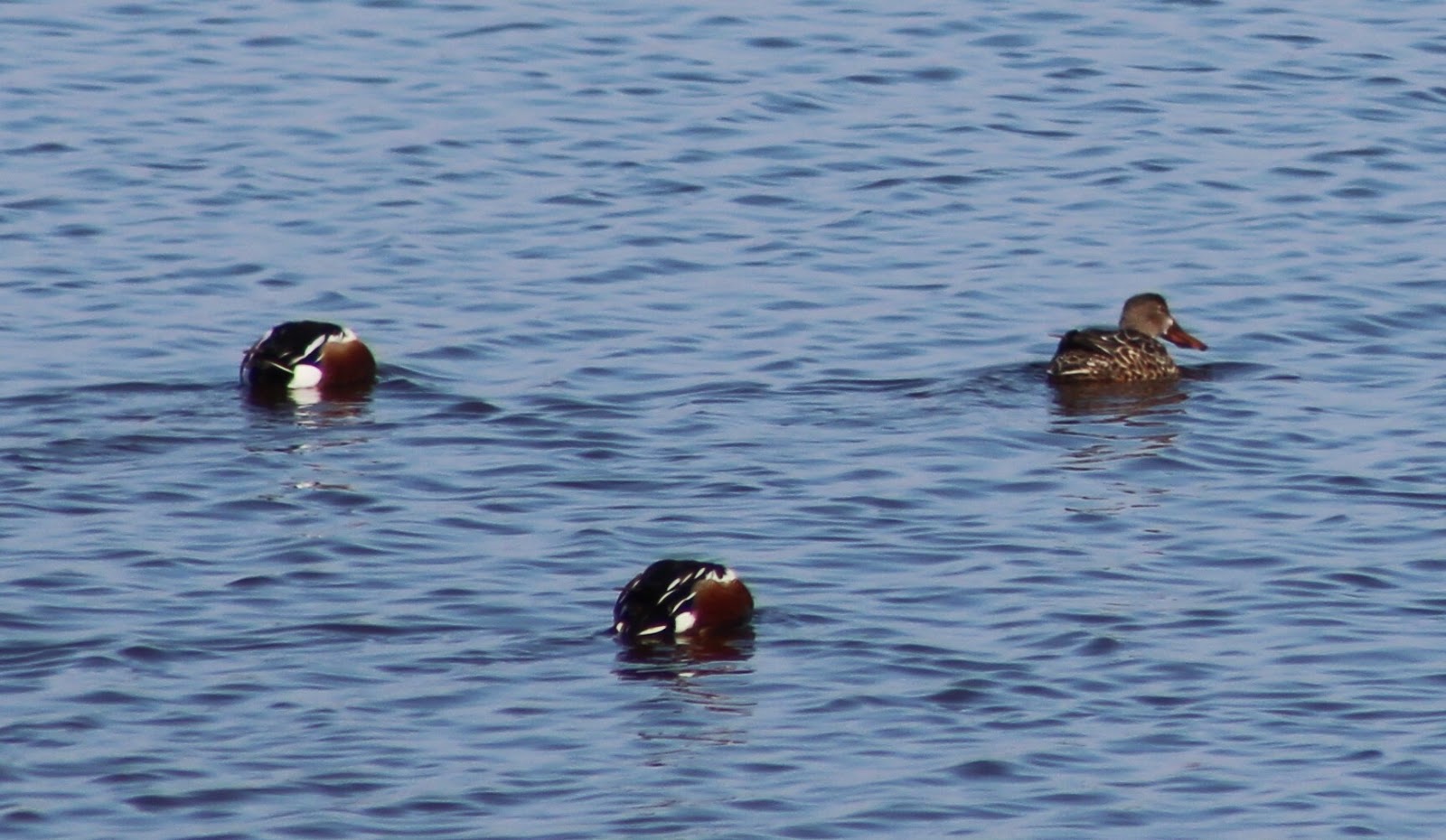 I saw a lot of these Northern Shoveler ducks.... 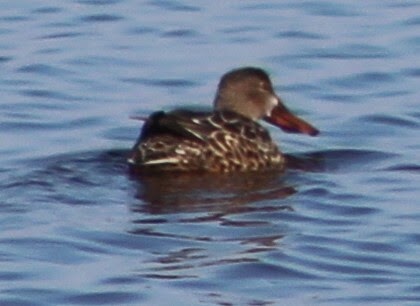 Northern  Shovelers have the largest bills which make them fairly easy to identify. 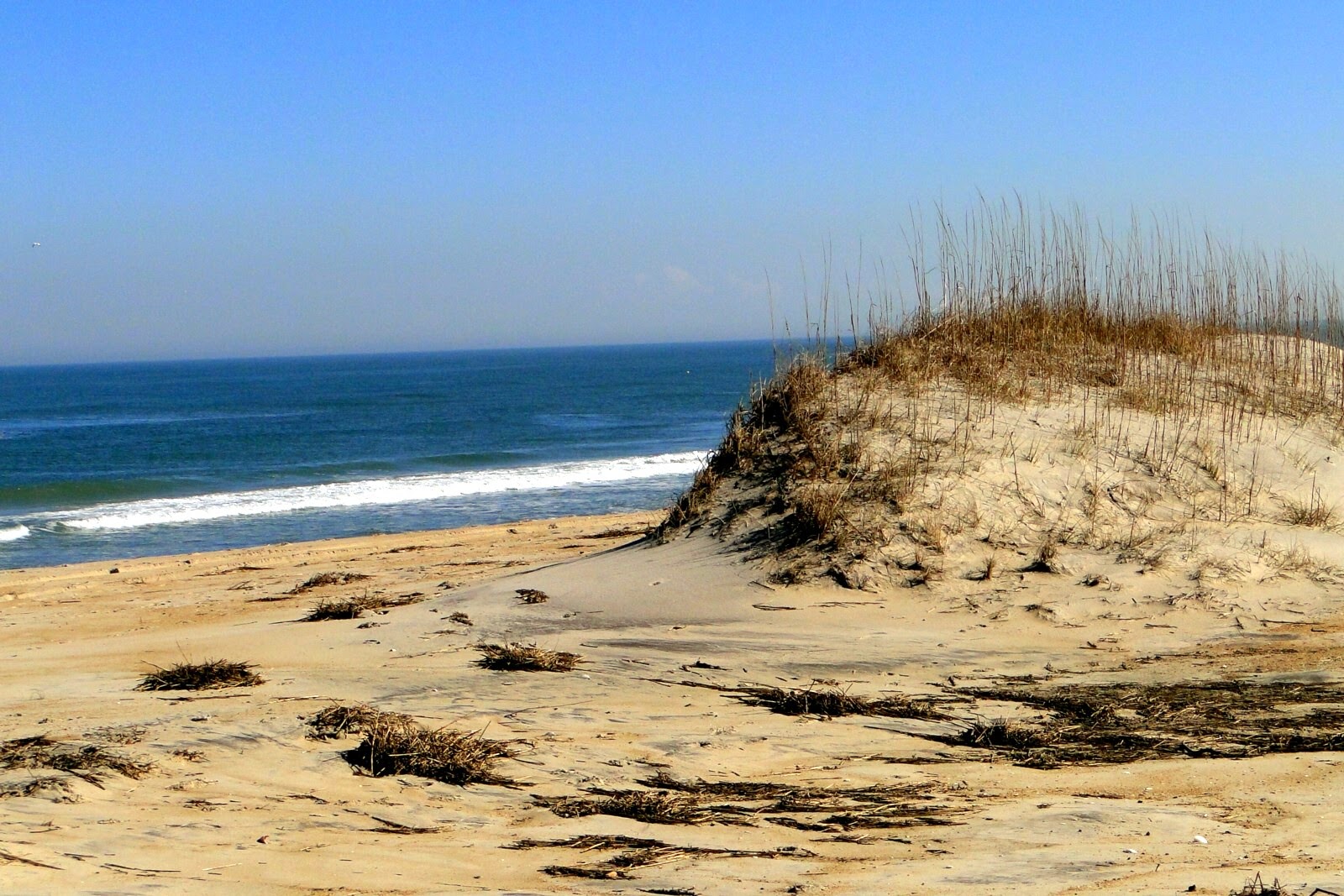 Afterwards, I drove south to Avon for supplies.  Along the way, I stopped at this pullout.  No one was on the beach.   As you can see, we have nice warm, sunny weather while we were down there. 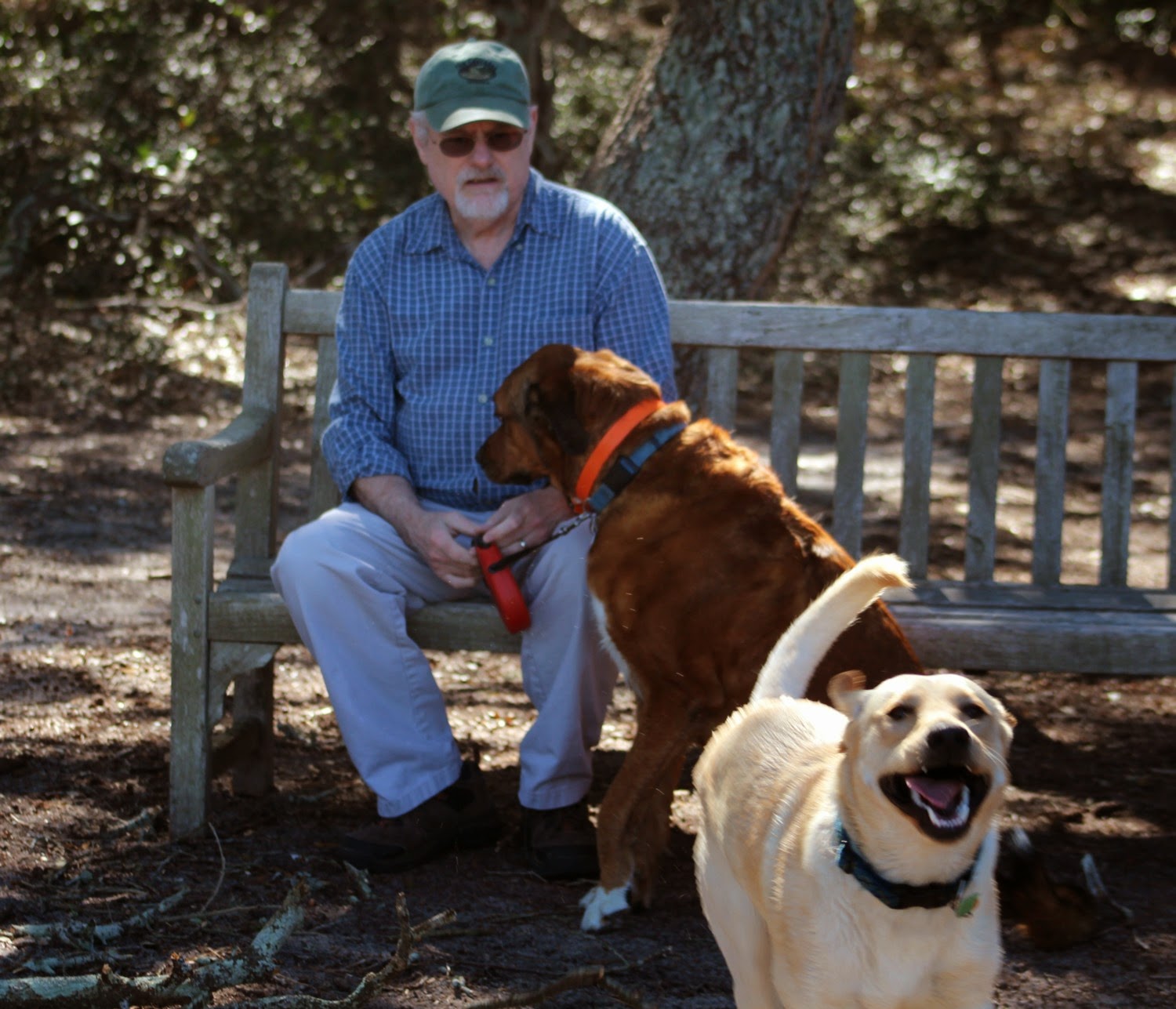 On our last day, we drove to Ft. Raleigh National Historic Site where we walked the nature trail.  This yellow lab followed us the whole time which made Kookie nervous.   Maybe she thought we were going to take the dog home! 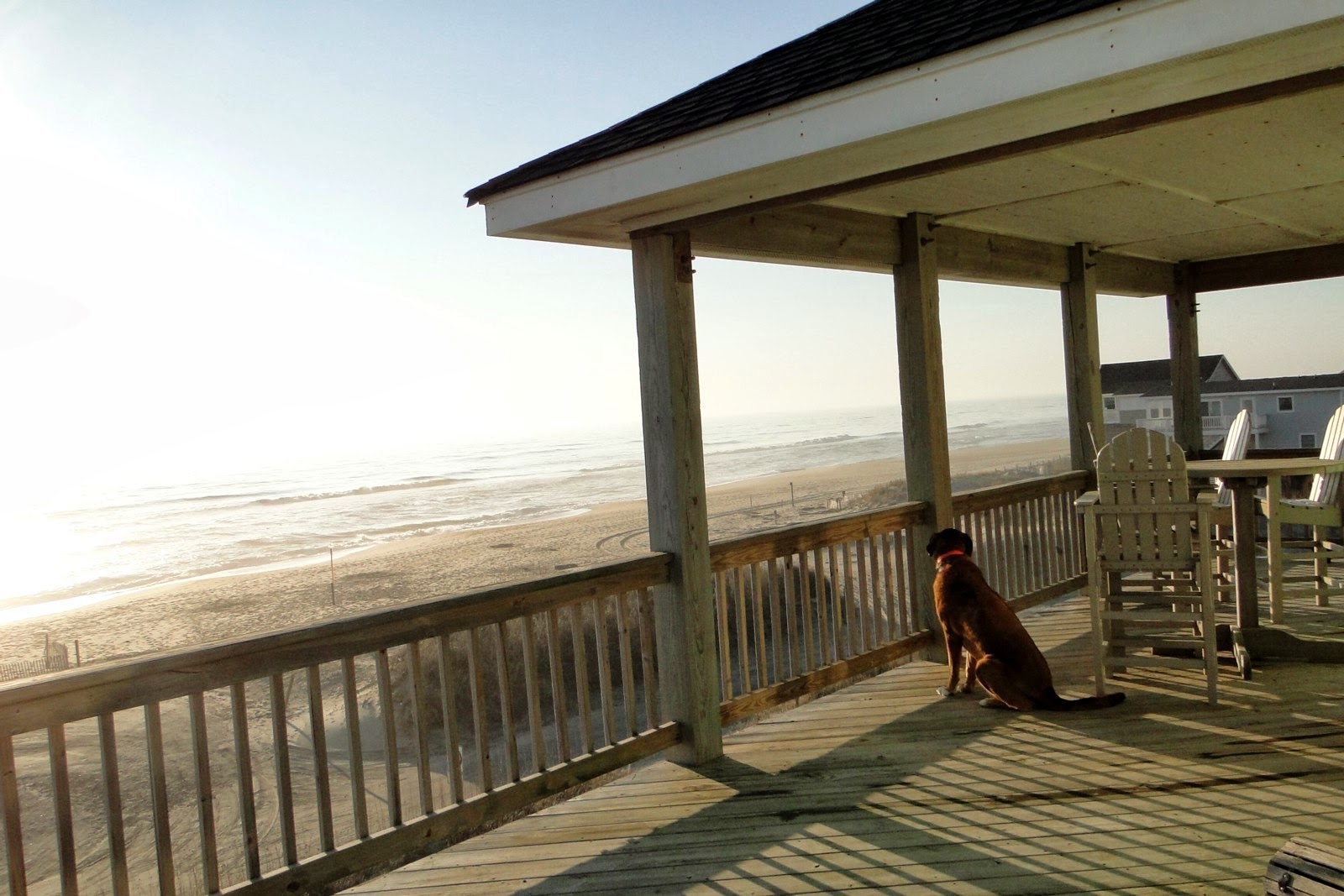 I really enjoyed the view from the top floor of  "Ocean Breeze" (for those who want to look it up on VRBO).   It was great to watch dolphins swim in the ocean.   Kookie enjoyed watching other people and dogs on the beach. 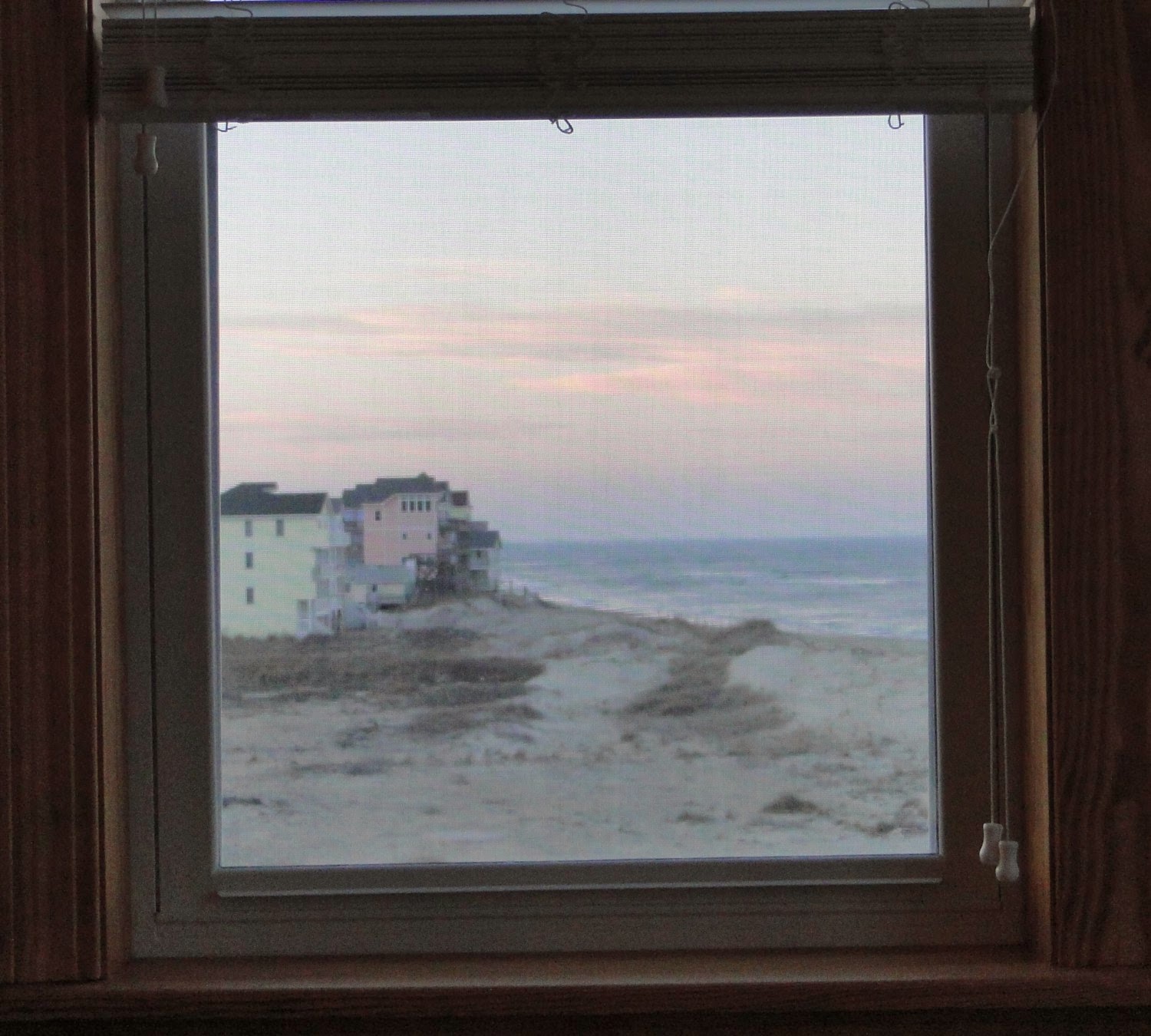 This view looking north was taken while seated in the recliner.   The screen makes it look like an oil painting.

We loved going to Hatteras in the off season.  All of our other trips (starting in the 80s) were in the summer when the crowds and mosquitoes were annoying.   Also, I saw more birds than people which was nice.

Next is our trip to St. George Island in Florida.
Posted by Appalachian Lady at 11:08 AM 4 comments:

Last week on one of the warm days, I went up on our land in the utility vehicle to collect manure for the garden.   On the way back, I took the old logging road through the woods.  All of a sudden a bird flew up in front of the vehicle.  I turned around to see an American Woodcock.... 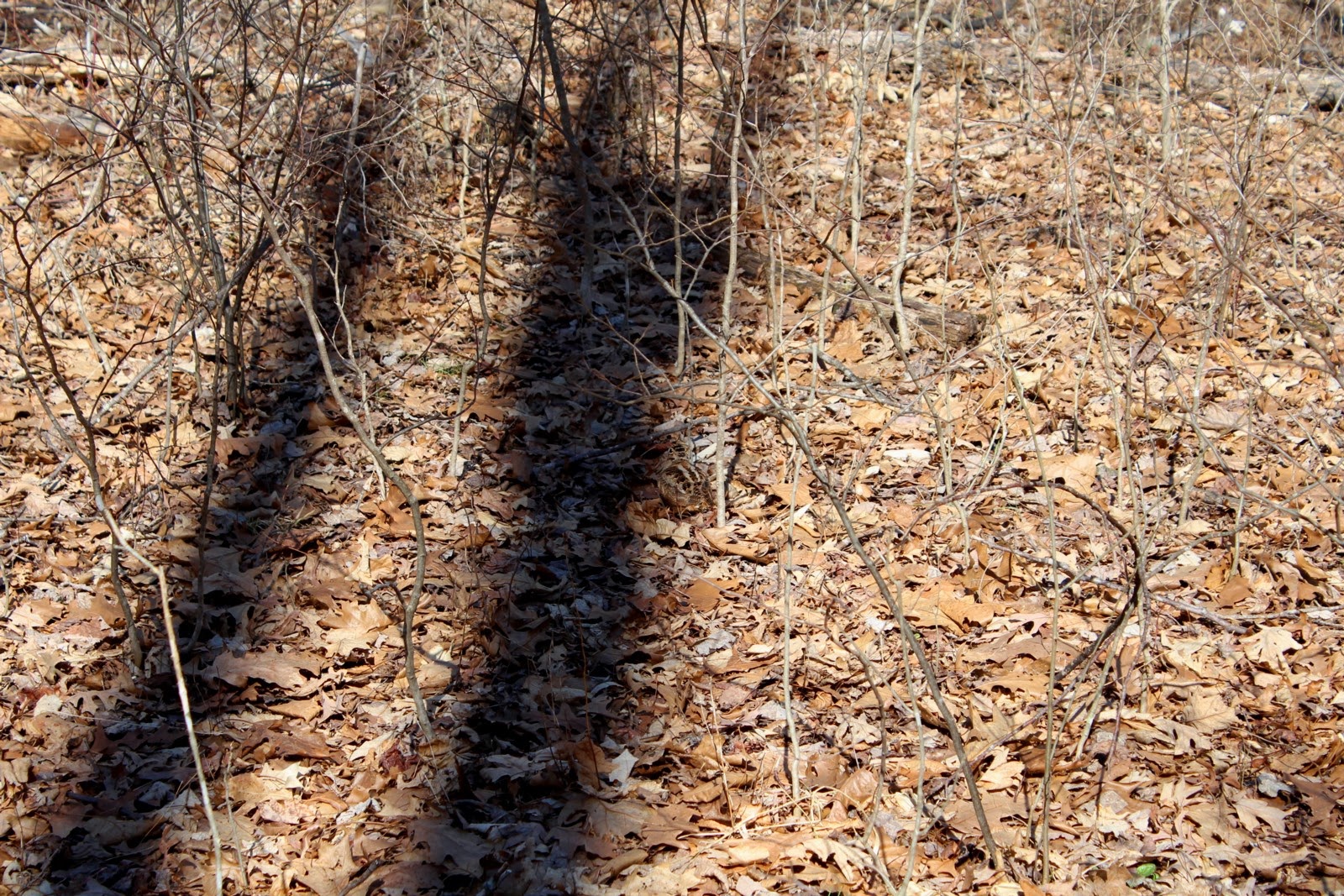 Can you see it, right there in the middle.  The only reason I was able to see him was that he was breathing so hard, I could see his chest heaving.   I cropped the photo below... 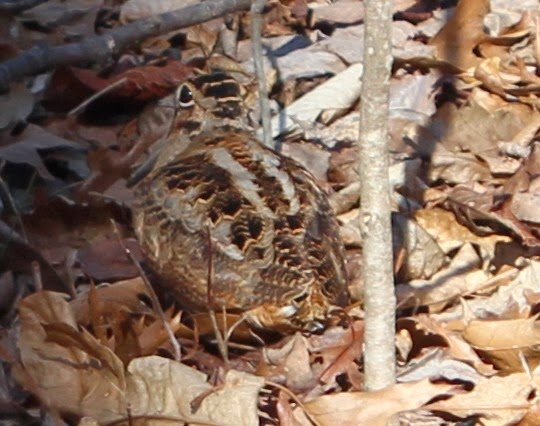 Not the best angle and I did not have the telephoto zoom lens but still I was excited to get a photo of him.  He sat there for awhile while I watched.   Then, Kookie, our dog, came back to check on me as she does when I stop.  I got out and held her by the collar.  The Woodcock slowly walked in the opposite direction and across the road.  I made Kookie get in the back and drove back to the house.

The woodcock will do his mating calls and courtship flights at dusk about now so I want to try walking in our woods by myself to catch this display.

The last time I saw a woodcock was in the late 80s when I was driving down our driveway early in the morning.  There was a woodcock right in the middle of the driveway, still for awhile until I got out of the car for a closer look.  I had to look it up then but this time I knew exactly what it was.