Nature has provided a bounty of blackberries this year as if to comfort us for the high food and gas prices. I have seen families picking them on the side of the road, taking advantage of the free wild food. 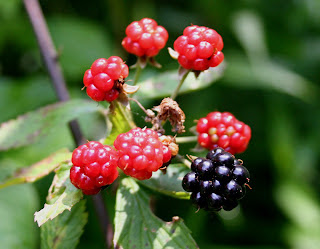 I picked them every few days when they started to ripen in early July (stashing a quart of them in the freezer a few minutes before we left on vacation on July 9). Since we returned July 19, I have been picking them every other day, using mostly for ice cream sauces and cobblers. I plan to make jelly soon to use the bounty I have stored in the fridge. 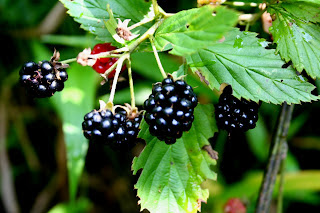 I don't worry about collecting them all because some fall while I pick them, letting whoever might come along (turtles, mice?) to feast as well. It is also impossible to get to many of the remote briars. So, the birds (Cardinals, Turkeys, Towhees) and insects (wasps, ants, bees) have plenty to eat.

Blackberries grow best in disturbed ground such as the edge of our field that was brushhogged two years ago. In our yard, I am letting the blackberries fill in at the edge of the lawn so we don't have to mow quite as much. 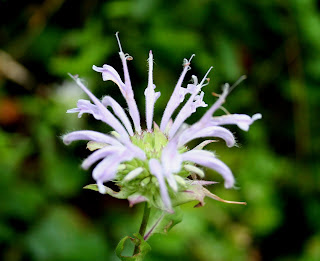 This Wild Bergamot (Monarda fistulosa) grew along with the blackberries in one patch. Like others in the mint family (bee balms, many herbs), it has a square stem. I fed some berries to this Box Turtle I found in the yard who seemed appreciative as he went on his way. I put the berries in front of him and left alone and he and the berries were gone about a half hour later. 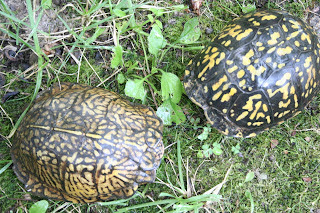 Later that same day, I found two more turtles in the yard. I am hoping to keep track of these over the years by taking their pictures. Each one seems to differ in size, color, and pattern so maybe I should name them too to help me remember.

I had worried about Box Turtles when I read a newspaper article that reported they were threatened and will probably go extinct someday because of loss of habitat. These turtles, however, looked healthy so I felt good about them. As long as it rains (not a given since we had the drought last year), these turtles should continue to prosper around here.
Posted by Appalachian Lady at 5:47 PM 5 comments: