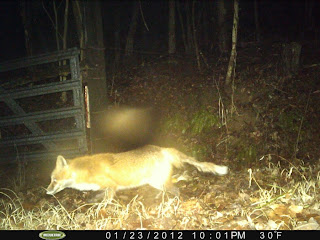 My husband gave me a wildlife camera for Christmas--so far, just photos of my dog and cats. But, I moved it to the driveway where it captured a photo of this red fox on Monday night. The lens appears to have raindrops on it. I think the fox was just as happy to get out after 3 days of rain. According to Eastern Forests, it is their mating season right now.

At first, I thought it was a coyote because of the color but red foxes go through a black and intermediary phase. Also, the fox has a white tip at the end of the tail as shown in my photo rather than black like a coyote. The fox carries its tail straight out, like in this photo, while the coyote carries its tail down while running or walking. I'm fairly sure of the identifcation of a fox after looking at this site:

Another thing that threw me off at first was the tail which is usually fluffy. This fox's tail looks like somebody got a good chunk of the fur resulting in it looking a little more like a coyote. The tail also might have been wet from all the rain. 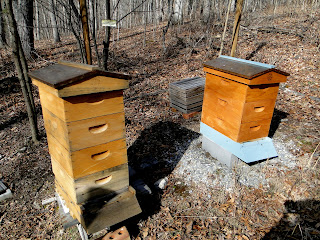 I was worried about my new "Duchess" hive because I hadn't seen the bees out on the many warmish days unlike the older "Princess" hive which had bees coming out on 50ish days. On Tuesday morning, it warmed up quickly to above 50 degrees and the new hive was just swarming with bees, so much so I thought it was being robbed. But, it wasn't. I saw some bees coming out yesterday as well.

I named my new hive "Duchess" partly after the name of the paint for the bottom board and top (Duchess Blue) and also because it was close to the royal wedding (May 2) when I got my nucleus hive. Then, "Princess" seemed like the right name for the older hive. I would like to restain and paint the older hive since the old hive is starting to show deterioration from 3 years of being out in the weather. 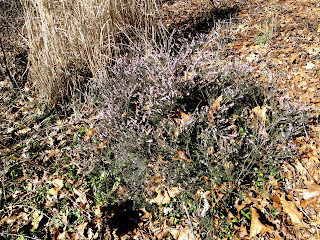 I saw a few bees on this heather which has been blooming for a month or more. 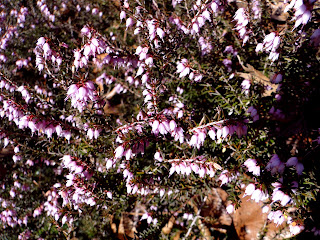 I am still amazed that it blooms in the winter, even with all the warm weather. I wish I had more than one heather shrub for the bees.

Yesterday, I cut back multi-flora rose, hoping to eventually kill it by starving its roots. I usually do this in late February or early March but I had noticed it was already starting to leaf out. It's been an unusually warm winter so far.
Posted by Appalachian Lady at 11:15 AM 9 comments:

We just got back from a quick trip to the Fort Myers area of Florida. Once again, I visited the Corkscrew Audubon Sanctuary. 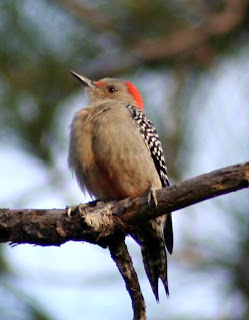 The red-bellied woodpeckers down in Florida are smaller than ours up north. This one appears to be a fledgling, maybe waiting for a meal. I saw the woodpeckers feeding on pine cones (no wonder birds liked my pine cone feeders) and berries.

This alligator was in Big Cypress Swamp Sanctuary but it was one of many I saw on the trip. I am very afraid of them even though the ranger told me I shouldn't be. She said you are ok if you don't get between alligators and the water or their babies. But, I had read in the paper the day we arrived about a 90 year old lady who was just standing in her yard when an alligator attacked her. A guy with a gun saved her but not before she lost her leg. After I got back from my trip, a friend old me that if an alligator chases you, make a sharp turn since alligators can't turn well. 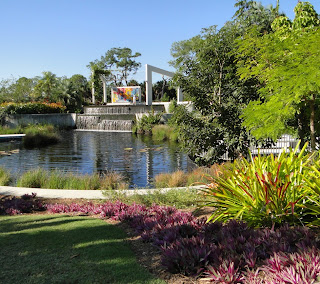 Naples Botanical Gardens was a nice surprise, very well designed with lots of interesting things for kids and adults. You can barely see the ceramic wall... 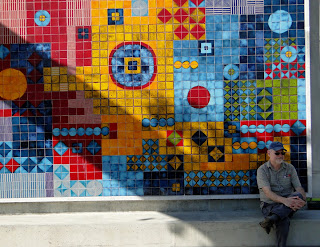 Here is a close up with my husband sitting there for scale as always. This makes me want to make a ceramic wall in my yard. I love the vibrant colors. 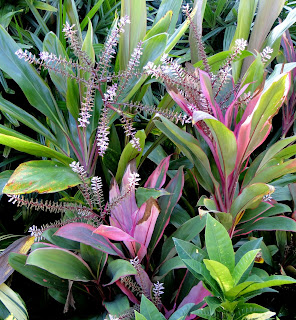 In contrast, this foliage had a softer color scheme. 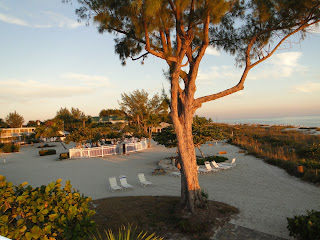 Our last couple days, we spent on Sanibel Island at Island Inn. This is a view from the sun deck from our guest lodge. I really liked the old beach feel of this place. 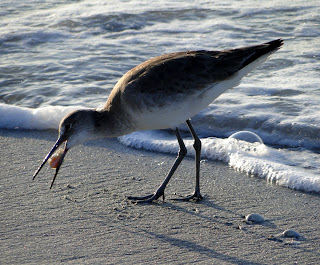 The beach wasn't too crowded with many shore birds. I don't know what kind of bird this is or what he's eating. I had watched him pluck it out of the water and then wade ashore. I hope it wasn't plastic. While I was on the island, I chased a plastic bag down to discard it. Plastic bags are so very bad around the water. Birds, turtles, and fishes mistake them for food, sometimes with tragic results. 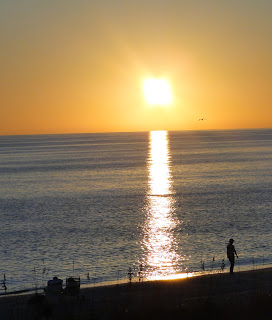 One advantage of of the gulf side of Florida is the great sunsets. There's even a pelican that was flying if you look very close. I wish I could have taken one of these sunsets home with me.
Posted by Appalachian Lady at 2:49 PM 9 comments: