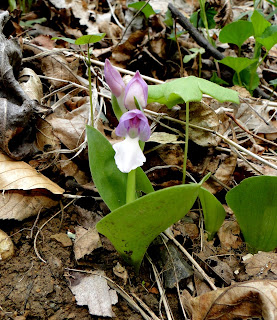 Yesterday, I was awakened to the wonderful sounds of a wood thrush at dawn. About an hour later, I walked down our driveway and heard oven birds. To cap a wonderful spring morning, I followed my friend's advice and looked intensely in one area for morels. When I stepped down a steep slope, I noticed an unusual color, at first thinking it was probably a phlox or violet flower. Right away, I knew it was an orchid. I quickly forgot about morel hunting. 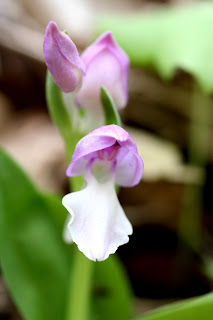 The species name "spectabilis" is Latin for spectacular--how appropriate! I can't believe I lived here for 27 years and have not seen this orchid before. But perhaps it finally bloomed for the first time after a long time:

Like other members of the Orchid family, it must have certain fungi present in the soil in order to survive. The seeds' outer shells are eaten by the fungi, while the seeds' inner parts obtain needed nourishment from the fungi. This relationship continues as the seed develops into a com, the bulblike underground part oa a flower stem where food is stored. The fungi delivers minerals and nutrients to the corn, which in turn provides the fungi with stubstances that the growing plant has produced through photosynthesis.
Leonard Atkins, Wildflowers of the Blue Ridge and Great Smoky Mountains

So far, this is only specimen I've found. I plan to protect it as much as I can.

What a glorious spring!
Posted by Appalachian Lady at 10:26 AM 10 comments: 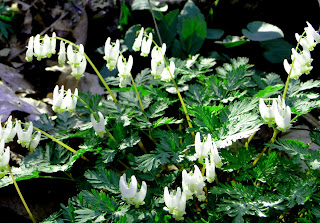 Last Thursday, I tagged along on a wildflower walk at Wildwood Park. Junior Naturalists (5th grade) were led by several of my Virginia Master Naturalist friends. 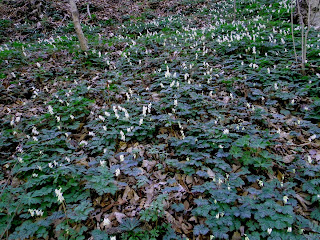 Dutchman's Breeches covered the steep hillside of the park which is right in the middle of the city of Radford, Virginia. I really would like to get some of these to put on my land so I'm looking for a source if you know of one.

It was good to see these children excited about wildflowers including wild ginger, bellwort, toothwort and bloodroot. Towards the end of the walk, I spotted one garlic mustard plant in the wildflowers and plucked it since I knew it could eventually take over. One girl asked me what it was and I explained about it being a very bad invasive plant. She wanted to know about it and so I explained how it smelled of garlic. The student asked me whether people ate it and I said that some people cooked it as a green. Then, she asked me if she could have it and I agreed as long as she destroyed it later. All the kids gathered around her and started tasting the leaves and laughing. That got the attention of the adults who scolded the kids for eating the plant. I was sorry I caused so much commotion. 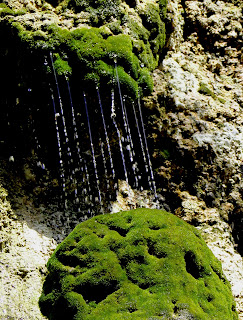 At the entrance to the park is a waterfall which formed over the old quarry limestone.

It was been unusually warm with temperatures in the mid-80s. I thought after all the rain I would try to find the elusive morel mushroom which I have been searching for on our land. 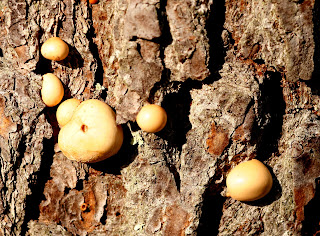 The only mushrooms I saw were these rather small puffball-like mushrooms on a dead Virginia pine tree. They weren't fresh either. Perhaps it's too early or we really don't have morels on our land.

Last Friday evening, I was watching TV and heard that there was a tornado warning for our county. The weather forecaster broke into scheduled broadcast and showed a scary radar screen. At that time, the storm was centered in Bland County but headed east for our county. A few minutes later, the severe storm took a detour south into Pulaski County instead of our way. The forecaster said it was likely a tornado as there was rotation. Two tornadoes touched down, destroying 400 structures. Miraculously, no one was hurt. Here's the Roanoke Times article. The tornadoes were the strongest on record for the New River Valley. In fact, tornadoes are rare because of the mountains. Last year, we had a 500 year flood so it makes me wonder why all this severe weather is happening. 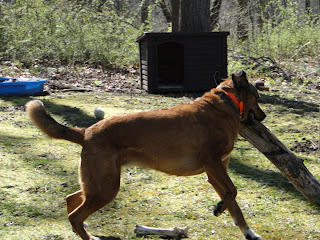 On a lighter note, my dog Kookie always cracks me up when she picks the biggest log in the outdoor fireplace to carry around the yard. She loves spring too!