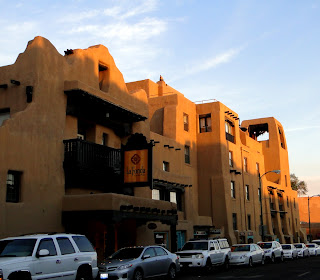 Almost two weeks ago, we went to Santa Fe, New Mexico. We flew into Albuquerque (more about the flight later) and stayed at La Fonda Hotel (above photo) on the town square in Santa Fe.   On several previous trips to Santa Fe over a span of 25 years, I walked through this historic hotel and hoped that I could stay there one day.  It's special because the interior was designed by Mary Colter and still retains much of the finishes and artwork that she personally supervised. 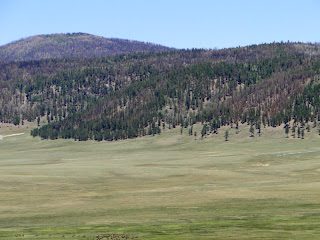 The next day we headed west on Highway 4 and stopped by the Valles Caldera National Preserve (89,000 acres) and  a major volcanic crater.  The photo above shows the valley of the crater.  If you look at the little dots at the bottom of the photo, you will see.....

a large elk herd drinking water out of the river that runs at the bottom of the crater.  It was so peaceful with few tourists.  Further, we saw pueblos with both adobe and mobile homes while most having outdoor clay ovens (would love to have one in my backyard!). 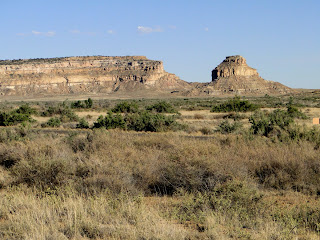 We arrived at Chaco late in the afternoon. It was hot! 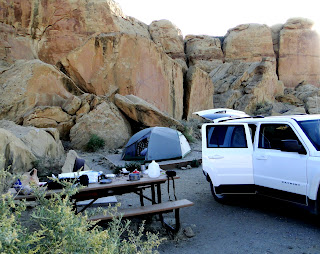 Steve put the tent up in the heat while I sat in the shade. 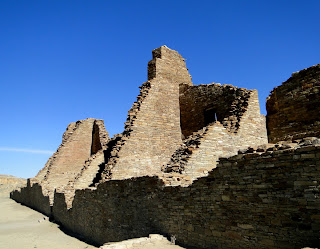 During the evening, we toured some of the ruins. 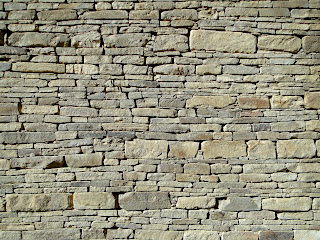 I admired the intricate masonry of the walls... 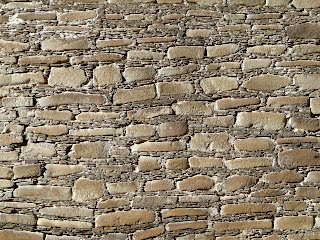 Here's another style---have never seen anything quite like it today.

By the time I fixed dinner and did the dishes, it was very dark but cool.  Steve enjoyed seeing the moon rise over the canyon. 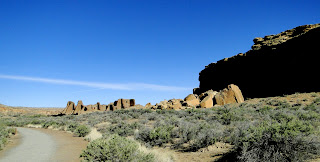 We saved the Pueblo Bonita for the morning.   This complex was begun in the 800s and then grew to over 600 rooms by the 1200s according to our Moon New Mexico handbook. 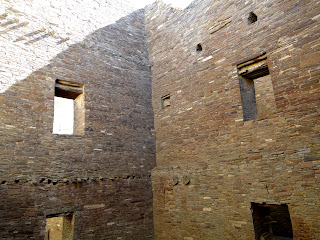 It's hard to imagine that the walls went up 5 floors.  In this photo you can see where part of the old wooden joists protrude in the walls indicating another floor.

This panoramic view was taken from Pueblo Bonita of the surrounding canyon. After this short trail (.6 mile), we were back on the road heading east before the temperatures rose. 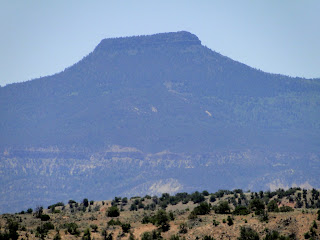 On the way we drove through Georgia O'Keefe country where I took this photo of Padernal Peak, a mountain the artist painted many times.

We tried to camp but couldn't really find any place in the state or national forests to our liking.  So, we set our GPS to an address of a little hotel in Taos... 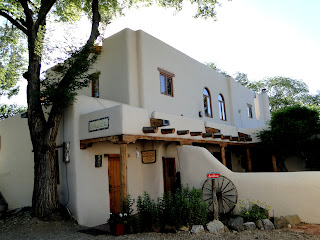 It turned out to be La Posado de Taos, the first bed and breakfast we have ever stayed in. The room was great with a fireplace and whirpool tub.  The manager said that the house was once an artist's home.  She said she grew up in Santa Fe but moved to Taos which she thought was the Santa Fe of  her childhood.  I realized when talking to her, I didn't know much about the many other artists who first made Santa Fe and Taos their home (something I remedied later).  The B&B was one block off the square so we walked there and found it was full of people attending a concert sponsored by the Chamber of Commerce.

The next day we went to Bandelier National Monument where Steve once again set up camp.  He hiked to the ruins by himself while I took the shuttle.   Most of Bandelier burned last year but not the ruins.  However the parking lot was damaged from flooding (due to the loss of trees) so that's why visitors are shuttled in.  The campground host said that visitation is way down, probably only 20% of what it was before the fire. 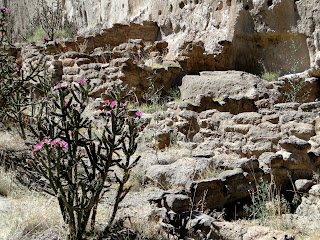 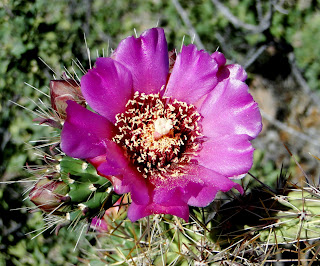 The cholla were blooming .... 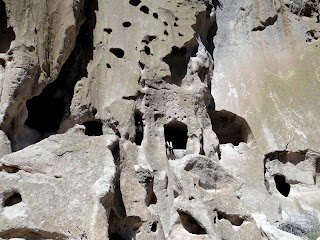 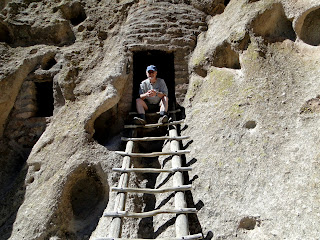 The ruins were very hot because it was 2:00 in the afternoon.  I was fine until I splashed water on my face and legs.  It felt cool for about a minute then unbearably hot. I was glad to get back to the campground. 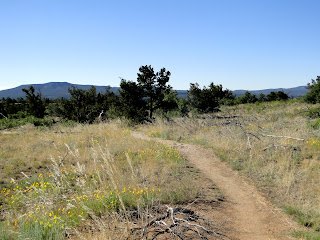 Early the next morning we went on a hike from the campground to.... 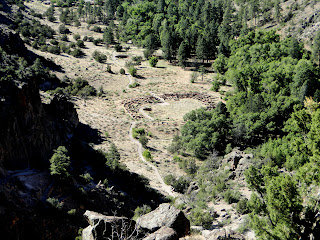 an overlook of the Bandelier ruins we had climbed on the day before.  After the hike, we headed back to Santa Fe where I visited museums.

I had been to the Georgia O'Keefe museum several times before to see their permanent collection, but the current exhibit "Georgia O'Keefe and the Faraway: Nature and Image" really intrigued me.  It included a setup of her campsite (complete with sterno stove, cookware, tent, and lantern), photos from her canyon visits, journals, and letters she wrote back to Stieglitz about her nature walks and trips.

I also visited the New Mexico Museum of Art which prompted me to buy and read Artists of the Canyons & Caminos by Edna Robertson and Sarah Nestor which covers the history of  the early artists who came to Santa Fe.  The museum was built in 1917 but previously housed in the Palace of the Governors (now the history museum).    In some ways, the rise of Santa Fe as an artists' haven in the late 19th century was by accident.  Most of the early artists came to a local sanatorium for tuberculosis.  Once cured, they stayed with the assistance of the museum who provided free studio space and locals who often gave them free housing and services in exchange for artwork.   Later some built adobe houses by hand and rented to tourists during the summer while the artists slept in tents. 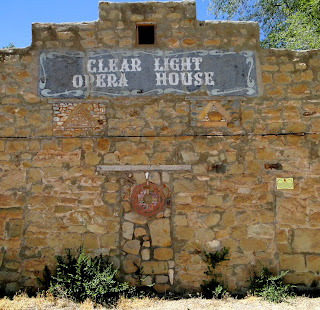 On the way back to Albuquerque, we stopped in Cerrillos, mostly a ghost town.  This facade of the opera house (now used as storage)  is a long cry from when Sarah Bernhardt performed when the town was booming from turquoise mining in the 1890s.

Note on the New Mexico Fires....

I read today that tourists were beginning to avoid New Mexico because of the forest fires.  On our flight from Phoenix to Albuquerque, we did the see the huge Gila fire which must have been 100 miles away.  On our drive to Santa Fe, we saw another forest fire.  Yet, the fires did not bother us.  In fact, we enjoyed seeing Bandelier without all the crowds.  So, please don't avoid New Mexico. It truly is the land of enchantment!

Posted by Appalachian Lady at 11:10 AM 9 comments: 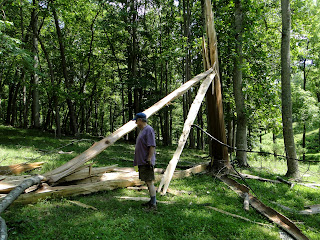 Yesterday, our neighbor told us we had a tree struck by lightning on the back part of our land.  He said he had never seen anything like it.  We agreed.  The bark was stripped completely off the yellow poplar tree.  Large slabs of the tree were everywhere. 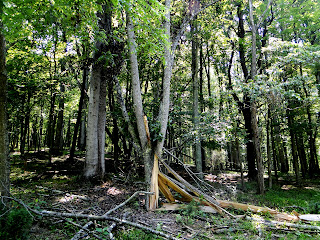 This is the top of the tree which landed about 30 feet away.  At first, I thought it was another tree because it sat vertically in the ground.

Nature continues to amaze me.
Posted by Appalachian Lady at 9:12 AM 5 comments: