3.6 Inches of Rain in 30 minutes does some damage! 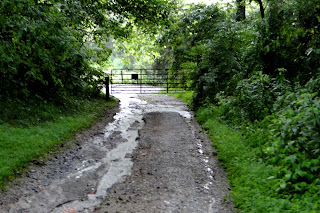 Last evening, a severe thunderstorm dumped almost 3.6 inches of rain in about 30 minutes.  About an hour later, I saw there was a creek going down the driveway. 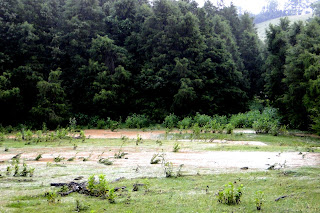 In the valley across from our driveway, the creek was all over the pasture. 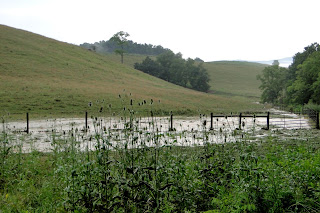 This creek usually dries up in July but not this year.  It has been running all summer. 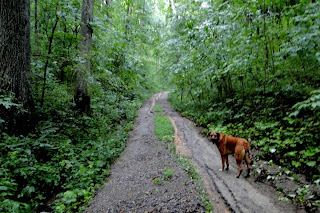 Our dog Kookie does not like rain but loves to walk in the puddles afterwards.

While our driveway was a mess, the woods just soaked up all the rain easily.   I heard wood thrushes just like usual.  So, I posted this video of one wood thrush I had recorded last week.

While getting supplies for camping in Moab, I mentioned to the clerk that we had 5 inches of rain in a week at our home in the Appalachian Mountains.  The clerk looked dejected when she said that they hadn't had that much so far this year.  Indeed, I read that Moab had 3 inches of rain by the end of June in 2013, double what they had last year.

Our trip started off though in the Wasatch Mountains. I booked two nights at the Sundance Ski Resort, a place I always wanted to visit and it's somewhat affordable in the summer.  I have always been a fan of Redford and even saw him in person when I lived in Logan, Utah in the 1970s. 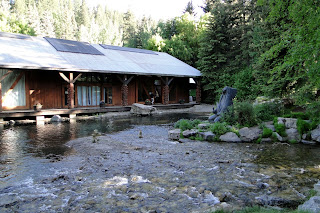 Most of the buildings are rustic but we were unable to go insidemany of the ones used for the Sundance Institute.  That was a disappointment but the restaurants, bar, art gallery, and shops were open. 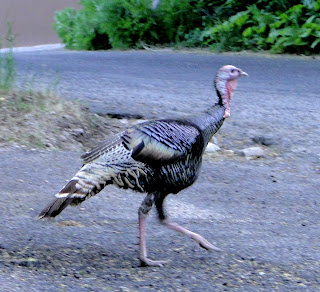 This wild turkey was grazing in front of our room and walked across the road when too many people were around. 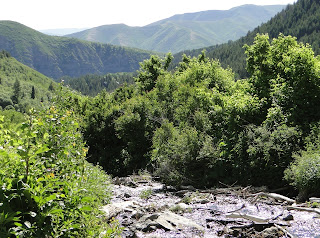 My favorite part of our stay here was the hike to Stewart's Falls, supposedly one of the many locations for the Redford film, Jeremiah Johnson.  At the time it was already Redford's land but he continued to  buy up land, keeping the ski resort, but also putting some of the land under conservation easement (guess I have something in common with Redford since we have a conservation easement as well). 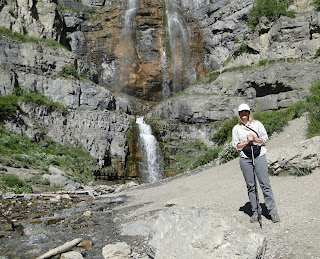 The falls cascade down and are on the edge of Mt. Timpanogos Wilderness, an area we explored later by car that day and returned to at the end of our trip.

The 3-hour drive to Canyonlands was uneventful except for the terrible rest area (the worst outhouse I have other seen!).   We camped at theWillow Flat campground which did not fill up the whole time we were there. 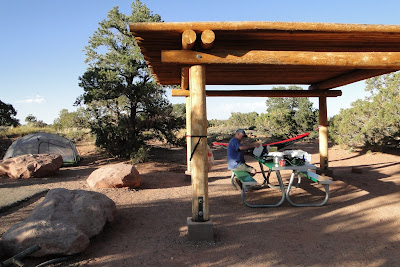 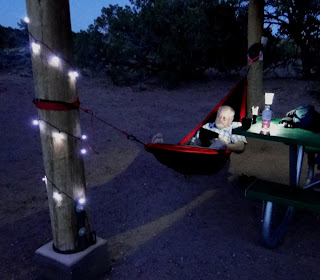 Steve bought  a camping hammock and solar lights at the local outdoors store and both fit nicely on the ramada.   The evenings cooled down, one advantage of the high (5000 feet elevation) desert. 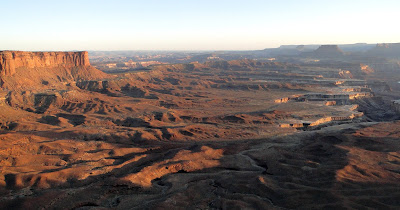 This overlook of the Green River was walking distance (1/4 mile) from our campsite. 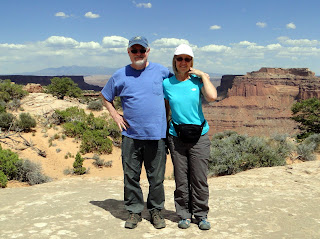 This is the only couple photo of the trip, taken right across from the Canyonlands Visitor Center. 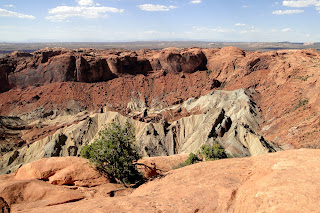 We did the short hike to the Upheaval Dome.  No one seems to know how the dome was formed but it reminded me of the one at Mt. Helens.

We did the hike on Grand View Point, retracing the steps of Edward Abbey when he looked for a missing hiker as he wrote in his book Desert Solitaire.   The hiker was found dead by his brother under a juniper tree looking out at the grand view.  Abbey wrote that he thought it was great place to die. 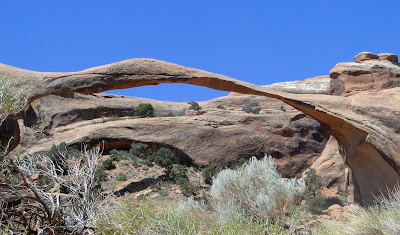 After two days of camping at Canyonlands, we went to Arches National Park where we saw hordes of visitors, including along this hike to Landscape Arch.  Part of the arch fell in the 90s so it looks like it won't be here much longer looking at how thin it is.   The hike was fine (about 2-1/2 miles because we had to park so far from the trailhead) until the last 1/4 mile when a sandstorm hit.   I had to protect my face and glasses from the sand (wishing I had one of those hankerchiefs they sold in the Visitor Center). 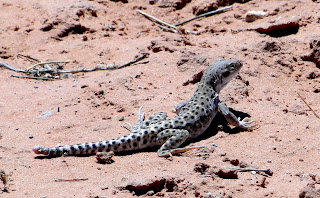 On the way back to the car, this lizard? (about one foot long) scurried along the ground in the 95+ temperatures.  I couldn't identify this in any of my guides so I appreciate anyone who knows what it is. 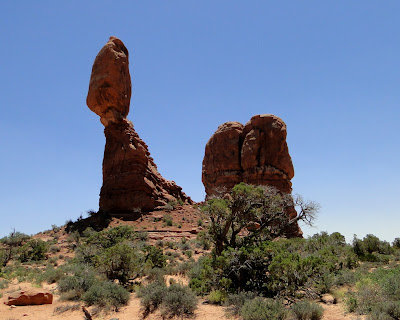 When Edward Abbey was ranger here in the 1950s, his trailer was parked near Balanced Rock, photographed here.  That's when all the roads were dirt and there were few visitors, quite a contrast from today.

After a night's stay in Moab at the Gonzo Inn, we headed back to the cool mountains above Sundance.  We camped at Timpooneke campground where it got down into the 40s at night.   We arrived there early on Thursday, June 20, a good thing since the campground filled up quickly. 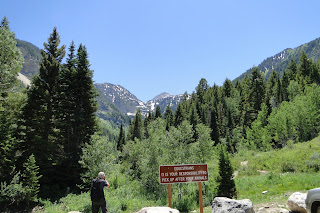 We hiked up to Scout Falls, just on the other side of Stewart's Falls in the Mount Timpanogos Wilderness area.  Of course, I forgot to put the battery back into my camera after getting it charged at the hotel!

The next day, we drove out Rt. 114 in the Uinta National Forest, stopping here at the Deer Creek Overlook. 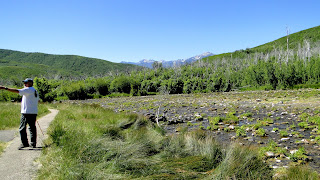 Our destination was the Cascade Springs, a unique geological area.  This photo shows where the water comes out of the ground from the surrounding mountains. 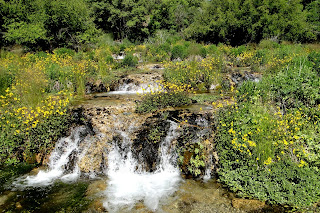 The water then flows over limestone rocks, making many waterfalls.  We met a lady who said she visited as a child (and was now 57 years old).  She said it was exactly like she remembered with all the waterfalls and the board walks which protected the sensitive area. 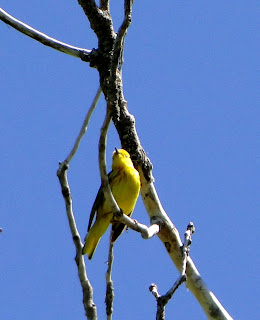 I spotted this Yellow Warbler in one of the dead trees.  This area would be especially good for birders as would many of the mountain valleys.

Since we returned from Utah, we have received another 4 inches of rain.  I just wish we could ship it out to Utah!
Posted by Appalachian Lady at 1:08 PM 5 comments:

In June, we made a hike along the war spur trail which is off the Appalachian Trail near Mountain Lake Lodge. The ferns were taller than usual, probably because of all the rain. 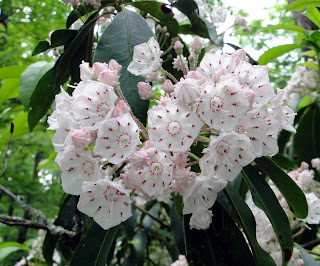 Mountain Laurel shrubs were in bloom... 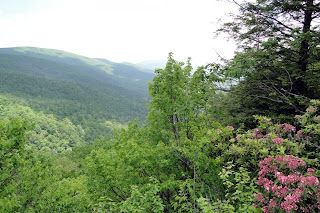 The view is always worth the hike. 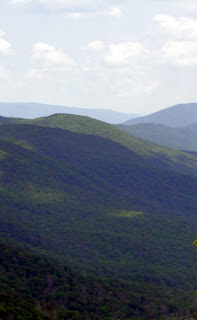 This cropped view shows how green the mountains are this year.    We took this hike less than a week before our Utah vacation which is my next post....
Posted by Appalachian Lady at 12:04 PM 1 comment: