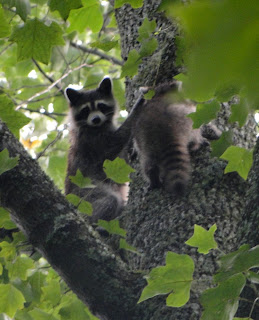 I was glad to see July end.  Like everywhere else, it was just too darn hot--record high for Virginia.  I did get out a little bit in the evenings after the sun went down behind the trees.  The photo above was taken on July 20 when I took my dog on a walk.  For some reason, the dog missed the mother and 2 baby raccoons in the cove while I heard them scramble up the poplar tree.  The mother looked down at me while she put her paw on the younger ones to go up the tree.  They climbed 80 feet up into the canopy and couldn't be seen.

Here are some other photos of late summer.... 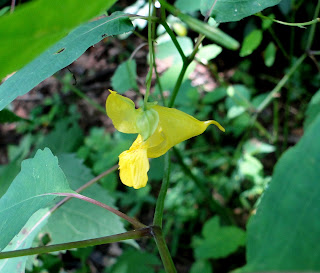 The jewelweed that grows along our driveway is yellow while those plants along the creek down the road are orange. 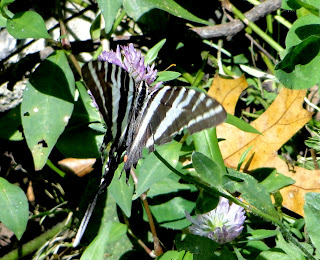 I was thrilled to see this zebra swallowtail, very unusual for our yard.  There must be a pawpaw tree around somewhere because that is its host plant. 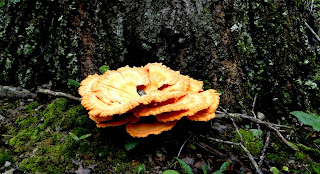 I found this huge chicken? mushroom at the base of a large red oak tree on August 7. 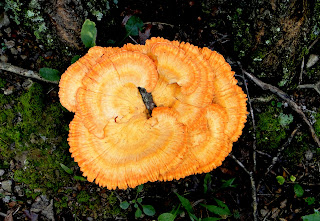 Here is another look from above. I love the orange color. 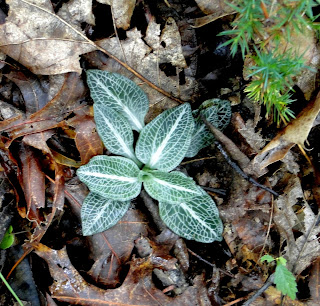 This Rattlesnake Plantain is an orchid that some folks dig up for terrariums.  But, I would never do that since there aren't that many of them in the woods.   It will send up a single stalk with little white flowers later this month or September.

The first half of August has been what I expected--highs in the lower 80s with cool nights (50s).  That keeps our house cool all day.  August can stay as long as it likes!
Posted by Appalachian Lady at 10:17 AM 8 comments: