Today, it's cold (30s) and mostly cloudy--good for writing a post.

Yesterday, the wind was so strong and the temperature was dropping so quickly that I did my nature watching, the easy way, by looking out the windows. 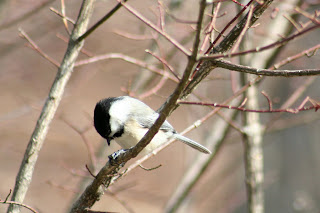 This Carolina Chickadee is using the branch to open up a sunflower seed. The Black-capped and Carolina Chickadees are supposed to interbreed in this region so I identify ours by their song which is definitely that of the Carolina Chickadee. They also seem quite a bit smaller than those I have seen up north in New York. I had read that maybe that's just an adaptation to cold. 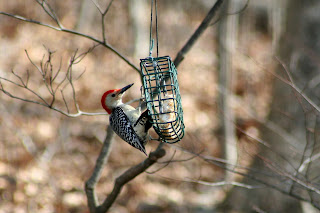 The Red-bellied Woodpecker rules at the suet feeder. Even the Blue Jay won't challenge this bird--guess he's afraid of that long beak. 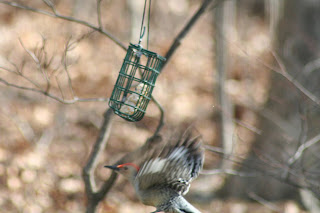 Here's one I caught in flight. 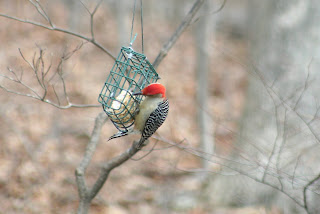 Here you can see a little bit of the red belly which gives the woodpecker its name.

A few years ago, I was able to observe some Red-bellied Woodpeckers in southern Florida (near Ft. Meyers) about this time of year. They seemed quite a bit smaller than the ones we have here. Similar to the Chickadees, the woodpeckers up north are larger to adapt to the cold. The larger the bird, the easier they can keep their bodies warm. But, I guess there is a trade-off--they must eat more food to keep warm. Of course, that doesn't seem to be a problem around here because I keep the suet feeders full all winter.
Posted by Appalachian Lady at 10:41 AM 8 comments:

On my drive to town, I pass by Walker Creek, some would say a river that drains into the New River. For the past couple of weeks, I have seen a pair of ducks. Every time I get out of the car though, they would fly away. On Monday, I was able to take a picture through the car window. 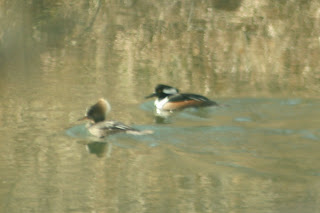 They appear to be a male (on right) and female Hooded Merganser. According to my field guide, these ducks live here year round.

Yesterday was another unusually warm day with temperatures in the high 60s. I went up to our big pasture to collect cow manure for my garden. I often see Red-tailed Hawks soaring above the hill in the pasture and yesterday was no exception. 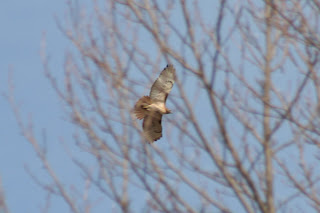 I had to focus and shoot at the same time to get pictures. Probably the clearest shot was this one behind a tree. You can see the broad, red tail and the wide wings. 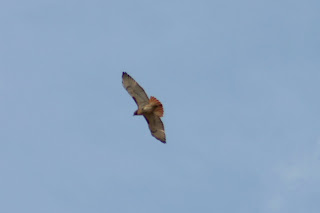 The Red-tailed Hawk is very common around here--especially along roads. I also saw a pair yesterday near our house, appearing to be scoping out the bird feeders.

Finally, I took a picture of a Blue Jay's nest. 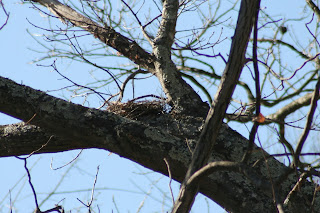 The nest is quite large, about 10 inches in diameter, and located on a strong oak limb. I remembered that I had written about it in my paper journal last year:

"Last evening, I noticed Blue Jays just starting to make a nest in the big oak tree in front of the house. By 11:00 a.m. today, it looks like the nest is finished already. "

"At 2:30 p.m., I heard the Blue Jays fussing, a little louder than usual. Out front in the oak tree where the nest is, I heard and saw two Blue Jays calling, then four more came to the tree. That's when I saw an American Crow going toward the nest. All six Blue Jays attacked and steered the crow away. The crow flew away. The way the Blue Jays worked together to chase the crow away was impressive!"

I admired the Blue Jays a little more then. So, I won't get so mad at them when they try stealing eggs from the Wood Thrush nests which causes a similar commotion.

This morning, I pulled the bark off of a log and found 5 larvae or grubs. Immediately, I gathered up the grubs and placed them below our Carolina Wren's winter home, a clay birdhouse on our front porch that the wrens have used for many years. I remembered that I had taken some video of her and her chicks last summer. Of course, it might not be the same one but I like to think it is.

The video captures just a little of the bedlam of the chicks leaving the nest. First, both the mother and father call to the chicks for a couple of days. Once out of the nest, the chicks and parents make a big rackett, jumping all around, some looking like they are practicing flying. The chicks are hesitant to make the leap from the porch (about 10 feet off the ground) but the mother or father entices the fledgings with a juicy bug. One by one, they fly off until the last one who must have been the most scared.

After the last chick makes his leap flying into the woods below, there is complete silence. I feel the "empty nest" syndrome, missing the chirps of the baby birds.

About , I watched the wren eat the grubs and then look around on the front porch for some more. Guess I will keep pulling off the bark of the logs to look for grubs for her this winter. With the sunflower seeds and suet cakes we provide for the birds, I believe she has it made.