On a stormy day at Mountain Lake Hotel, I am demonstrating how to do a post on my nature blog as part of my presentation on nature journals to the Elderhostel "Natural History of Appalachia's Mountain Lake." 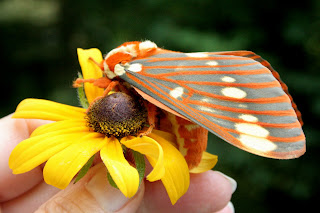 Yesterday, my husband found a Regal Moth (Citheronia regalis) at the bottom of the driveway. He thought it was dying so he brought it up to the house. I was amazed at the size and beauty of this moth and wanted to learn more (which I did from Wikipedia). 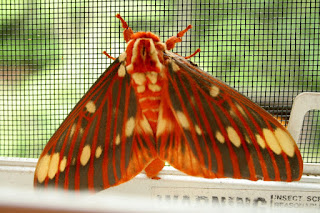 I let the moth climb onto the insect screen where she would be safe from my cat. I think she is a female since she doesn't have any antennae which the male has. Later during the day, the moth started pumping her wings, perhaps to release pheromones that the male detects through "its large, plumose antennae."

That evening, I reluctantly decided I shouldn't keep her since I didn't think she was dying. I put her on a hickory tree close to our house. The next morning, she was gone. I am hoping she will lay eggs during her brief life (only one week). The eggs will hatch in about a week to 10 days, with the small caterpillars feasting at night on our many hickories. As the caterpillars age and become larger, they will feed during the day. The large caterpillar's common name is the "Hickory Horned Devil"--referring to the huge red horns on their heads but the caterpillar is harmless and can be handled. The caterpillar will pupate and then reside in the soil over winter, hopefully to emerge next summer if the weather is just right, somewhat hot and humid as it has been lately.

The Regal Moth has become rare further north which may be related to the use of pesticides to control the Gypsy Moth. I found this disturbing. I see the helicopters spraying pesticide on the mountains, including Mountain Lake. It doesn't seem to be doing much good--the Gypsy Moths march on. I am still hoping they won't reach our land because we are surrounded somewhat by farm pastures and the female Gypsy Moth doesn't fly so their spread is mostly tree by tree. If they do come, I don't think I want to have pesticides sprayed on our land. Perhaps the Gypsy Moths will only eat the oaks and not the hickories and walnuts so they can be left for the beautiful Regal Moth. At least, by not spraying, the Regal and other native moths that have caterpillars at the same time as the gypsies would have a chance.

Note: Information for this post came from the Regal Moth page on Wikipedia . 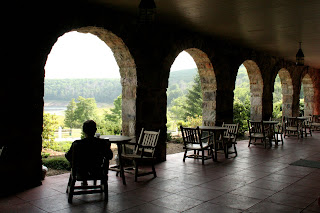 After my presentation, I learned that the British reality show "Dirty Dancing" was taping the semi-finals competition that afternoon. Some last minute audience cancellations allowed me to go! I was glad I did. The "Johnny and Baby" dancers were great. Also, it was very interesting to see how they produce a television show. The show filmed here last year and was a top hit in Great Britain so they returned this summer. Too bad we don't get British TV but the rumor is that MTV will produce the series here for a US audience so that's exciting. I know this has nothing to do with nature but I wanted to share my exciting day!

Posted by Appalachian Lady at 9:30 AM 10 comments: 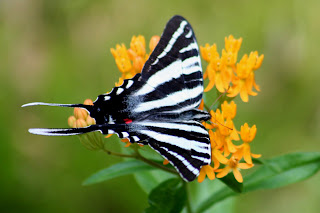 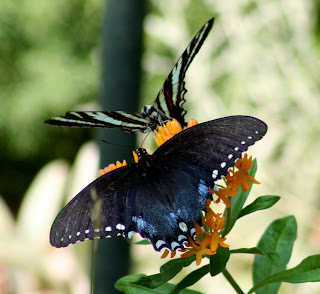 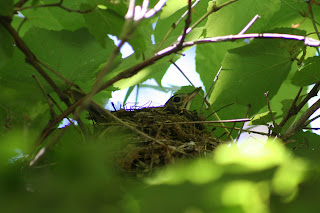 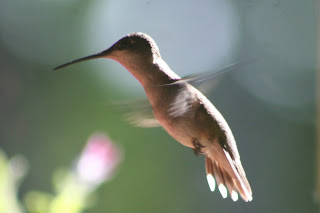 I caught this hummer in flight as she fought with the others for a place at the feeder. I have been filling up the feeder once a day because the hummers are sucking it dry. Previously, there was a lull at the feeders of about two weeks when the Japanese honeysuckle was in bloom.
Posted by Appalachian Lady at 12:38 PM 12 comments:

The past two weeks have been hot and sticky with the exception of the last couple of days. A cool front today should really make a nice day. Rain has been intermittent but very light--we could use more.

Every year, I look forward to seeing the Butterfly Weed bloom. The ones in my yard bloom first followed by those along the road side and in my old pasture. 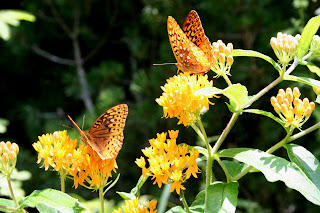 This photograph shows why it is named Butterfly Weed! In the same family as Common Milkweed, this plant blooms for almost a month attracting many butterflies (as well as caterpillars). Right now, there seems to be an abundance of Great Spangled Fritillary. This butterfly caterpillar feeds on violets which were also in abundance this year. 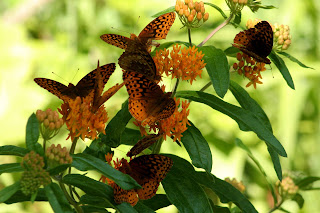 Later during the day, I counted 9 butterflies on the plant when it was in the shade. Several flew away before I could take this shot. 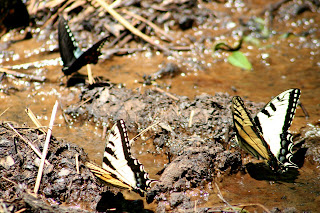 A couple of weeks ago, I noticed another group of butterflies--Black and Tiger Swallowtails feasting on donkey manure after a rain. Of course, most flew off before I could get this picture. I didn't post it then thinking donkey manure and butterflies aren't that much for a post.


Recently, a group of caterpillars caught my attention because of their fierce appearance. I haven't been able to identify the tree they are on. The tree was part of a group of seedlings (10 of which only 3 survived) received from the Arbor Day Foundation. 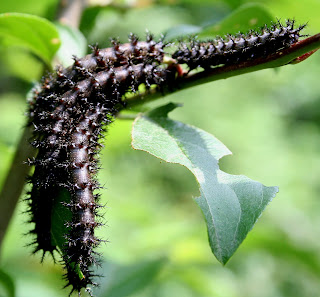 They were feeding together for awhile. A few minutes later (I confess I touched a couple with a twig), they moved in single file down the tree to another leaf where they fed. They didn't eat very many leaves so I left them alone. 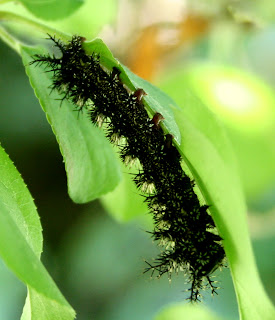 Four days later, I noticed only one caterpillar on the tree--a little bigger and the branched spines a little longer. My best guess is that these are Buck Moth (Hermileuca maia) caterpillars. The government publication Caterpillars of Eastern Forests states that they are "gregarious in early instars" so that might explain why I saw them in a group first. Good thing I didn't touch them with my fingers because the guide warns that "Spines inflict painful sting followed by swelling." The guide also states they prefer oaks but will feed on a variety of shrubs and trees.

If anyone has a better idea of what these caterpillars are, let me know.
Posted by Appalachian Lady at 11:09 AM 8 comments:

My Promise to Wood Thrushes

The weather has been intermittently rainy for the past week. As I walked down our driveway this morning, the woods were steamy as the temperature began to climb quickly.

Almost every day, I look for wood thrush nests. 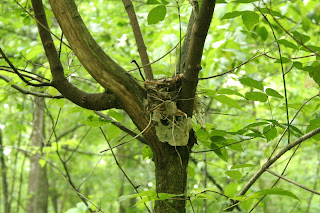 This nest looks very much like what a Wood Thrush would make. It's new this year but I have not seen any bird on the nest. The nest is right next to the driveway and very exposed so I am wondering if the Wood Thrush changed his mind. 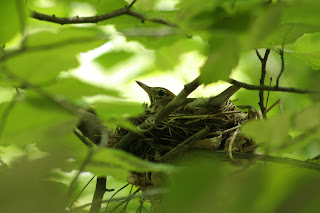 About 25 feet from this nest is this one where a female Wood Thrush has been incubating the eggs for over a week now. This nest is well hidden in a Witch Hazel, a common understory tree here. One evening I saw the male sitting right next to the female on the nest, perfectly still as I approached (the photo came out too blurry to post). Could the male have built the empty nest as a decoy?

While I was photographing the empty nest above, a couple of birds landed on a branch nearby. I first thought they were goldfinches but no, they were a pair of Hooded Warblers! I thought I had seen them before but this time, I knew for sure that's what they were. They called but then left after a minute before I could photograph them. I don't think they were the ones that made the empty nest. I also have seen the Worm-eating Warbler near this same spot.

The Wood Thrush on the nest looks so innocent and fragile that I want to protect her from the Blue Jays who might steal her eggs or the Cow Bird who might lay an egg in her nest. The baby cowbird would muscle out the others.

My husband and I have probably done the best to protect wood thrushes and other forest-dwelling birds by putting a conservation easement on our land. 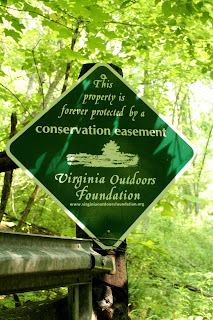 Every time I pass by our easement sign, I remember that this land (79 acres of the 83 we own) is protected forever from development which poses the most threats to wildlife. The warblers, ovenbirds, tanagers, and barred owls will always have a home here. So too does the box turtle which probably is the most threatened on our land. To be sure, we benefit from the easement as well. We received tax credits and we still can enjoy our land until the time when we must move someday--hopefully not anytime soon. But, I am most comforted to know that wildlife will always have a home on this Appalachian mountain long after I am gone.
Posted by Appalachian Lady at 1:29 PM 14 comments: