More Snow and Lots of Birds

UPDATE: Feb. 2--Groundhog Day. Phil saw his shadow so it's 6 more weeks of winter. Here, though he would not have seen his shadow since it's snowing again today. Does that mean that spring is close?

Yesterday, my husband measured 9 inches of snow after the night's storm. When I ventured out a few hours later, it seemed the fluffy snow had already compacted to about 7". Today, the temperature rose to 43, starting a thaw. But I managed to snap a few photos before then. 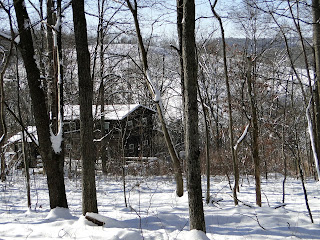 Looking down on our house, I realize how much we are in the woods. 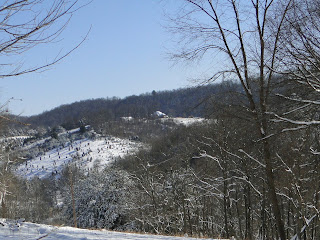 In the opposite direction, I see one of our close neighbors (over 2 miles away) across the hollow. They live in a geodesic dome--can you see it? 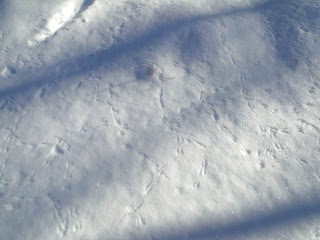 These bird tracks are from this morning since it snowed another 1/2 inch last night--probably from the more than 30 juncos that flocked to our feeders today. 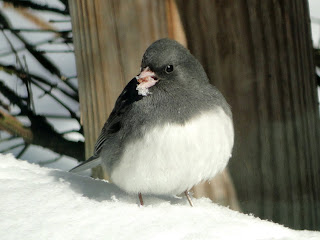 The Dark-Eyed Junco is eating one of the last berries from the burning bush shrub. 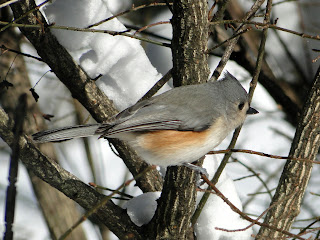 The Tufted Titmouse is a bird I often overlook because it is so common. This bird is great for warning about predators and for eating up the dead bees around the hive in the morning. 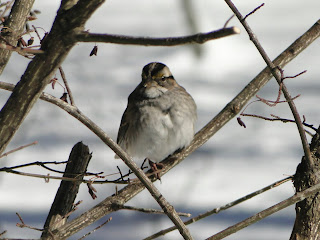 I am not sure of the ID here-think it's a White-Throated Sparrow but he looks a little different. 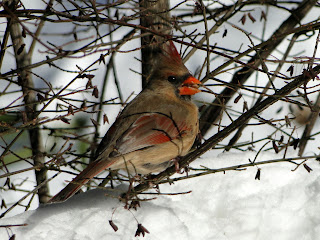 Of course, the Northern Cardinal is always here... 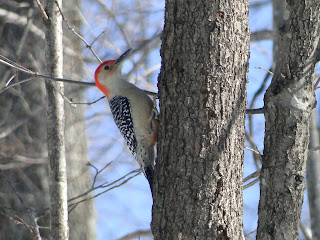 ... along with the Red-Bellied Woodpecker.
Posted by Appalachian Lady at 3:40 PM 9 comments:

Flooding before another Snow Storm 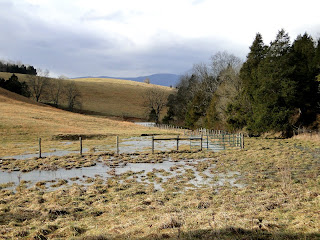 On Sunday night, several inches of rain fell on top of the saturated ground, resulting in another flood. This view above of our valley is of an intermittent creek that flows into Big Walker Creek which rose above its banks to flood the road. Our road actually had this creek flowing over it for several days before VDOT finally fixed it. The creek will probably stay until late spring, attracting waterfowl. I have seen a Great Blue Heron and another shore bird fly off when I drove past.

I made a fire in the wood stove to warm the house in advance of another snowstorm tonight and tomorrow (7-11 inches predicted). I am glad it's snow instead of the ice that Oklahoma received. This is the third snowstorm this winter and all have happened on the weekend. We also have had two floods, one right after the Dec. 5 storm) and the one this week. It's been a wet winter this year.

The winter seems more like the ones we had when we first moved out here in the mid-1980s. We got a lot of snow back then. I remember we both drove vehicles that did not have 4WD and we couldn't make it up the driveway for weeks at a time (with a 1/3 mile driveway that was a real hassle). We soon traded those in for 4WDs.

I hope to take some photos on Sunday when the sun will be out after the snow.
Posted by Appalachian Lady at 4:01 PM 2 comments: 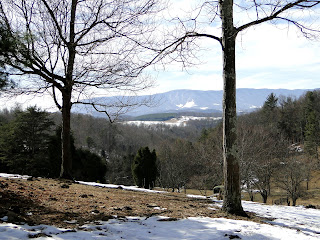 Yesterday, the temperature climbed to 52 degrees so I went on a long walk to the back pasture of our land. The above photo was taken from the pasture. Most of the ponds were still frozen--to my dog Kookie's dismay. The only one that was partially melted was surrounded by cows so Kookie didn't get a chance to do her winter dip. 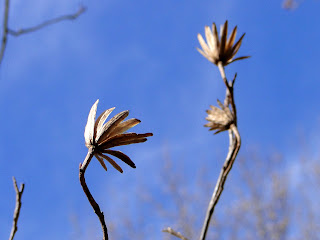 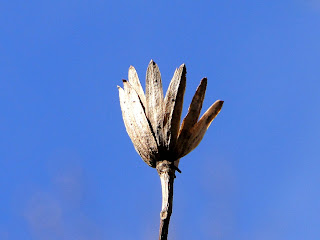 The Yellow Poplar tree has these dried sepals on them. They're large--2 to 3 inches and look beautiful against the clear blue sky yesterday. 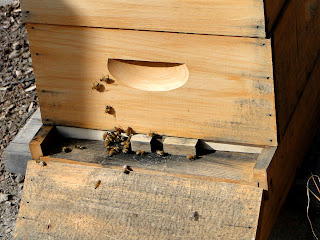 Yesterday was the first time I saw my bees out since Christmas day. They cleaned out the hive--putting out a pile of dead bees.

I bought a "pollen patty" from my local bee club. I put it on on the inner cover and about a hour later, I checked to see several bees on it, eating away as well as several bees coming up through the cover hole to check me out and then went up on the patty. I think the patty is good since I didn't really see a whole lot of pollen stored on my last inspection in November.

I lifted up the top box to check its weight--still heavy with honey so they have plenty of food. I think the bee cluster is in the middle box but I won't inspect until weather warms to 60 degrees--always a possibility. 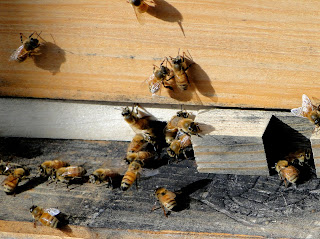 Glad to see they survived that long cold spell along with me. I already sent off a seed order to Gurney's--noticed about half of it was flower seed for the bees!
Posted by Appalachian Lady at 11:07 AM 7 comments:

It's cloudy today with snow flurries and the temperature reaching 31 degrees by 2:00 p.m. I'm looking forward to the warm up the next couple of days when the temperature may reach a high of 47 degrees! That will feel like spring after the long cold spell of the past week. 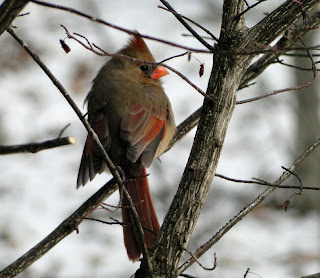 This female Northern Cardinal hid in the burning bush (a non-native loved by bees and the birds) while a sharp-shinned hawk was nearby. The hawk was in an oak limb above the feeder just waiting for the birds to come back. The birds in the surrounding trees and shrubs froze until the hawk flew off. 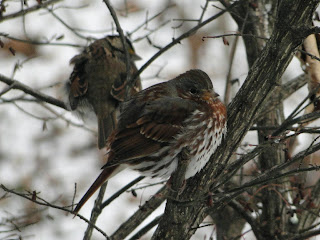 This Fox Sparrow fluffed his feathers to keep warm the other morning. I counted 6 fox sparrows below the feeder the other day, vigorously digging in the soil. These birds are easy to spot because they're larger than the white-throated sparrow, also a winter visitor. They will migrate later this spring to the boreal forests of Alaska and Canada. So, I guess they think it's summer here in Virginia.
Posted by Appalachian Lady at 1:42 PM 6 comments:

"Joy is a Miracle...like Flowers in Winter"

That phrase was on a card I received over the holidays. Today, I went outside in the bitter cold (23 degrees and windy) and took the following photo which seems to encapsulate the idea. 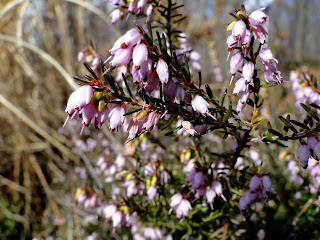 The flowers on this heather shrub have been blooming since late November. It seems like a miracle that the flowers survived 14 inches of snow that was piled on them for a week. 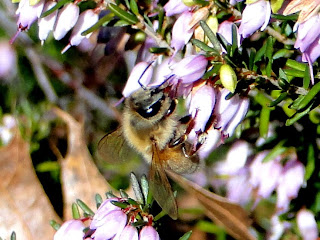 When the temperature rises to the high 40s, the bees will come out to feed on the shrub which they have to themselves (no wild bees out in this cold). I'm assuming my heather is the Bell Heather (Erica cinerea) which grows in the Scottish Highlands. The honey the bees make from the heather nectar is prized for its dark, caramel taste according to the book Honeybee: Lessons from an Accidental Beekeeper by C. Marina Marchese.

Although a lot of snow has melted on the south side of the mountains, the north sides are still deep with snow. I don't remember snow hanging around this long. On New Year's Eve, we received another 2 inches of the pretty stuff--better than the freezing rain that was predicted to fall. Here's some photos I took of the snow and ice. 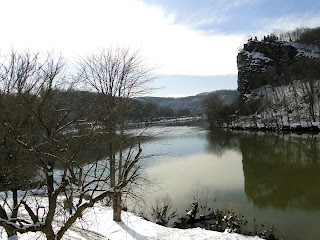 This photo was taken on Pembroke Bridge a few miles from where I live. Just below is the canoe and boat take out area. 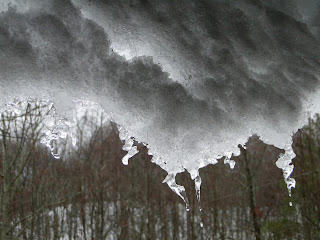 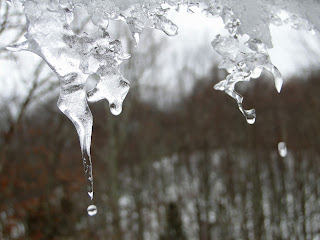 On Christmas Day, the snow had slid off. 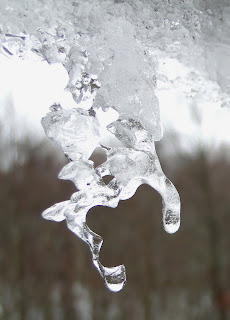