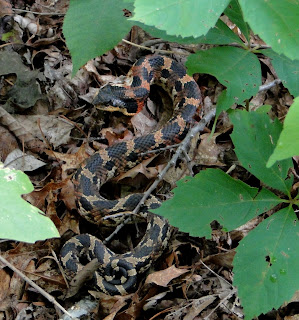 Sophie, our cat, first spotted it and then Kookie, our boxer/lab, ran over and began her "snake" bark. Kookie is scared of snakes and would not be any closer than a foot from it. I went into the house to grab my camera. 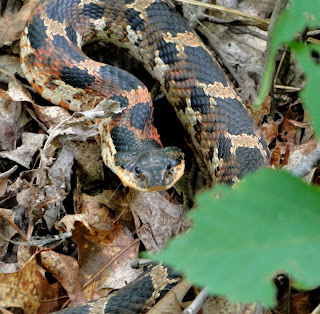 With Kookie still barking, the snake had spread its head and neck and gazed toward me, hizzing all the while. That's how I knew it was a hognose. From this angle, it's hard to see the characteristic upturned snout which gives the snake its name. He uses the snout to dig up buried toads--plenty of those around here. This snake looked over 3o inches long--close to the mature size. 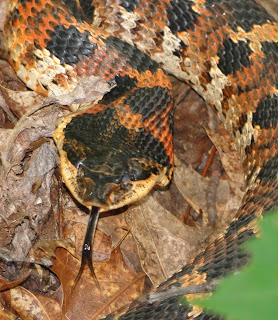 This photo was taken with the flash--hence the more yellowish tone. I had seen a hognose many years ago but that one was colored much differently--much lighter. So, it's hard to identify by color although the markings are similar. The hissing and flared head behavior was a dead giveaway for the hognose. That is how I knew this snake was all bark and no bite. Back then, I was so scared I backed off without getting a photo. My husband went out and moved it with a stick--it flipped over and played dead, another characteristic of the snake.

But I didn't want to bother the snake. I grabbed Kookie by her collar and led her back to the house. She did not object--thankful that I had saved her from the snake encounter. When I went back, the snake was gone.
Posted by Appalachian Lady at 10:12 AM