Early Trillium, Spring out of Whack

This morning I read a great opinion piece in the New York Times titled "Early Bloomers" These were my observations for some time--that spring is arriving earlier and that this might not be a good thing. The authors talked about some plants flowering earlier while others at their usual time, thereby putting things out of balance. This spring seems like an extreme case. With temperatures in the 80s in February and March, my number one invasive species, multi-flora rose had a great head start. When the bloodroot bloomed at its usual time, it bloomed thru the already green shrubs. and golden ragwort which had already started blooming. It was sad to me as I enjoy seeing the stark white of the bloodroot flower against the brown leaves of the forest floor.

Some native plants though did take advantage of the warm weather... 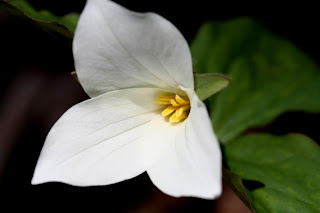 My trillium usually bloom no earlier than the third week of April so April 2 is highly unusual. I looked back on my blogs and the photos usually were taken in late April. My paper journals going back to 2003 also document late April blooming of Trillium.

The Columbine bloomed at the regular time, early April, and already started going to seed. But, my hummingbirds aren't back yet. Others in this area have reported hummingbirds coming back a little later also. So, I don't know what is going on.

More thoughts and photos on this later but I am going to do some blog reading to see if others are seeing the same early spring.
Posted by Appalachian Lady at 8:25 PM