The Life of a Black Swallowtail Caterpillar--updated

On July 31, I watered my parsley plant and noticed this small caterpillar wiggling when the water splashed on him... 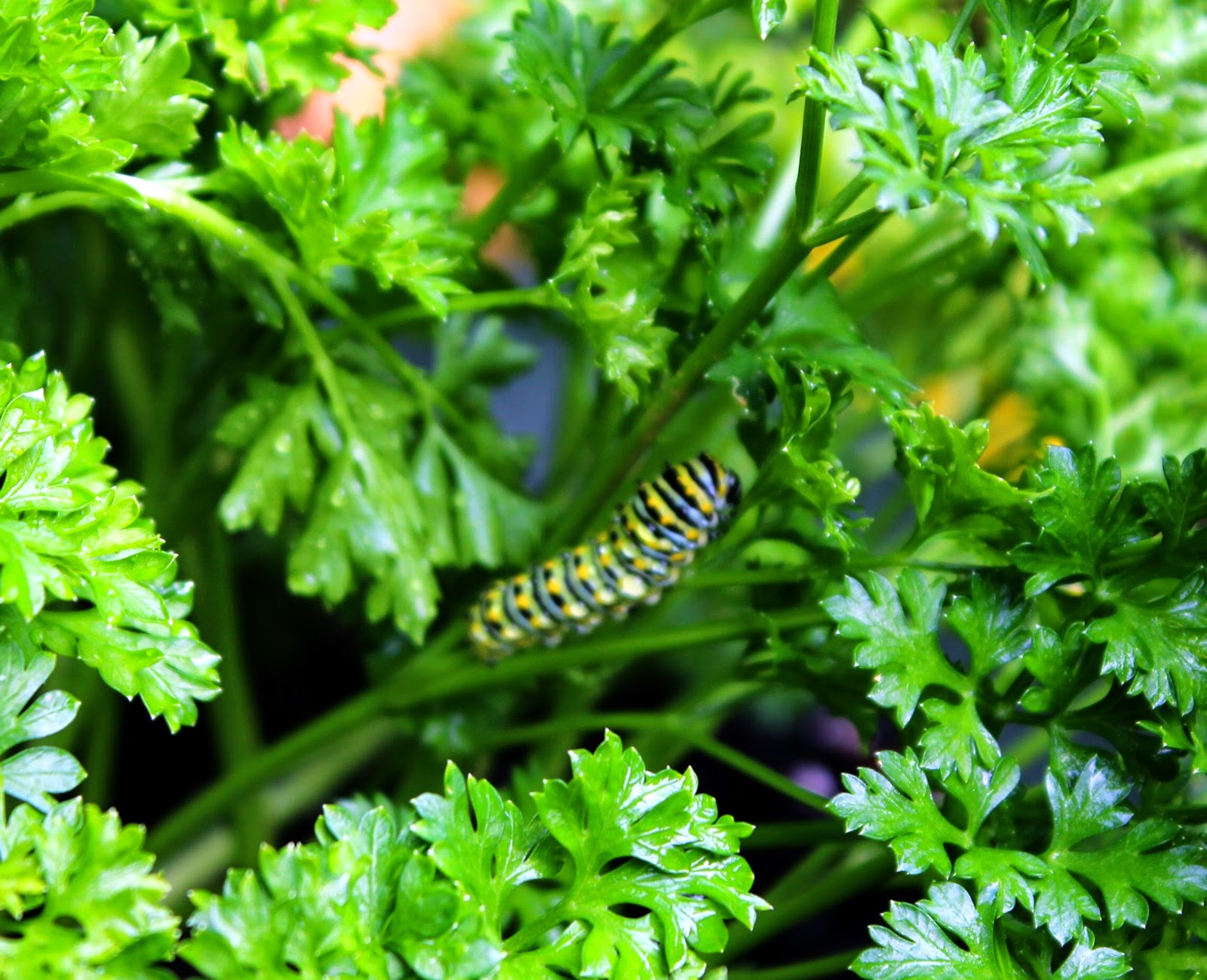 I missed a lot of instars (earlier caterpillars) before I saw him--some naturalist I am! 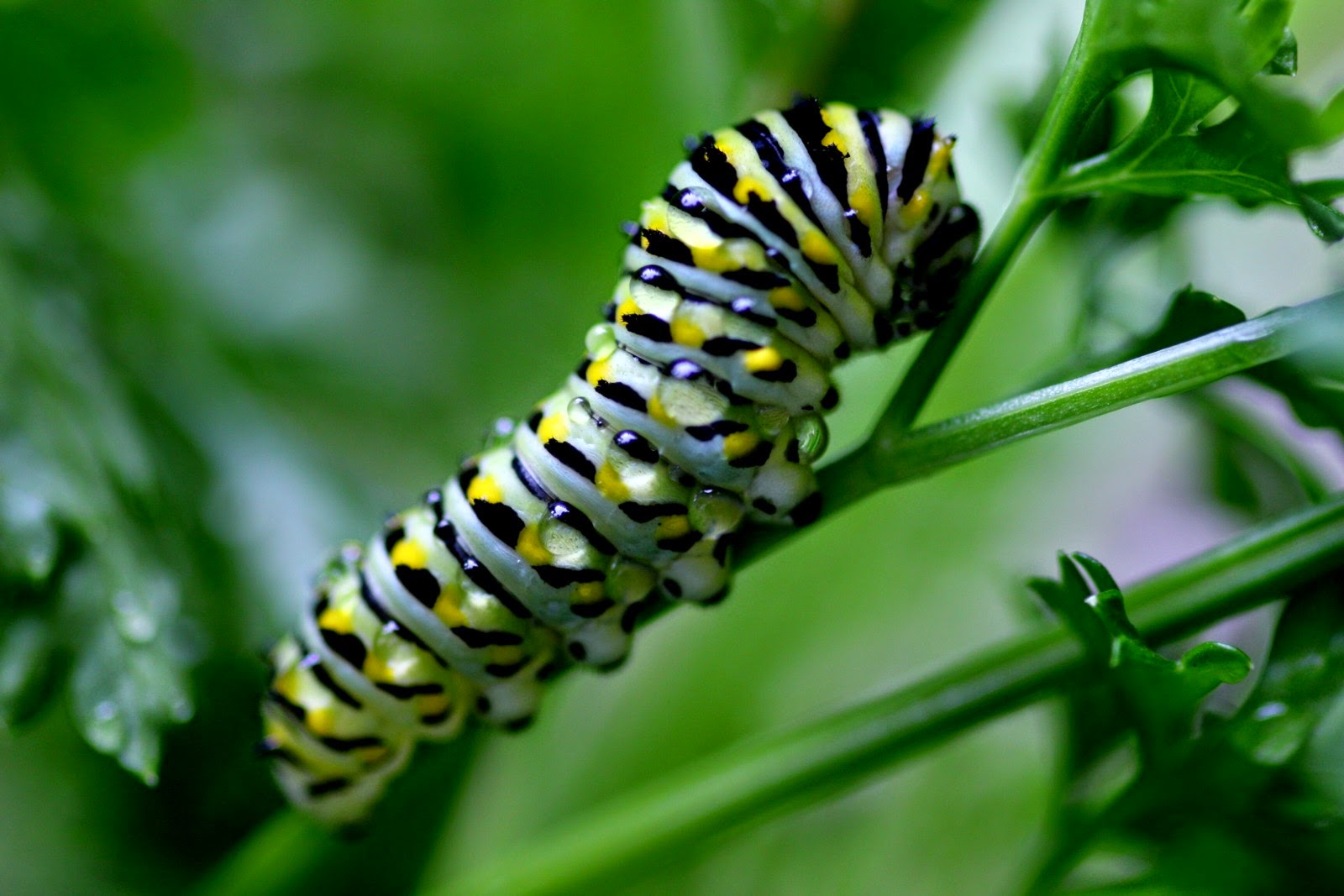 This is a close up view where you  see the water drops from my watering can.  He looked like he hadn't eaten much of my parsley thankfully. 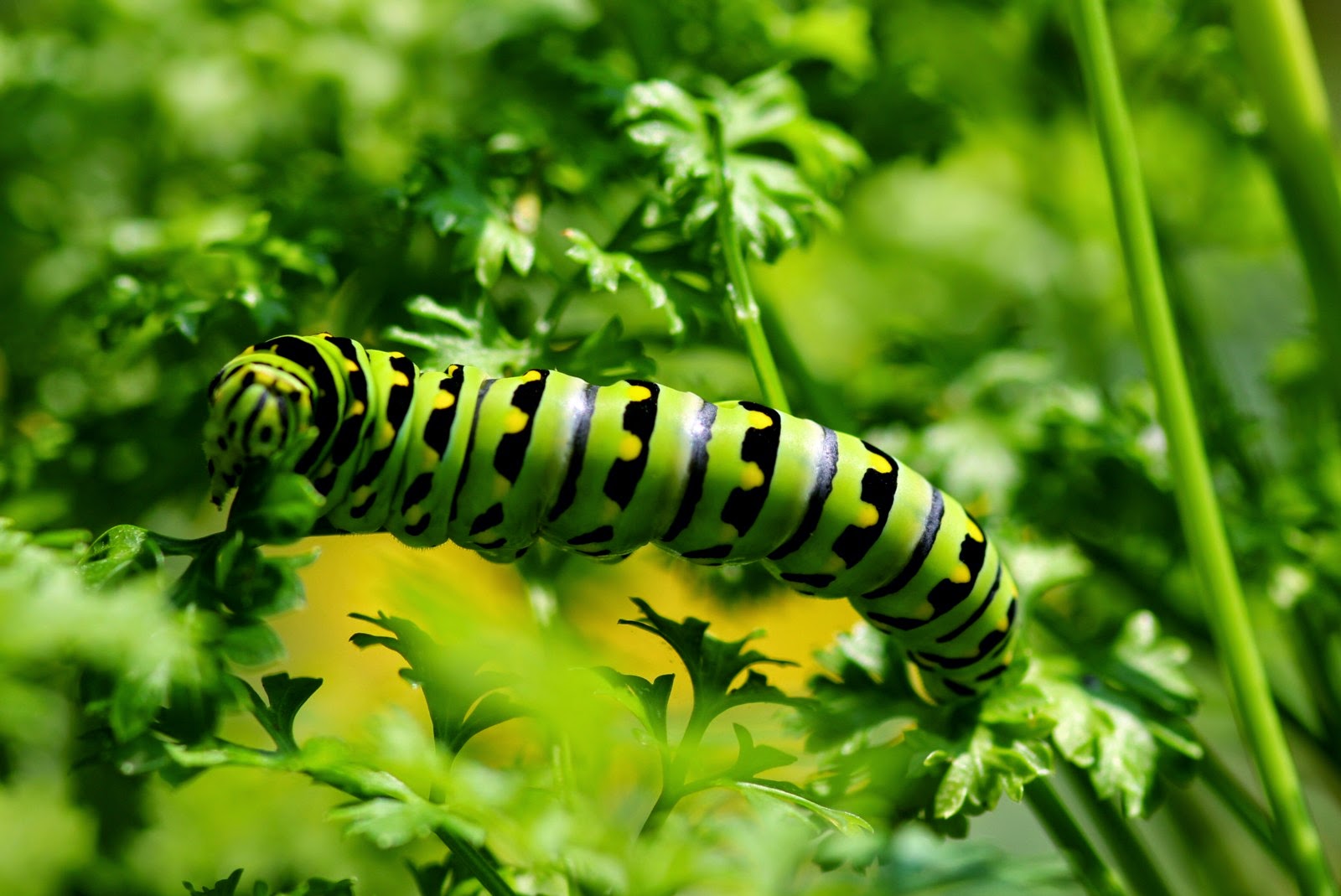 
The caterpillar grew big and fat as he quickly ate the parsley.  I noticed he would eat voraciously and then rest for awhile.  I wished he would eat the outer leaves since it would not have been so noticeable.  I hoped he would not eat all of it since I only planed this one pot of parsley.  Yet, there was no way I would get rid of this fascinating caterpillar. 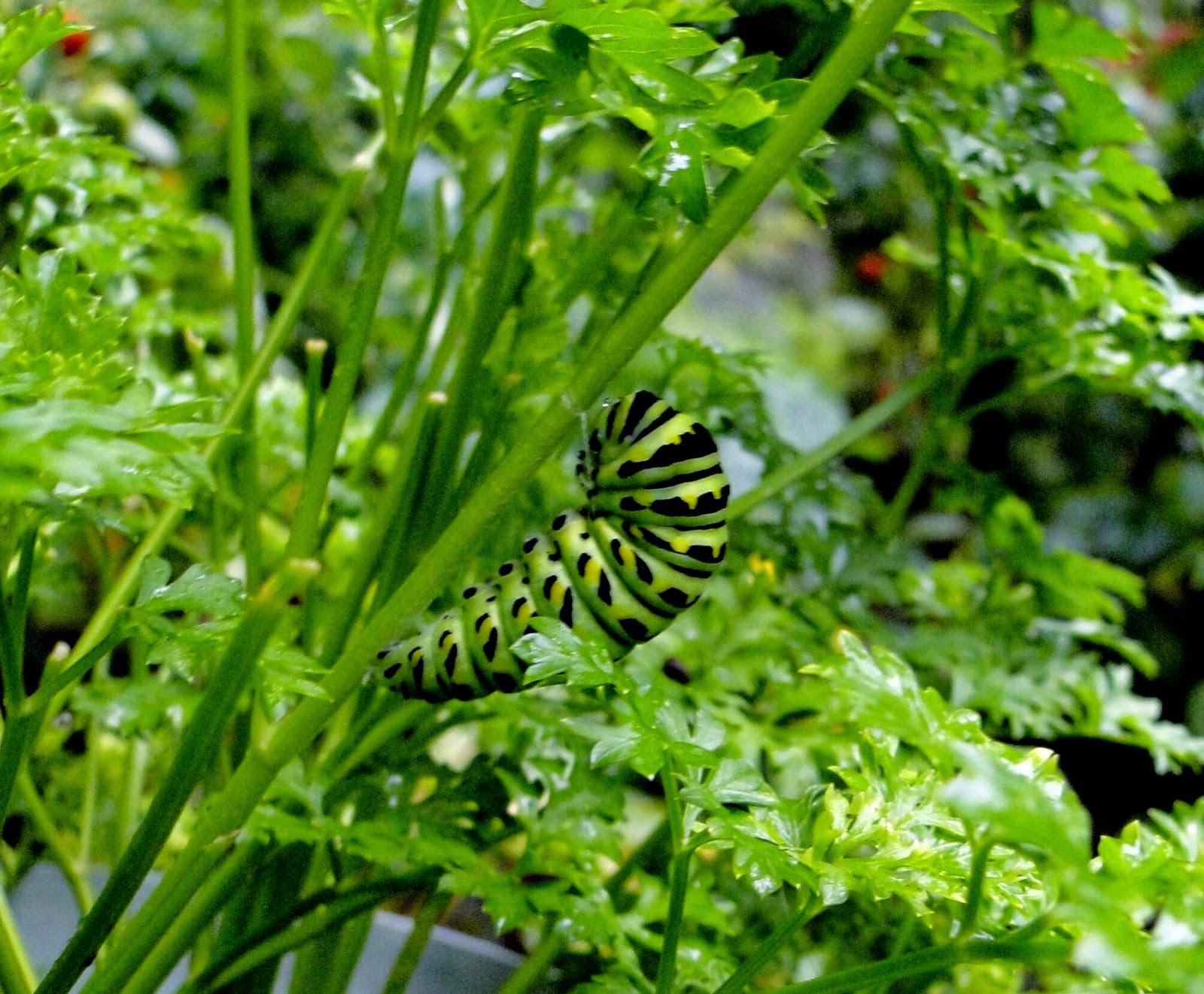 August 10, 2014
On August 10, the caterpillar got into this position I had not seen before. 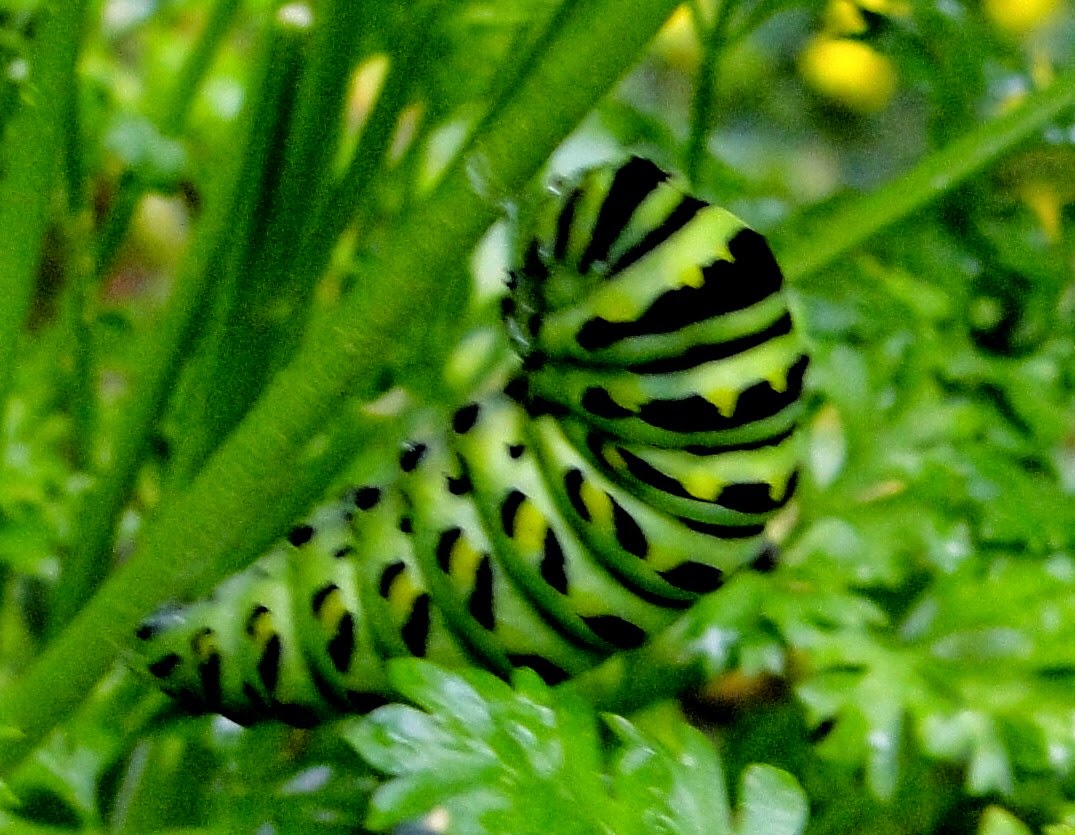 This close-up shows how he attached himself to the stem.  Then I knew he was going into a pupa.   I checked on him a lot that day and the next. 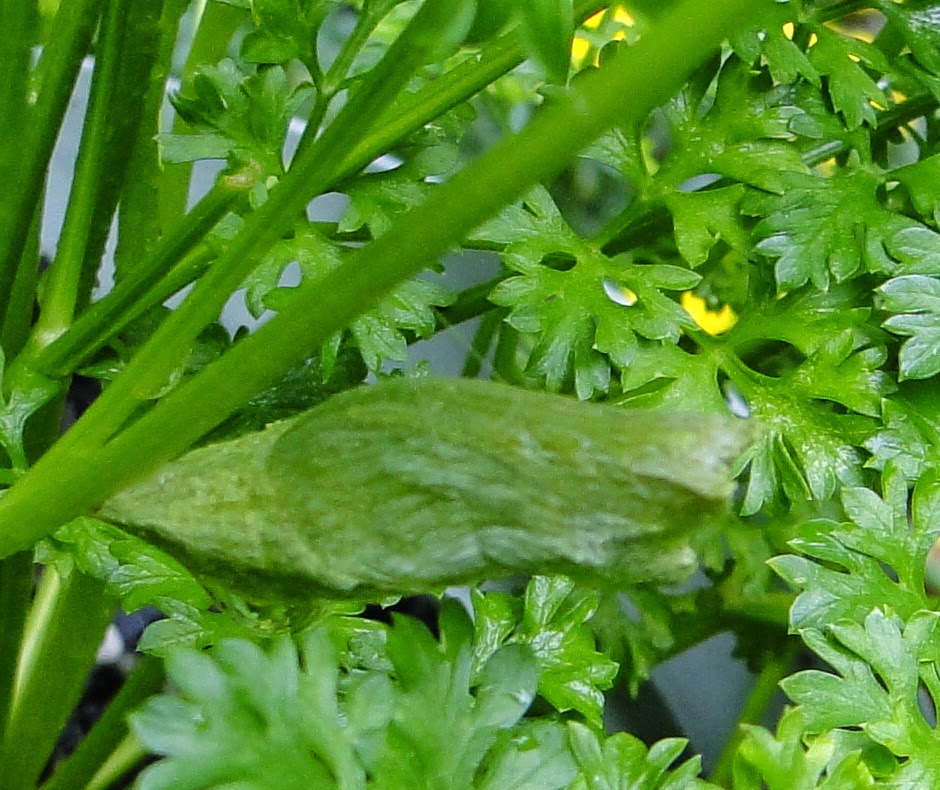 He finished making his pupa on August 12.  Maybe he had done it overnight I am not sure but I missed the process.   I saw that he had only eaten about 3 or 4 parsley strands so there is plenty left for my cooking. 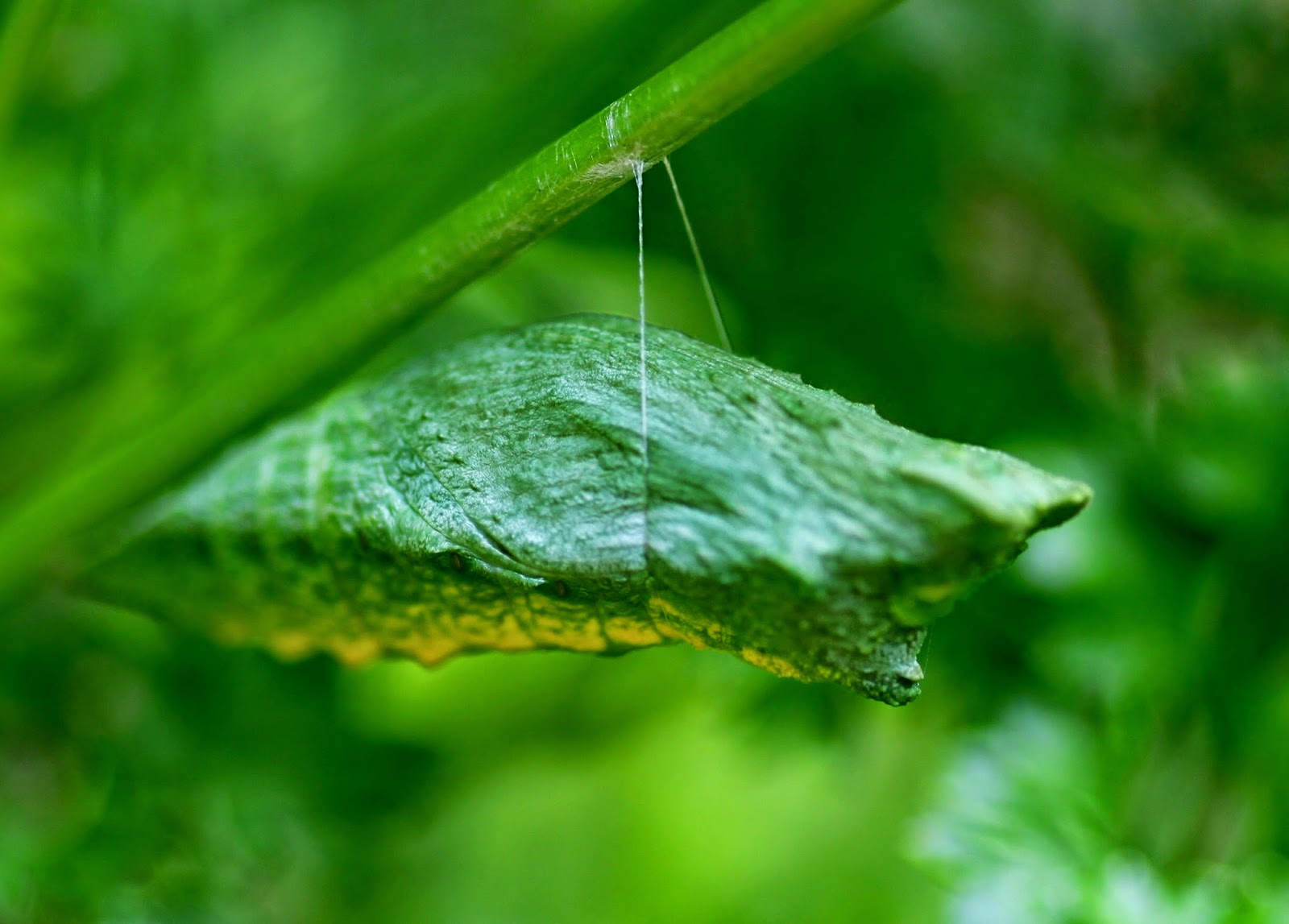 I am amazed that the pupa has survived the many rainstorms with just that single strand of silk holding it. It appears to be smaller than the diameter of fishing line.

Today is August 23 and the pupa looks pretty much the same.  I worry that a bird might get him or that strand might finally break.    I am awaiting the birth of a black swallowtail butterfly and am afraid I won't be there to see it.   The life of a naturalist is sometimes fraught with worry!

I am going to make a note in my gardener's journal to plant lots of parsley next year.  I may plant with native flowers so the newly hatched butterflies will not have to go far for nectar.

UPDATE:  The pupa turned brown.  I had heard from a biology professor on Facebook that the pupa might overwinter so I put under chicken wire (hardware cloth) to protect against birds and the weather.  Today (Sept. 4) I noticed a distinct change in the pupa.  I thought the butterfly had emerged since the pupa looked empty but it is translucent and no opening noted.  I think the butter fly will emerge soon!
Posted by Appalachian Lady at 1:35 PM