I had this on Twitter but no one commented so I put it up here. Last week, I was up on our back pasture collecting old hay for mulch. I was driving our UTV (like an ATV but with cargo load). I heard a bird calling frantically. I stopped the vehicle and walked back, thinking I might see a snake or other predator. But, a Red-Eyed Vireo was trying to get me away from a nest I thought but I searched in nearby trees to no avail. 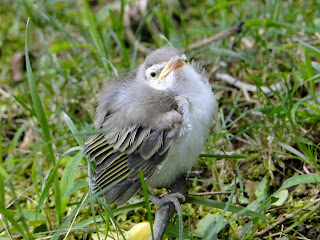 Finally I spotted this baby Vireo on the ground. As I edged closer, he looked at me but didn't seem too frightened. Hopefully, he was able to fly toward his mother who was in a nearby tree.

I don't know what it is about the Red-Eyed Vireos but I have seen many of them this year. When the field guide says they are common in wooded areas, they mean it.

Yesterday, I saw a baby Blue-Gray Gnatcatcher in a crevice of a landscape log (also popular with my cats for scratching). I watched the father frantically calling to the fledgling to fly to him. After awhile, the young bird did fly up into a dogwood tree. Then they both flew away to the safety of the woods, far from the cats.

At the feeders, I saw male purple finches feeding their young too. I see this pretty often as the fledglings make a lot of noise and so I check the feeder.

P.S. I took the advice from the previous comments on how to post this photo. it's still not as clear as the original photo.
Posted by Appalachian Lady at 3:26 PM