It rained so much in July I didn't water my garden once. Although the weather kept me inside, I did manage to get in a few walks in the woods (paying for it with chiggers and mosquito bites). 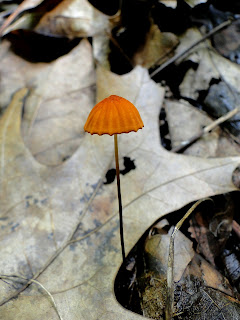 This tiny mushroom (cap only about 3/8") had just emerged on a slope by the driveway. 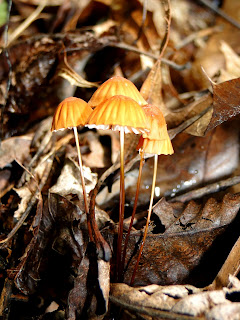 When I came back up the driveway after the walk, I noticed a clump of the same mushrooms illuminated by sunlight. They are so cute--they look like you could put one in a mixed drink. 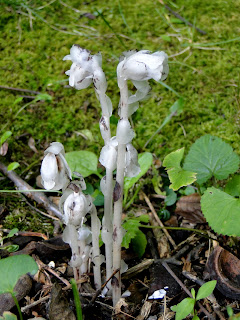 This plant sprouts up in the mulch around trees. It's probably not hurting anything but feeding on the decaying plant material. 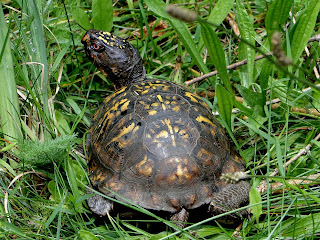 The wet weather also brings out the box turtles. My husband brought this huge box turtle up from the road because he was sure someone would run over it. A few days later, the same turtle was seen near my blackberry patch. I tossed a few blackberries on the ground and he started eating them. So, I rushed in the house to get my camera. Having finished his snack, he was headed into the briars but I think you might still see the blackberry juice on his face!
Posted by Appalachian Lady at 1:19 PM