I have two cameras--a canon SLR and a point and shoot.  I tend to grab the point and shoot more often than the SLR so the other day I was surprised to see what was on my Canon picture card.  The oldest shot was from May... 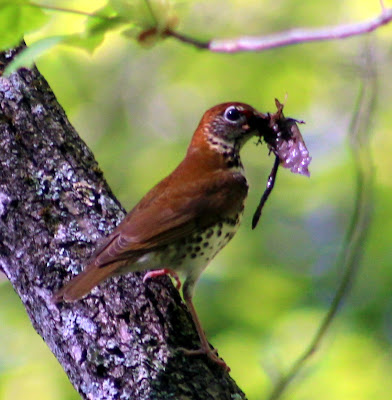 I remember walking down the driveway and seeing this wood thrush.  He or she kept circling me and landing on tree limbs.   I thought the thrush was trying to lead me away from the nest.   I photographed the bird several times but this shot was the best.  Only when I saw the photo on the computer did I see the nesting material. 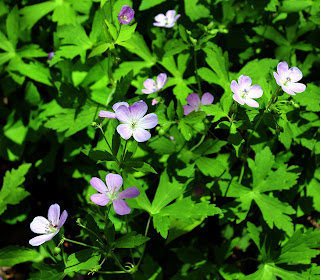 I also photographed one of my favorite native wildflowers, wild geranium, which fills our woods in May. 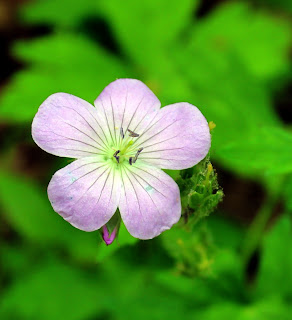 A close up of the flower shows lines radiating out.  I read that these lines are supposed to guide the insects, usually small native bees, to the center where the nectar is found.  I am not sure how scientists figured that out. 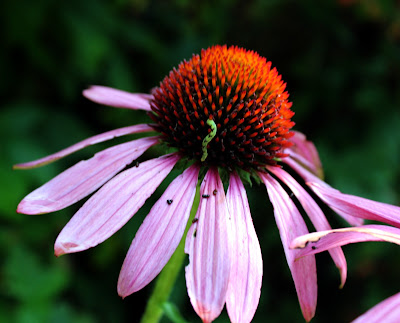 My coneflowers did better this year, maybe because of all the rain.  I don't know what this tiny caterpillar is but he stayed on this flower most of the day.   I have seen a lot of soldier beetles and crescent butterflies on the flowers but most of the butterflies were on my butterfly bush. 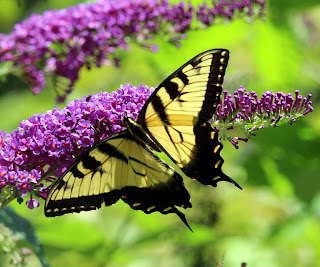 The butterfly bush grew well also.   On the very few sunny days in August, I counted over a dozen of butterflies, mostly swallowtails but also fritillary, red-spotted purple, eastern pipevine, skipper as well as honey bees and hummingbirds. 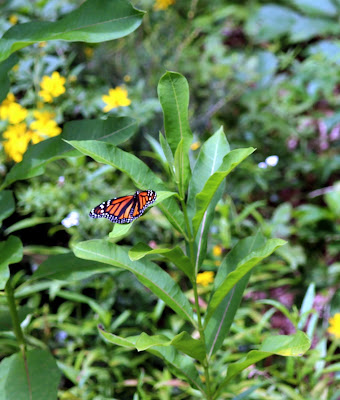 I spotted this monarch at the end of July--the only monarch I have seen this year in my backyard.  Now, I know why I let the milkweeds grow.   While the monarch butterfly feeds on many different wildflowers, the caterpillar only feeds on milkweeds.  Orange milkweed will probably look best in your garden but I have let the common milkweed grow as well 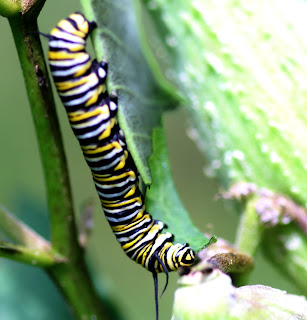 This caterpillar was found on the very same common milkweed plant about 3 weeks later.  He gorged on leaves for a couple of days, then disappeared, no doubt to make a chrysalis so that he can emerge as another butterfly.   For more information about monarchs,  go to the Monarch Butterfly Website .

My lessons from this post:
1. Plant more native wildflowers, especially milkweeds, to attract bees and butterflies.
2. Take my Canon with me more often on walks. It's not that heavy!
Posted by Appalachian Lady at 2:46 PM